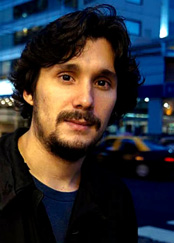 To me there is one filmmaker in the new Argentine cinema who is a step above the others, and that’s Lisandro Alonso. After roughly a decade of gestation, the Argentine new wave is now fully visible and ready to be looked back on, beyond the hype, to the films and filmmakers themselves. To do this, I ask: Which directors express a concern not only for what they know but for that which can’t be articulated and that only the form itself can express? That is, not only Argentina and cinema in Argentina, but the world, and cinema, and everything we know. I can propose the two films Alonso has made to date, La Libertad (2001) and Los Muertos (2004) – the latter still making its rounds at festivals since its premiere in Buenos Aires last April.

Why Lisandro Alonso? Partly for appearances: as the following interview reveals, he’s embattled with the idea of being accepted, but draws the line at the point where most directors are pushing their ideas and budgets further with each new work. From La Libertad to Los Muertos there is no digression from his vision, no attempt to be more conventional, to call attention to what some might label “daring” or “innovative”. It’s the likeness between the two that tells us Alonso is the kind of artist who found all the tools he needed at the beginning, and has continued to explore them contentedly and at his own pace.

Beyond the surface, there’s the films’ peculiar relation to reality that can be looked at as an autobiographical impulse – a realisation on Alonso’s part of finding a kinship with, as he says, “those who speak with silences, who speak with actions, and try not to hide their egoism.” These are the characters who inhabit his films: Misaël, the woodcutter in La Libertad, and Argentino Vargas, the ex-inmate who seeks out his daughter in the jungle in Los Muertos. They are the purveyors of a lifestyle that city people, of Alonso’s hometown of Buenos Aires, would often rather forget. But Alonso’s films don’t pretend to save the poor; nor do they gaze morbidly at provincialism.

Never limiting himself, Lisandro Alonso approaches the basic functions of survival with basic functions of cinema. He is obviously in a privileged place to present us with such a vision of purity, the likes of which are still rare, not only in Argentina but anywhere in the world.

Lisandro Alonso: I always lived in Buenos Aires, but about ten years ago, when I was finishing cinema studies at university, my father purchased some land in the country. I took a pause with cinema and went there for two years. It was there that I found Misaël. I was always interested in what was outside of the city. The people, they’re more elemental, more pure, less complicated. They talk less. I have little faith in words. I think humans hide themselves with words.

Before I went to the country, I had seen certain cinemas, films from Iran, India, that were about poor people. I always thought these films were more interesting, but I had never thought of making films until I met Misaël. Misaël may be different to me, but we share much of the same feelings.

I found Argentino Vargas when I was scouting locations. I went on a canoe and asked the man who was our conductor to take me to meet people from the area. I gave him the characteristics that I was looking for, and he showed me three or four guys. The first two were alcoholics and not very trustworthy; the third just didn’t work; and then came Argentino. I put up my tent and I stayed with him for two or three days. I asked him if he wanted to be in a film, and he said, “Yes”, but he said it so quickly that I didn’t know if he understood me. Afterwards, I spoke to him about money, and I could see that he caught on because he could treat it as real work.

I returned 15 days later and he wasn’t there, but his wife was, and she told me he was away, very far, working. So I said, “Say to him that I’m going to pay him this amount of money.” When I returned a couple of days later, I saw he was there.

The first steps of the project

LA: I always think of a place and then I find a character and a story. I knew I wanted to film in a jail and in the jungle. I started to write a story that dealt with these two places, and their inhabitants – generally, very poor people.

I travelled for about a year in different provinces, starting in the north, in Brazil, and then I started to go down, splitting it up into different trips, two weeks, three weeks, four weeks … until I found this place in Corrientes. I liked it because people still lived in the middle of the jungle. 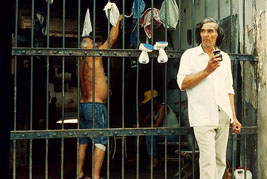 LA: I’m interested in the world of prisoners. In Argentina, and many places in the world, only the poor are gaoled, not the rich, since they can defend themselves. It interests me how a prisoner acts, and if he thinks anything about being free, or not being free. I wanted to show that for these people it’s the same to be in gaol as it is to be out. You live in the same way. And I wanted to show a prison that was more tranquil, a minimum security prison, that was easier to compare with the outside way of life.

LA: Once he is out of gaol he goes on a trip to visit his daughter. Many people wouldn’t go on this trip; they would go to the city to find work. This is a person who was raised in the jungle, and must return to this place. The fact that he’s going after his daughter is just an excuse to show how he begins to see the world again after 20 or 30 years, and for us to see how he lives in this moment. There’s no expression, no sentiments; everything is the same.

The character spends two days in the gaol, and two outside. The amount of days might seem trivial but it’s important because, when I write the script, I always think of the time-span in which the story takes place. When you know the amount of days, you know what times of day you have to shoot. If it weren’t for this, Argentino’s journey might seem like a month, or years. What I wanted to capture was his very first impression of the world.

LA: I would explain a situation; for example, “in this scene you’re going to buy a shirt …”, or “in this scene you’re renting a boat …”. Before shooting, the only thing I told him was, “Don’t look at the camera and don’t show any expression.” He surprised me because we never had to stop a take because of him; it was always due to problems at our end. Sometimes we would construct things together – for instance, whether or not he would talk about his brothers. He would give me his point of view.

LA: As in La Libertad, I like to use music to give my films a time period. Without music, these films could take place 15 years in the past or in the future. I’m interested in separating the visual from what you hear; the primitive in the images and story are contrasted with the modern sound. Also, on one side you have the social and the political, and on another side the cinematographic, but these two always have to be at the same level. 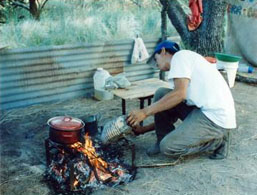 LA: I’ve always felt more respected outside of Argentina than inside of it. Los Muertos premiered in Argentina with an audience of 3,500, which is nothing, but it makes me happy because with La Libertad we only got 2,500. The film was shown on only one screen, and now it premieres in France on 15 different screens. Anyway, I understand that in Europe and in the United States they have more money, and people can be more curious and can go often to the movies. In Argentina, they only have money to see the film of the month, whichever people are talking more about, whether it’s Harry Potter [and the Philosopher’s Stone, Chris Columbus, 2001] or The Matrix [Andy and Larry Wachowski, 1999].

With Los Muertos, I wanted to go a little bit further than La Libertad. It’s difficult to prove to yourself that you can make another film, that the first one wasn’t just luck. But that security gives me freedom. And after making a few films, and I have nothing left to say, I can go back to the country, and work with animals, or set up a newsstand, or play the piano, or paint …