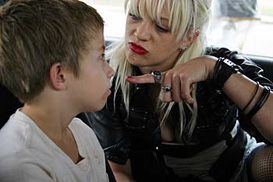 Asia Argento, woman director and star in her own new movie, The Heart is Deceitful Above All Things (2004), does something remarkable – she doesn’t try to look good. In fact, she looks like hell, and I know few directors, and fewer stars who are brave enough to show their unmitigated dark side, with all its swollen reddish green blemishes, splotchy skin, inability to love, desire to hurt – all that true to life ugly stuff that we usually prefer to hide from others and ourselves. Asia lets it all hang out.

Heart received less than warm enthusiasm at its Cannes premiere earlier this year. Most audiences, I guess, are looking for reassurance from their cinema. Heart does not reassure. In Asia’s world, women stars don’t have flawless skin, sex is yuk, and life is ultimately going to betray you, in the false name of love.

I liked the film because it doesn’t sugarcoat anything, especially not family relations. Asia Argento is more than completely believable as the drug-using, whore-mother “Sarah”. Her destructive, extremely narcissistic need for her son, and his strong bond with her, say much about the ties that bind.

As both mother and sex object, Argento wears her utter unpleasantness on her sleeve, and there’s no prettying it up. In this way, she defies all standard requirements for the image of women in cinema, and this, I suspect, is the real reason behind certain folk’s negative reactions to this movie. On this level, her work is radical.

The film veers chaotically from one brutal incident to the next, more or less from the point of view of Sarah/Asia’s young and continually abused son. One might almost think of Sade’s 120 Days of Sodom, with its unredeemed descent into sadistic lack of love, or John Waters’ refusal to buy into the conventional social constructs that underlie and inform most of the saccharine films we endure.

It can easily be argued that Argento, as a director, lacks both depth and insight. But she takes that lack onto herself, in the body of Sarah, and shines a light right on it. Conscious or not, this film is strong and will be remembered long after many other sweeter, more conventional favourites have faded into unobtrusive oblivion.