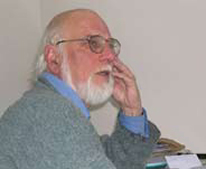 “No man is an island”, warns the cliché, though Bob Quinn has affected a studied insularity since his first films in the 1970s. A self-styled “Maverick” (the title of one of his books), he relocated from the cultural hub of Dublin to a small island off the Irish West coast; he is a Gaelgóir in a country that pays lip service to the native language but favours English (Quinn directed the first Irish-language feature film, Poitín, in 1978). The sea beats against the shores of his cinema as if to confirm this castaway status, an image of the eternal and ever-changing that informs his subject matter.

Atlantean (Bob Quinn, 1983) is one of the least insular artworks ever produced in Ireland, a country that for decades instituted its own official isolationism as a response to centuries of colonial rule. Through education and culture, the State manufactured a Celtic genealogy, positing a pure, rural, self-sufficient race, uncorrupted by foreign influence. The impetus for this nonsense was the late 19th century movement variously known as the Celtic Twilight or the Anglo-Irish Revival, which saw the founding of the Gaelic League to promote Irish language and culture, the publication by the Royal Irish Academy of classic Gaelic texts and reference works, and the development of a “native” literature eulogising the land and the peasant, centred on Yeats’ creation of a national theatre, the Abbey, which last year celebrated its centenary.

Quinn avoids this land’s suffocating roots by celebrating the sea. Atlantean is a three-part film about the origins of Western Irish culture that makes playful use of the Revivalists’ methods to assert a thesis anathema to them. The Revival, ironically, was initiated by aristocratic Protestants, not the natives they extolled, so Atlantean is narrated by an Englishman, scholarly and amused, but condescending to its investigating subject “played” by the director himself (as a kind of mandarin Hulot). It mythologises the West coast of Ireland as more authentic than an East contaminated by culture, just as generations of Irish schoolchildren were force-fed the poverty-praising narratives of Blasket Islanders. It even enlists a Yeats play as evidence. But the “proof” it seeks is not of Ireland’s special separateness as a Celtic nation, but its connection to other cultures, in particular those of Arabic North Africa. Beginning his study with film of an Irish sean-nós singer, Quinn traces unexpected connections between Western Irish and Arabic cultures, through, for example, music and dance, religion, costume and language. He uses the cross-cutting to narrow space and time developed by Griffith and Eisenstein to open out a variety of peoples, places and histories, defining a nation not by what makes it different, but by what relates it to others.

He posits the theory of an “Atlantean” sea people who manoeuvred the coasts of Ireland, Britain, France, Spain and North Africa, linking these cultures through trade, each imbibing and influencing the others. So deeply engrained is the Celtic genesis myth, one sometimes suspects Quinn of leg-pulling, of constructing an elaborate, Borgesian shaggy dog story (complete with accompanying, fully-referenced book). But those who criticised Atlantean on historical grounds were missing the point. It is more fruitful to see Quinn as a kind of Aboriginal cartographer, not necessarily mapping out the physical features of his landscapes (although he is as sensitive to the nature-play of colour and light as any Impressionist) as their less visible traces, the symbolic, mythic, psychic, historical or memorial marks buried beneath them. Atlantean raises a cacophony of voices suppressed, ignored or forgotten by official culture, offering modes of expression (from interviews, performance and narrative accounts to museum artefacts, maps, etchings and architecture) that emphasise the mongrel Irish culture celebrated by Joyce.

This is witty, entertaining and informative in itself, but also a profound political statement in 1983 at the height of Northern Troubles fought by two sides paralysed by impoverished visions of a “pure” history. This makes Atlantean sound parochial and obscure, accessible only to those with some knowledge of Irish history and culture. But Quinn avoids the trap fallen into by most Irish filmmakers, plying some bogus, Hollywood-yearning universality. Like Sjöström, Keaton, Dovzhenko, Renoir, Ozu and Ghatak before him, Quinn understands that true international cinema is to be found in the local.