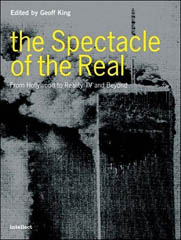 I first opened the pages of The Spectacle of the Real: From Hollywood to “Reality TV” and Beyond, edited by Brunel University’s Geoff King, dreading a deluge of tired polemics and fearing an ultimately apolitical theorising of subjects I considered myself too well versed in to be surprised. The contents page echoed my horror, foreshadowing a tripartite disaster: three sections on September 11, reality television and film. Not only would I be browbeaten by media theorists on how to experience September 11 – again – but I would then have to suffer a discontinuous collection of only flimsily related material. Then, catastrophe; I would begin reading The Spectacle of the Real.

First, a little history. In a visit to New York in May, 2003, I took several photos at the World Trade Centre site – of people taking photos of Ground Zero, and of the memorial signs covered with graffiti – but none of the actual site. A middle-aged bearded man nearby, presumably a New Yorker, asked me why I wasn’t taking pictures of the site itself and taking so many of other people. I responded that I found the graffiti touching, and that I felt taking images of the (de)construction site to be somewhat too morbid. He took mock offense at the idea and encouraged me to go ahead, to “mark for yourself when happened here” because “our heroes don’t mind their stories being told.” Engaging in a frank discussion about the events, and finding a deep common ground between our diametrically opposed political positions (he was a literal card-carrying member of the NRA and Republican Party), we argued loudly but amicably about both the importance of different kinds of remembrance and what it means to live in fear. 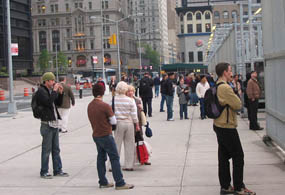 He and I were not the only ones discussing world politics at the foot of the fallen towers. Whereas before the event, the same footpaths may have only been taken up by businessmen and women pursuing great engines of capital, now tourists and locals mingled in amazement, horror, and a peculiar kind of joy of the towers’ absence. A strange carnival on four squared-off streets, looking for a show that has sadly left town. An elderly woman soon joined in our discussion and protested that tourists shouldn’t be allowed near the site, as it was “an American tragedy, not yours.” The response from the middle-aged Republican emblematised my tourist-critic’s experience:

It was called The World Trade Centre! Now it belongs to nobody but a group of rich Saudi snot-nosed punks. The only thing they did to us was steal a beautiful image. The only way we get it back is to reflect on it, write on it, say Godbless, Godbless, Godbless – until there is more good than bad coming from the whole sorry thing. 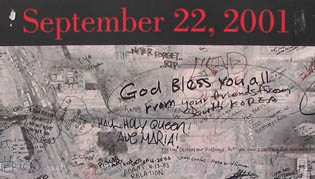 The memorial images at the foot of the towers were simple black and white photographs, aerial views of the World Centre Site before construction, during their time at the heart of the financial district, and during their collapse and aftermath. Each one was covered in a thick layer of other stolen beautiful images: “Hail Holy Queen! Ave Maria!”; “Bush Knew”; “Peace is Patriotic”; “Adam loves NYC”; “We Miss You Kevin”, among countless others. I circumnavigated the site and captured 85 images of other tourists and graffiti in all. An ad-hoc psychological and emotive bullet-time sequence in New York experience. The gesture I had undertaken – to document the humanistic reflections on, rather than a pretension towards, the Real of September 11 – resulted in an experiencing of the very hubris that I was reacting against, and I literally circled the absent centre I was attempting to avoid.

Even the very phrase “September 11” contains cliches formed in crystalline, recursive matrixes that still seem too complex to decode. In the wake of the original events, the ongoing political fallout – literally “radioactive” – and the seemingly endless critical feeding frenzy, a certain phraseological fatigue sets in for the researcher picking through the ranks of titles on spectacular culture. While criticality is the first and most obvious kind of intellectual violence, it is theoretical work concerning real events that possesses some of the greatest tendencies for abuse. It was with heavy-heartedness that I began to read this collection of essays by Geoff King, which also clearly had a high likelihood of mentioning The Matrix films (Andy & Larry Wachowski, 1999 & 2003) at some juncture.

The first section of The Spectacle of the Real: From Hollywood to “Reality” TV and Beyond entitled “Spectacle, Ideology, Catastrophe”, were it to exist without the following sections, would be one of the first works on September 11 which possesses the dense intelligence required to critically analyse contemporary spectacular culture yet utterly avoid the critical violence of an intellectual ownership. It is rare for critical collections to possess compatible critical terminology, instinct and argument across the different writers’ topic and styles, but here there is a real sense of continuity that greatly enhances the argumentative impact. After a short preface by Jay David Bolter, Geoff King’s introduction and his own essay are accompanied by media and cinema theorists Douglas Kellner, Lee Rodney, Kathy Smith and Dean Lockwood. The themes of verisimilitude and conceptual breach are deftly pursued from a range of perspectives, and these writers manage to perform a convincing theoretical circumnavigation of the event itself. In the first essay, Douglas Kellner’s now-familiar strict style does well to elucidate on aspects of Debord that remain under-realised, and although it is clearly built on his earlier work, his essay becomes possessed with an energetic, manifestive quality, proposing nothing short of a “critical theory of globalization”. With any kind of semiotic repetition comes accidental permutation, and by the conclusion of the second essay, Lee Rodney’s excellent approach to Žižek and Warhol’s film Empire (1964), you gain a sense that the differing approaches to the key terminological touchstones – real, the Real, actuality, spectacle, and so on – will become as much part of the reading experience as the ideas themselves. The “breaking news event” is painted as the event that broke the news, leaking as much hysteria and anxiety over the status of the facts as the horror of planes, bodies, buildings.

I changed the channel, from one to another to another, seeing the Twin Towers on multiple screens, confirming the realness of the event in a circular gesture – of circling through the stations, and around the differing viewpoints of the towers. The performers in the centre and the crowd in an ordered circle. Clusters form. The magician always passed his own hoop through the trick to confirm its actuality.

Even the internet, the theme is always that of a circle. Nothing escapes the gravity of a well-linked image. The content of the circle becomes immediately absent once seen.

King’s essay, “’Just Like a Movie’?: 9/11 and Hollywood Spectacle”, positions particular iterations of the September 11 footage in context of both historical disaster footage and key scenes in spectacular disaster films. Avoiding the much-quoted “compulsion to repeat”, Kathy Smith’s essay furnishes a number of key passages from Metz and engages in a degree of psychoanalytic work to pursue the compulsive nature of spectacle. Dean Lockwood’s “Teratology of the Spectacle” arrives with an almost kinetic force, poetically describing the haunted nature of such images, using Benjamin, Marx, Žižek and even Douglas Rushkoff to pursue the concept of media’s viral legitimacy. 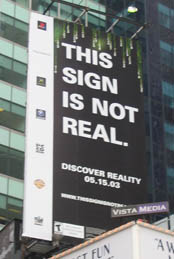 Reality television is pursued in the second section with five essays from Amy West, Misha Kavka, Frances Bonner, Leon Hunt and Bernadette Flynn. Amy West approaches the question of approaching-reality by means of analysing the amateur aesthetic and “inadvertent television”, generating a sense of the instability of the pervasive image-production core of new media life. Misha Kavka develops a close reading of the ethics of actuality and emotionality in the romantic sub-genres of reality television, deploying in-depth research into what is still a young television genre. In contrast, the essay by Frances Bonner asks how images of gruesome operations became part of mainstream television, developing the threads left by Gunning and Lisa Cartwright, and drawing out new, dense material in the process.

Leon Hunt’s essay, “Hell in a Cell and Other Stories: Violence, Endangerment and Authenticity in Professional Wrestling”, is one of the most keenly developed essays on wrestling, encapsulating the dizzying gyre of realities that circulate around the bizarre carnivalesque realm of the continually pseudo-actual. In a textual analysis of one of the sport’s (and consequently, television’s) most complex moments, all of the genre/sport/system’s textual possibilities play out and are thoroughly developed. “Docobricolage in the Age of Simulation”, by Bernadette Flynn, ends the section on television with a delicately balanced comparative movement through the Big Brother television phenomenon and The Sims computer games, focusing on observation and simulation.

The final section focuses on film, and features essays by Michele Pierson, Lisa Purse, Paul Ward, Julian Petley, Peg Aloi, Mike Wayne, Michele Aaron and Tanya Krzywinska. Michele Pierson’s essay literalises the issues set out in the volume by identifying key conceptual framings for production design in films, importantly pegging authenticity as a practice. Lisa Purse’s approach to bullet-time special effects encapsulates the visual flaunt of temporal play in action cinema. Paul Ward deploys a vivid analysis of the reals of animated films, specifically the dream-conscious Waking Life (Richard Linklater, 2001) and its moments of uncanny approaches to the actual. In “Cannibal Holocaust and the Pornography of Death”, Julian Petley takes “the aura of snuff” head-on with generous research and an inspired path through the issues of the verisimilitude of screen murder. Fittingly, Peg Aloi’s essay on The Blair Witch Project (Daniel Myrick & Eduardo Sánchez, 1999) follows Petley’s, somehow resulting in a fascinating contrast – the almost-real of the former to the actually-fake of the latter – giving a sense of deep ambiguity at the heart of such haunted images and sounds that detaches them from narrative contexts and gives them spectral significance. An essay by Mike Wayne that utilises Marxist approaches to analyse the filmic worlds of specters and ghosts, is useful for decoding the commodity of the spectacle. The problematic issues of looking-at-looking come to the fore in Michele Aaron’s approach to the self-reflexive cinematic position, specifically where breaches occur in the image-production continuum.

Ending the volume, Tanya Krzywinska’s “The Enigma of the Real: The Qualifications for Real Sex in Contemporary Art Cinema” is an intellectually dense and deeply engaging examination of how sexual depiction comes to be so problematic for audiences and censors, and how circuitous the routes to filmic reading can be. Coming as it does at the end of a collection of accomplished essays, Krzywinska’s argument condenses a still-contentious issue into paradoxically unreal and actual sex scenes in specific texts, with the terminology now thoroughly and happily muddied.

Alongside Geoff King, a handful of the contributors come from Brunel University’s Film and Television Studies, and although King states that no particular thread has been pursued by the authors, the reader will probably find one regardless, likely pointing to discussions in Brunel’s hallways. The conflation of September 11, reality television and film is convincing precisely because the reader is left to pursue the relationships. While the volume is modest in presentation, it possesses some standout essays of original conceit and critical energy. To which a cynic opening its pages can only say “Godbless, Godbless, Godbless”.

The Spectacle of the Real: From Hollywood to “Reality” TV and Beyond, edited by Geoff King, Intellect Books, Bristol, 2005.