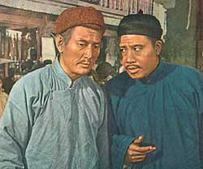 The Lin Family Shop was a production of the Mainland Chinese film industry under the Maoist regime, which had long subjected the content and style of films to political rather than artistic imperatives. The source of the film was a 1932 novel by Mao Dun (the Minister of Culture in Mao’s government); the screenplay was written by Xia Yan (who headed the Film Bureau in the ministry). Both men were well known leftist writers in the 1930s, and the style and content of The Lin Family Shop is redolent of the social melodramas of the 1930s – the so-called “progressive” films produced between 1932 and 1937 in Shanghai.

The story itself is set in 1931, against the backdrop of a nation-wide anti-Japanese boycott following Japan’s invasion of Manchuria. It is the season leading to the Chinese New Year, a time when debts are paid and money is on everybody’s minds. Mr. Lin (Xie Tian), a local shopkeeper in a small town in Zhejiang Province, comes under pressure to pay a bribe to the local Kuomintang official so that he can continue to sell Japanese goods by concealing them under Chinese brand names. In order to raise funds to pay the bribe and to settle his own debts, Mr. Lin undercuts his fellow business competitors and misuses the funds entrusted to him by small-time investors seeking to earn interest on their meagre savings. The theme of the movie is that of the corrupting influence of money on the small businessmen in China at the point in its history when the country was “groaning under the triple oppression of imperialism, feudalism and comprador-capitalism”, to quote the legend at the beginning of the film (further underscored by a voiceover narration). The story depicted a society where “the big fish eats the small fish, and the small fish eats the shrimps”, as the legend puts it. Under the Maoist regime, the movie was supposed to impart the message that the Communist Party had redeemed China from the triple oppression and that the country would no longer experience the same kind of endemic economic crisis that hobbled the old society.

The evocation of the 1930s in The Lin Family Shop is instructive, because it recalls the whole aura of the Chinese film tradition which Paul Pickowicz describes as a “marriage between classic melodrama and elementary Marxism”, exemplified by films such as Sun Yu’s The Little Toys (1933), Wu Yonggang’s The Goddess (1934), Ying Yunwei’s Plunder of Peach and Plum (1934) and Yuan Muzhi’s Street Angel (1937) (1). This begs the question of whether, under the Maoist regime, Chinese cinema could have advanced to a more mature stage of Marxism. The basis of the drama in The Lin Family Shop is that of a class conflict between the small and big businessmen, a conflict that portrayed unambiguously the moral decay of capitalism to an audience who in 1959 would have already experienced ten years of communist rule. The form and style of the film is certainly much more sophisticated than that of the 1930s melodramas. Shui Hua, the director of the film, shows a special delight in the 1930s period background. In my view, The Lin Family Shop is a triumph of mise-en-scène and production design: I would point specifically to the way that director Shui Hua (in league with his production designer Chi Ning) tends to use medium shots and medium long shots, together with camera movements on the crane, to emphasise scenes of cluttered description –the Chinese New Year throng, the goods and products of the shops, the cups and tables surrounded by people in the teahouses, and so on. There’s a breathless quality in the mise-en-scène – a sheer pleasure in cinema that overcomes the viewer – and to this extent, the film is quite admirable.

However, the clutter of the mise-en-scène in a sense overrides the ideological message, and there was indeed a debate about whether the film was pro or anti-capitalist (more on that in a little while). Ironically, the ideological laxity of the film, if it may be put that way, can be said to be an outcome of the requirements of melodramatic representation. Pickowicz refers to the melodrama as “a genre well suited to the task of popularising and dramatising basic Marxist ideas”, and outlines the traits of the melodramatic mode as “rhetorical excess, grossly exaggerated representations, and extreme moral bipolarity.” (2) Consistent with the melodramatic mode, the capitalists and the big businessmen are portrayed with stereotypical “bad guy” qualities. There is no attempt at psychological subtlety in delineating the bad guys, or come to that, the good guys either. But does the melodramatic mode imply that The Lin Family Shop is a Marxist film made according to the ideological dictates of the Maoist regime? At the most, I think one can call The Lin Family Shop a melodrama with political messages, but hardly a Marxist film. And to circumscribe the film within the notion of ideological cinema, by which we mean propagandistic, dogmatic, and a work of shallow artistry, hardly does it justice.

So how should The Lin Family Shop be assessed finally? I think we might look at it purely on a formal level, firstly, as an exemplary work in the aesthetic tradition of the Chinese national cinema. The film calls attention to itself as a stylistic work, not as an ideological work of Communism or a doctrinaire work of socialism. Secondly, we might locate it as a work following and continuing the tradition of the social melodrama of the 1930s that had somehow transcended the limitations imposed upon it by the Maoist regime and turned a drama about class conflict into one about China in crisis and its existence as a nation state. As critics such as Zhang Yingjin have pointed out, addressing the theme of “existential crisis” is the kind of nationalism that was articulated more explicitly by the left-wing cinema in the 1930s – but the existential crisis addressed in The Lin Family Shop is the crisis of the failure of capitalism in China (3). Some of the most striking scenes in the film come in the portrayals of the ordinary peasants in Mr. Lin’s shop desperate to redeem the interest on their savings – and Mr. Lin’s equally desperate bid to sell them goods. These scenes, and the film in general, appear to entertain the notion that if capitalism had not failed, China would not have become communist (the supreme irony is that China today is one of the world’s most aggressive capitalist economies). That such a notion was behind The Lin Family Shop is demonstrated in the attacks on the film in the prelude to the Cultural Revolution (as I have alluded to above). Some brief passages of this criticism include: “It showed too much sympathy for capitalists”; “the film is a pail of dirty water emptied into that canal, rather than a spark to start a prairie fire.” Much of this criticism was centred on Xia Yan:

He cannot feel the oppression suffered by the people, and this shows clearly the class tendency of Comrade Xia Yan. Like many other cultural comrades, he was born in a capitalist intellectual family… and has strongly clung to his capitalist viewpoint. Such people have the kingdom of capitalism deeply embedded in their hearts, and whenever they get a chance they will reveal their capitalist ideas and leanings. (4)

The Lin Family Shop must ultimately be located within the parameters of Chinese national cinema rather than the narrower concept of the cinema of the Maoist regime. Seen in this light, the film harks back to the progressive social melodrama tradition that marked the 1930s. Its evocation of the social melodrama of existential crisis stresses its continuity with a film such as The Goddess, and its aesthetic sensibility (its triumph of mise-en-scène that I have mentioned earlier) links it to the stylistic achievements of Fei Mu’s Spring in a Small City (1948). One could also link it to the works of the future – to the films of Fifth Generation directors like Zhang Yimou (Raise the Red Lantern, 1991) and Tian Zhuangzhuang (in his recent remake of Springtime in a Small Town, 2002). All these varied films come under the banner of the Chinese national cinema – an idea that transcends the divisions of time, genre, and politics and confers an infinitely richer qualification upon a work such as The Lin Family Shop.