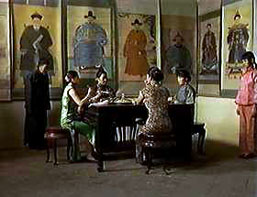 Confucianism formed the basis of Chinese culture when the Han Emperor Wu, who ruled China from 140 to 87 B.C., instituted it as state ideology and orthodoxy (2). Zhang Yimou’s fourth film, Raise the Red Lantern, is the last of a trilogy (Red Sorghum [1987] and Judou [1990] are earlier instalments) that is deeply critical of Confucianism and Chinese culture. The film was banned in its home country and never made it to the silver screen in China; after the ban was lifted, it was “marginalised” and only shown on television.

According to Sheldon Lu, the Fifth Generation filmmakers (such as Chen Kaige, Tian Zhuangzhuang and Zhang) were part of a nationwide intellectual movement that swept China in the mid- and late 1980s, and embarked on a cultural critique of the deep structure of the Chinese nation: “their (the Fifth Generation filmmakers’) frequent deployment of long takes, long shots, and deep focus, are anguished, self-reflexive, slow-paced, scathing critiques of entrenched patterns of traditional Chinese culture” (3). Raise the Red Lantern portrays life in a stifling and constrictive sanheyuan or Chinese courtyard house (which usually belong to families established for many generations). The family institution is central to Chinese culture, as according to Confucian philosophy, it is believed that only when families are well run, will the state also be well governed. The sanheyuan was developed in China based on Confucian ideology and epitomises classical Chinese architecture – the way in which space is outlined and occupied in these houses is an expression of the complex social rules that are supposed to embody domestic utopia. Sanheyuan(s) were self-contained and everything that one needed could be found within these courtyard houses; doctors and even entertainment were brought into the compound when required; at auspicious occasions, Chinese operas would be staged to entertain the household and guests. The Forbidden City in Beijing was the ultimate sanheyuan.

Women would never venture beyond the enclosing walls of the sanheyuan, as it is supposed to protect them from the hardships of the outside world. Within these high walls, the writing of poetry and the study of Confucian philosophy were supposed to be pursued in celestial peace (4). But this is certainly not the idyllic setting that we find in Raise the Red Lantern, where infighting is rife and the web of deceit spun by the wives and maids is impenetrable! One of the lasting images that we are introduced to at the beginning of the film is when Songlian enters the sanheyuan in her school uniform. She is symmetrically framed by a huge Chinese plaque behind her, inscribed with archaic Chinese characters gilded in gold – the image is a presentiment of how the rules of the Chen household will eventually swallow her up. Songlian is immediately engaged in the intrigues of the house; when a maid disrespectfully acknowledges her as the “new” Fourth Mistress, our protagonist quickly foils the maid’s disrespect by responding, “yes, and you can bring my luggage in!”

Joann Lee analyses the film through what she calls the “Confucian/feminist matrix” (5). This “matrix” is indeed complex in Raise the Red Lantern. Ideally, the sanheyuan is supposed to protect the women from the hardships of the outside world, but ironically in Raise the Red Lantern the hardships found within its high walls are perhaps even more virulent! Quite the contrary to the pursuit of poetry and learning in the utopian celestial peace supposedly offered by the sanctuary of the sanheyuan, we witness the events of what is essentially a “domestic bordello” – where the wives ruthlessly fight for the lighting of red lanterns in their quarters, so that the master will spend the night with them, and they will subsequently receive the privilege of exotic foot massages. Throughout the film, Zhang demonstrates the “confusion ethics” that run amok within a sanheyuan!

The Confucian/feminist “matrix” employed by Zhang poignantly highlights the ineffectualness and oppressiveness of the Chinese Confucian system. Confucianism fosters a patriarchal society through its emphasis on rigid class and gender lines, customs, ancestral worship and heavy priority placed on having a male heir to continue the family name (6). Daughters are not valued, as seen in Raise the Red Lantern, but treated as objects. They are not free to make major choices in life such as choosing their own life partner in a marriage; instead, marriages are often dictated by economic gains. Women have no identity apart from men, they are there simply to satisfy the male sexual appetite and provide a male heir, as we see in Raise the Red Lantern. Chinese women are imbibed to obey their fathers as children; obey their husbands when married; and follow their eldest sons when widowed. Therefore, when women gain their identity and stations in life from this oppressive structure, they in turn, gain satisfaction from enforcing these customs and rules on less powerful women (7). This is artfully portrayed in Raise the Red Lantern – having received more education compared to the other wives in the Chen household, we expect Songlian to be above the deceit of the wives and maids, but she becomes entrapped in household intrigues and is later instrumental in her maid’s death and the execution of the Third Mistress.

Fetishes are replete in Raise the Red Lantern. The foot massage stands out not only thematically and psychologically, but also culturally. Thematically, the foot massage is a symbol of power – it is a privilege enjoyed by the woman whom the master chooses to spend the night with. The enticing and haunting beat of tiny pebbles echoes throughout the house each evening as the woman whose soles are being beaten luxuriates in the sensation. She knows the master favours hers and basks in the sense of power and attention. As Second Mistress tells Songlian, “don’t underestimate the foot massage; if you get one everyday, you will be ruling the household!” (8).

The foot massage is a fetish for both the patriarch and his wives (this fetish acting as a substitute for a woman’s “lack” (9)). The woman is paradoxically the mechanism by which the man achieves phallic wholeness, from and through which he derives pleasure; yet at the same time renouncing it. Fetishism is commonly viewed as being derived from the castration complex, in which the fear of castration is repressed and displaced by fixating on some object; and in the case of Raise the Red Lantern, the foot massage is one form of fetish. The wives, of course, are another form of fetish – the more wives the master has, the greater the affirmation of his maleness. This is perhaps why Third Mistress’ infidelity poses such a threat to this patriarchal system – by having a lover, she assumes the “phallic” power that men enjoy. She is eventually executed, an ultimate form of castration (10). Confucianism dictates that every person knows his or her place in society, and that upholding family tradition takes precedence over the individual’s needs. In previous generations within the Chen household it was hinted that two women were murdered for cheating on their husbands. Songlian’s flute can also be regarded as a fetish (aside from its phallic shape). The flute in Chinese culture symbolises erudition and only men played the flute. The flute signifies Songlian’s privileged education that is denied the film’s other female characters. She has unwittingly inherited the flute from her father, but it is quickly wrested from her, emasculating her, reducing her to the level of the less educated wives. In Songlian’s own words, the level of animals who senselessly plot against each other!

Historically and culturally in China, the metonymic relationship between a woman’s feet and sexuality is well known. It was a Chinese myth that the smaller a woman’s feet, the smaller her vagina – therefore, the better for the man. Between the 10th and 20th centuries, foot binding was part of the class dynamic. Only “privileged” girls had their feet bound, as it was perceived that the rich could keep their women idle – girls’ toes were turned under the soles of their feet, hence breaking them, and their flesh rotted into blood-soaked bandages (11). Foot binding also ensured that women would take smaller, daintier steps, attaining a more graceful gait. Zhang ingeniously reinscribes and critiques the Chinese tradition of foot binding by replacing it with the foot massage. The foot massages are seen less as a reward and privilege for women – for it serves the interests of the master or patriarch – than as a kind of foreplay to “prepare” the vagina as a receptacle for the penis. In the master’s words, to help her “better serve” him (12)!

The Confucian/feminist “matrix” is effectively employed by Zhang to illustrate the oppression of the Chinese people, who are choked by their ineffectual “confusion ethics”. The film highlights that Chinese traditions and rituals are in dire need of re-evaluation; there is no investigation of knowledge or cultivation of characters advocated by Confucius – merely an oppressive system of rules. The film focuses on a family, but its fate also extends to a country and civilisation gone awry. The women in Raise the Red Lantern represent the Chinese people who are oppressed by an authoritarian government that allows no freedom of expression – surely the film makes obvious but coded reference to the Tiananmen Square Massacre that occurred in 1989. The many students murdered at the square are represented by the cruel execution of Third Mistress. It is no wonder that Raise the Red Lantern was banned in China when it was released in 1991 and was never screened in cinemas. Ironically, lanterns provide illumination, and therefore, are supposed to enlighten, as does Confucianism. Instead, they represent symbols of oppression in the film; used ritualistically to augment a barbaric system of class and gender exploitation that defines Zhang’s view of Confucianism (13).