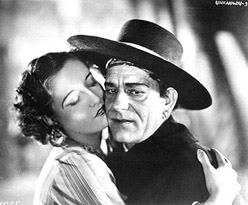 WARNING: This article divulges most of the film’s major plot elements.

As in any art form, the history of cinema contains many works that are, for whatever reason, overlooked and underrated. Tod Browning’s The Unknown (1927) is definitely one of these works, and it is, without hesitation, a modern masterpiece for the current century. Browning is best remembered for the milestone Dracula (1931), the first of the Universal horror films (for which Lon Chaney was originally offered the lead role but he deferred and then died) and Freaks (1932), the director’s confronting rebuke for the representation of malformation by Hollywood, filmmaking, and the other arts. Yet prior to both he made a remarkable series of films with the extraordinary, ‘Man of a Thousand Faces’, Lon Chaney (1), of which The Unknown is the pinnacle. This delirious, outrageous l’amour fou – a chilling, genuinely disturbing and haunting melodrama – is what cinema should be all about: a suspension of belief in the face of a story that defies all logic yet rings true to the deeper human emotions.

Alonzo (Chaney) is a three-thumbed criminal eluding Spanish police detection by hiding in a gypsy circus as an armless knife thrower. His female assistant, Nanon (Joan Crawford), lives in fear of the embrace of men (Is this because of abuse from her father, the brutal, authoritarian circus owner?). Alonzo kills Nanon’s father when the father accidentally sees Alonzo’s arms. During the murder, Nanon notices the murderer’s double thumb. The weight lifter (Norman Kerry), unaware of Nanon’s fear, pursues her with the knowing encouragement of Alonzo. These advances push Nanon into Alonzo’s ‘arms’ and Alonzo’s dwarf side-kick (John George, one of a number of dwarves Browning featured throughout his career) warns Alonzo not to allow Nanon to touch him again otherwise she will realise that he is not an amputee and subsequently discover his extra thumb. Driven insane with love, Alonzo has his arms surgically removed only to discover that during his long convalescence Nanon has fallen in love with the weight lifter and loves his embrace. The strongman now has a new circus act. He pits his strength against two horses that can rip his arms from their sockets if something were to go wrong. Alonzo, driven further over the edge plans a fitting vengeance…

Browning’s great strengths as a director lay in his ability to draw memorable performances from his cast and to create a believable world despite the mounting absurdities of the plot and the world in which his characters lived. He has the audience believe in the fantastic possibilities of the cinema. Bela Lugosi gave his definitive and arguably only real performance in Browning’s Dracula. When the simultaneously filmed Spanish language version of Dracula was rediscovered ten years ago, a number of viewers, in their excitement, considered this Latino version, directed by George Melford the better film, for its libidinous content. However, a comparison between the two is instructive since it reveals Browning’s skills as a director. His film has Lugosi’s memorable performance while the Spanish version features uniformly inept performances by its cast, lead by the excruciating Carlos Villarias as Count Dracula. Browning has a sympathy for his material, and the film, although encumbered by a static expressionism, is replete with remarkable cinematic vignettes that make it unforgettable. Consider Lugosi’s “creatures of the night” speech, missing from the Spanish version, or the striking imagery of the ‘one hundred and twenty five step’ staircase where the climax of the film occurs. This was further refined in the minimalist decor of Universal’s Frankenstein films.

It is these skills that also make The Unknown great. The film relies on a finely balanced performance from Chaney to succeed. Chaney had been mesmerised by clowns from an early age, fascinated by the potential duality of their personae. It is this that he brought to the fore in his acting, especially in The Unknown. Alonso is a hate-filled, fear-inspiring creature who has an all-consuming, obsessive passion for his assistant. Chaney is required to display a credible balance of psychosis towards the world and believable emotion for Nanon. Frequently he is required to do this within the same scene without detracting from either aspect of his performance. For the amputation scene to work, one needs to feel compassion for Alonso, to understand his motivation, and once the scene is over, the horror of what Alonso has done only has its full impact if one sympathises with the character, even if paradoxically, he is a loathsome thug, unworthy of our compassion. The scene when Nanon asks Alonzo if he is thinner, before her disclosure of her love for the strongman, is tinged with perversity, dread, misunderstanding and ultimately extreme pain.

The Unknown is a truly horrifying film that takes us into the darkest recesses of the human psyche. All of the characters are simple beings who are driven by their emotions: the circus owner bullies, the hunky strongman loves, the attractive Nanon lives in fear, and Alonso oscillates between obsession and hatred.

Browning, who wrote the original story, from which his regular collaborator Waldemar Young fashioned the script (2), displays an originality in storytelling that remains fresh even after 100 years of cinema clichés. He builds the various narrative strands into a taut work that resonates from the impact of its elements creating an emotionally powerful experience. The use of the ‘arm’ motive is thoroughly integrated, dealing subtly with its psychology, and skirting with its many paradoxes – a man with eleven fingers hides as an armless freak, Nanon only achieves redemption once she falls for the ‘strong-armed’ man and Alonzo only realises his love is futile once he has lost his arms.

Browning came to Hollywood after working in the circus for fifteen years. His knowledge of this milieu enriched many of his films, including Freaks, The Unholy Three (1925), The Show (1928), and The Unknown. While the circus background is relatively cursory in The Unknown, many small details, such as the play of shadows on the carnival canvas when the strongman first attempts to embrace Nanon, bring an additional texture to the image. Further details, such as the gypsy funeral ritual, add depth to the portrayal of circus life. Browning’s non-judgemental view of the gypsy lifestyle runs counter to the stereotypical depiction of ethnic minorities by Hollywood, especially a group as misunderstood as the gypsies. Browning’s interest in outsiders and the rejected was no doubt nurtured by his time in the circus, and he well understands the audience’s attraction to this image of the dark underbelly of carnival life, hidden by the masquerade of gaiety. His heroes were not the attractive and glamorous found in most movies, but those misbegotten beings normally hidden from our sight and treated in a condescending manner.