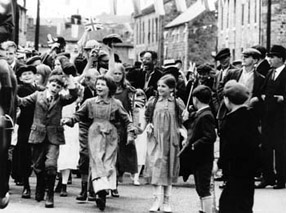 Originally televised on BBC 1 during September-October 1975 and repeated during April 1978, a year before the election of Margaret Thatcher’s right-wing Conservative Party, Days of Hope still remains an enduring legacy of that lost world of radical BBC television drama that no longer exists in today’s “dumbed-down” Corporation. Stylistically, it forms a link between the working-class naturalist techniques employed by Loach and his collaborators in television dramas such as Up the Junction (1965), Cathy Come Home (1966), and The Big Flame (1969) and later adventurous cinematic techniques seen in Hidden Agenda (1990), Land and Freedom (1995), and Carla’s Song (1996), uniting narrative form and political discourse. Although criticised at the time by Screen theorists slavishly adhering to the now defunct ideological/theoretical agenda of Colin McCabe’s “classical realist text”, Days of Hope actually adheres more to the conflicting discursive techniques associated with later more flexible theories of realist narrative, as well as providing an investigative arena to interrogate past, present, and future British politics. While Jacob Leigh’s (1) study of this four-part mini-series covering British working class history from 1916 to the 1926 General Strike succinctly notes the associations of the political past with the changing landscape of the mid-1970s, the series also intuitively foreshadows a later era when Tony Blair’s neo-conservative New Labour government has achieved a far more devastating betrayal of working-class hopes than Old Labour politicians and trade union officials did in the 1920s.

Produced by Tony Garnett and written by socialist Jim Allen, Days of Hope was one of the landmarks of British television drama. It is not surprising that it has never been repeated since 1978, nor made available by the BBC on DVD/VHS formats while complete series of Are you Being Served? and upper-class costume dramas are. The series was political dynamite both then and now even though Allen engaged in meticulous historical research. After the first episode, a storm of protest erupted over the depiction of conscientious objectors being tied up to stakes erected outside World War I trenches in full view of enemy fire. However, a letter by an ex-serviceman subsequently appeared in The Times (then, thankfully, free from Rupert Murdoch’s control!) not only supporting Allen’s facts but also supplying an illustration of one of these stakes. Although Days of Hope employed the family narrative structure that also characterised other contemporary series such as Roots, it politicised its content and operated in a much more honest manner than the covert conservatism of other series such as Upstairs, Downstairs and Edward the Seventh.

“Episode One: 1916” introduces viewers to the four main family protagonists. Pacifist Christian socialist Philip Hargreaves (Nikolas Simmonds) has married into a Yorkshire farming family. While his wife Sarah (Pam Brighton) supports him, other members of the Matthews family are either hostile or apathetic. Despite being warned about the realities of war by a soldier on leave, Ben Matthews (Paul Copley) enlists while Philip is arrested as a conscientious objector and condemned to death on the front-line after other coercive measures (mentioned above) fail. Only a last minute reprieve saves him from execution. The episode concludes with Ben in Ireland witnessing national resilience against the British invaders.

“Episode Two: 1921” begins with Ben’s desertion from the Army. He joins the Durham Miners in their resistance against oppressive measures introduced by a Government fearing another Bolshevik Revolution. He befriends striking miner Joel Barrett (Gary Roberts) and experiences the lying promises of a mine owner. One scene where the gentlemanly owner offers some miners refreshments is ironically modelled on 1960s Labour Prime-Minister Harold Wilsons “beer and sandwiches” invitations to trade unionists at Number 10, Downing Street. The episode concludes with the betrayal of an agreement and the arrest of Ben and other miners at dawn.

“Episode Three: 1924” begins with Ben’s imminent release from prison. He has now become radicalised and joins the Communist Party along with Joel. Ben stays at the London home of Philip who is now a Labour M.P. During this episode the Durham miners meet a Soviet delegation at the House of Commons and express reservations over the change from “war communism” to the New Economic Policy. The episode concludes with Philip’s interview with Labour Minister Josiah Wedgewood (John Philips) concerning charges that Lloyd George’s strikebreaking plans were secretly passed on to the Labour Party now in power. Although Wedgewood dismisses the charge, a concluding caption shows that this information was indeed true. The plans were used by Stanley Baldwin’s Conservative Government to break the 1926 General Strike.

The final episode, “General Strike”, is the longest (135 minutes) of the series. It presents a damning indictment of the betrayal of the miners by treacherous trade union leaders at a time when the Strike could have brought down the Government and led to a radical change in British society following a Trotskyite rather than Stalinist model. Scrupulously researched and historically accurate, despite contemporary charges of bias, Allen and Loach’s series used discursive models of political discussion adopted later in Land of Freedom to avoid the dangerously monological approach of most political dramas such as the pro-Israel US mini-series Holocaust and War and Remembrance. It also illustrates the political and personal tensions within the Hargreaves and Matthews families. While Ben and Sarah condemn the Labour Party and trade union leadership’s betrayal of the working-class, Philip pompously follows a right-wing revisionist line. This line would later characterise future Labour politicians who left their Party to found the Social Democrats in the 1980s, to say nothing of Thatcher’s real heir, Tony Blair. This episode also reveals that the BBC under John Reith (the founding director general) was also a tool of government.

Days of Hope is neither family melodrama not didactic agit-prop. It creatively merges the personal and the political in the best traditions of Loach’s television and cinema work. It also represents the lost opportunity of British television drama, brutally crushed by Thatcher and Blair in the same manner that McCarthyism destroyed oppositional movements in post-war American cinema.