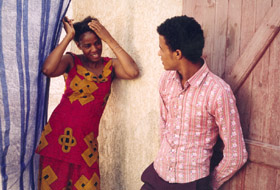 Although the journey through Burkina Faso’s savannah is indeed scenic, one would perhaps not expect soon to hit upon the film centre of Africa. But when you arrive in the capital and its grand Parisian-style avenues lead you to the only square in the world dedicated to filmmakers, you begin to grasp the importance of film to a country constantly singled out as being one of the world’s poorest. The modest monument at the Place des Cinéastes consists of a tower of film rolls around which Ouagadougou’s unhurried traffic circulates as in a gigantic laterna magica. And the whole city does indeed seem to pivot around its biennale film festival, the ‘Fespaco.’ For no less than 34 years the Burkinabe capital has been home to this pan-African film festival, which in the 1990s grew to become the largest recurring cultural event in Africa with more than 5,000 official participants and an estimated turnover of more than 100 million euros.

This constancy is a remarkable achievement in the difficult logistical and, sometimes, political circumstances. Despite repeated complaints about films that never arrive and programmes not printed on time, this 18th edition of Fespaco ran very smoothly overall. The impressive schedule of six days of showings from 8am until midnight featured competitions for feature films, short films, and televised series, in addition to an extensive programme outside competition that, in accordance with this year’s chosen theme, often focused on African actors, as with Rahamatou Keita’s homage to Nigerian actress Zalika Souley. The main competition included several remarkable feature films like Assane Kouyaté’s Kabala (2002) from Mali, Mahamat Saleh Haroun’s Abouna (2002) from Chad, Jason Xenopoulos’ Promised Land (2002) from South Africa, and Abderrahmane Sissako’s Heremakono/Waiting For Happiness (2002) from Mauritania, which is described below and which deservingly went on to win the festival’s greatest honour, the Yennenga Prize. With a large number of debut films, like Mansour Sora Wade’s Le Prix du pardon (2001) and Alain Gomis’ L’Afrance (2001) from Senegal, and Khaled Ghorbal’s Fatma (2002) from Tunisia, the average age of competing film directors was the lowest ever and the Fespaco was yet again an evident success in the eyes of both participants and organisers.

Yet, despite this repeated success and its well-established position as Africa’s leading film event, the Fespaco festival faces serious challenges. These challenges, detectable first of all through a number of striking reductions and absences, may not yet constitute a genuine crisis, but certainly call for certain transformations in the festival’s ability to adapt to the current African cinematographic landscape. Very noticeably, the number of films in this year’s main competition went down from 20 to 16. The festival’s chief representative Baba Hama explains this as simply a result of decreased production of African films in general. And, admittedly, the African film industry has always experienced immense problems regarding funding and distribution of the continent’s own films in a market generally dominated by cheap, imported films featuring fist fights and melodrama. 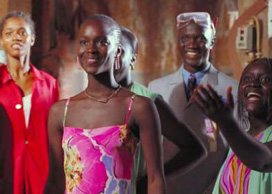 Should one conclude with Fespaco that African film finds it increasingly difficult to meet these challenges? Not necessarily. The directors’ low average age should be seen in the light of various absences amongst the continent’s most experienced people. Although veterans like Cheikh Doukouré (Guinea) and Flora Gomez (Guinea-Bissau) were present in the competition – the latter with the wonderfully eccentric musical Nha Fala (2002) – noticeable absentees were Ousmane Sembène (Senegal), last festival’s winner Nabil Ayouch (Morocco), and Souleymane Cissé (Mali), the only director ever to have twice received Fespaco’s highest honour (for Baara [1978] and Finyè [1982]). And several experienced directors such as Cheikh Oumar Sissoko (Mali), Merzak Allouache (Algeria), and Idrissa Ouédraogo (Burkina Faso) chose to participate outside competition – in the case of the latter, however, mostly due to his responsibility on the prize jury and perhaps also because his mythico-historical film La colère des dieux (2003) which opened the festival, was embarrassing compared to his previous works.

It is moreover noticeable that amongst those 16 films in competition only six were not from francophone West Africa. Significantly, there were no representatives from some of Africa’s most efficient film-producing countries, such as Egypt and Anglophone countries Ghana and Nigeria, which have experienced a remarkable success precisely in the notoriously difficult domestic markets, mainly due to the introduction of low-cost video distribution. When it comes to the Maghreb-countries, there were indeed four (somewhat disappointing) films represented in the main competition, but even this number seems astonishingly small when taking into consideration the consistent artistic strength of, notably, Morocco, where special taxes on television advertising have boosted the domestic film industry.

If, then, fewer films competed in Ouagadougou, the reason is not likely simply to be Africa’s deepening difficulty meeting the perpetual challenges of financing and distributing its own films. Rather, Fespaco’s declared ambition to be the principal showcase of ‘Pan-African’ film is the challenge that has become difficult to meet. That, however, is not necessarily a bad sign for African film in general. First of all, many directors with successful domestic markets may not need the attention of an international film festival. Second, the increasing cinematographic strength of Africa’s Arab and English-speaking countries is likely to see the rise and institutionalisation of other film festivals to complement an increasingly francophone Fespaco. This will further emphasise the growing regionalisation of a continent whose deceptive aura of cultural homogeny will dissipate with time. African film simply lives through a deep transition in the continent’s politico-cultural landscape, which will necessitate a transformation of Fespaco itself and its increasingly thin claim to panafricanism.

With the exception, perhaps, of deeply cinephile Burkina Faso, the francophone Sub-Saharan countries are precisely those that face the severest difficulties in securing domestic funds and distribution. Consequently, the film industry in francophone West Africa is increasingly turning to European organisations and companies for production and distribution, and the cultivation of this intercontinental network has thus become a vital aspect of the Fespaco. No less than 11 films in competition at this year’s festival were financed by European sources, often in the form of well-established cultural ties with the former colonial power France, through such institutions as the European Commission and the state-owned, Franco-German channel ARTE. While the resulting budget boost is not only welcome but necessary for supporting the immense potential of the most talented African filmmakers, the Fespaco festival will soon stand in danger of being reduced to a mere showcase for the ‘diversity’ of French cultural imperialism, funded by Paris and Brussels. “We make film for Europe,” as Idrissa Ouédraogo, the Burkinabe film director heading this year’s jury, already openly states it.

This tendency towards European dependency has begun influencing the very themes of the competing films. While works during Fespaco’s first two decades deliberately served to distance themselves ideologically from Europe, as in Med Hondo’s 1985-laureate Sarraounia (1985) and the socio-realist works by double-laureate Souleymane Cissé, the current films have grown increasingly urban and cosmopolitan and are now often filmed partially, if not entirely, in Europe. Examples amongst this year’s 16 competitors were, especially, Paris selon Moussa (Cheik Doukouré, 2003) from Guinea, Moi et mon Blanc (S. Pierre Yaméogo, 2002) from Burkina Faso, and L’Afrance – all filmed, with varying success, in Paris. And even films shot entirely in Africa often deal with the preparation for a departure for Europe, including the winning Heremakono and Mohamed Ismaïl’s Et Après (2002) from Morocco. This trend could in the long run jeopardise Fespaco’s declared ambition of honouring “African cultural identity and Africa’s social realities,” or as Algerian film director Merzak Allouache expresses it: “Are we losing a sense of our own reality?” What is more, many films now appear or compete in Europe long before entering the competition in Ouagadougou. L’Afrance and Fatma, for instance, appeared in Paris last year and Fespaco’s three finest francophone works had all already been presented at French festivals: Abouna at the Quinzaine des Réalisateurs, Kabala at the Semaine de la Critique and Heremakono at Cannes in the official Un Certain Regard selection. 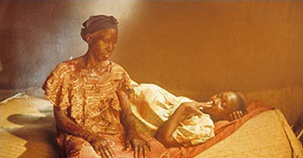 Yet, despite their heavy reliance on European production and distribution, these three films were impressively successful in representing the African reality in a stringent and proud, poetic light. Sissako’s Heremakono, the winning film at Fespaco 2003, masterfully employs the Mauritanian village Nouadhibou – uniquely suspended between sea and sand and between Maghreb and Sub-Saharan ethnicities – as both a cultural bridge and a mental point of departure. The young man Abdallah (Mohamed Mahmoud Ould Mohamed) arrives in Nouadhibou while waiting to continue to an unknown destination in Europe. Unable to speak the local language, Hassanya, he spends his time thinking and observing, while a young boy Khatra (Khatra Ould), who wants to become an electrician, teaches him some basic vocabulary. The film is deliberately slow-paced and introspective; its richness stems from its convincing character creation and intense cinematographic work. In a constant play on light – electric or natural – as it is filtered through windows, doors, cables and cloth, the film highlights the intangible shades of human optimism in a universe of cultural screens and suspended expectations.

Other films in competition, such as Fatma, Hassan Benjelloun’s Jugement d’une femme (2002) from Morocco, and Moussa Sène Absa’s Madame Brouette (2002) from Senegal, confronted far more directly the social reality of women, calling for the resolve of the African woman in the face of male-dominated moral codes. The festival’s commitment to the social realities of its continent also expressed itself in an important series of films on AIDS in Africa, including representatives from the South African project STEPS For The Future and the reassuring and deliberately naïve Vivre positivement (Fanta Régina Nacro, 2002) from Burkina Faso. In addition to the official feature competition, the festival included a broad programme of films from the African diaspora, as well as a short film programme dominated by documentarians, on top of a diverse representation of televised products.

What gives the festival in Ouagadougou its unique character, however, is the impression that a whole city partakes in the event, whether through the restricted festival screenings, the national television channel, or the immense public screenings at the Place de la Révolution and the Municipal Stadium. Besides being the largest cinematographic event in Africa, the festival is thus also a welcome confirmation of the popular if not universal appeal of cinema.