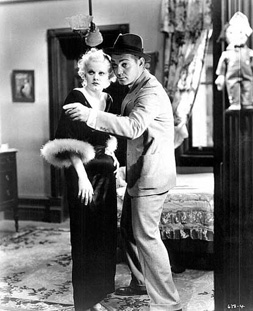 Made in 1933, Hold Your Man is a fascinating mix of racy pre-Code cynicism and post-Code sentimentality and piety. Split right down the middle of its running time, the film’s first part resembles less a glossy MGM film and more a proletarian or underworld Warner Bros. product of the time, while the second half looks forward to the overt moralising tendencies apparent in MGM’s films after mid-1934, when studio head Louis B. Mayer insisted that his studio give audiences reassuring Christian moral and spiritual uplift. In retrospect, Hold Your Man embodies Depression-era Hollywood’s contradictory impulses to obey pressures mounting from organised groups like the Catholic National Legion of Decency, as well as fulfil popular demand for more sexy and gritty fare in order to maintain corporate profitability in a depressed market. Hold Your Man had its cake and ate it too. The film was a huge hit, costing $262,949 to make, it earnt more than a million dollars at the box-office (1).

Designed as a vehicle to re-team Jean Harlow and Clark Gable after the equally successful Red Dust (1932), Hold Your Man effectively exploited the personas of its two stars. Harlow is a working-class wise-cracking dame whose hard shell conceals a heart of mush and a yearning for bourgeois domesticity and conventional married family life. Gable, after a rapid ascent to become MGM’s most important male star in less than three years, plays the naughty, lovable scam artist redeemed by Harlow’s fidelity. By 1933, Gable had outgrown his sadistic supporting gangster roles (such as Ace Wilfong in Clarence Brown’s A Free Soul [1931]) and was positioned by his studio as a roguishly charming leading man. Gable and Harlow went on to make three more films together before her untimely death in 1937 at the age of 26. They are a great screen team, and they trade banter with superb timing. In large measure, Red Dust established the template out of which Hold Your Man was stamped. A sexually liberated woman is mastered by her own submerged desires to conform to a more “traditional” role, and her emergence into social convention is rewarded with the love of a tough man whose own growing unease with his asocial independence is alleviated by an equally asocial and independent woman. Depression audiences loved these romantic characters for their hard exteriors and soft interiors (over at Warner Bros. James Cagney and Joan Blondell developed the same co-starring relationship in their four pre-Code films together). These new romantic partnerships reflected the audience’s own sense of themselves as hard-bitten survivors of economic and political vicissitude, who nevertheless refused to relinquish their quintessential American optimism and faith in the individual to triumph over adversity.

Hold Your Man‘s first half zips along thanks to Anita Loos’ irreverent scripting, which pits man and woman on equal terms. Loos was the major force behind Harlow’s 1932 sensation Red-Headed Woman, still considered one of the most audacious and amoral pre-Code films ever made. Loos’ main claim to fame was her comic novel Gentlemen Prefer Blondes (1925), which enshrined the “flapper”, that materialistic hedonistic young woman, subsequently transmuted into the down-trodden working-girl of the early 1930s. What the two female prototypes had in common was an unprecedented degree of sexual agency, using their wiles and physical attractions to rise above their stations. Harlow’s Loos heroines (Lil in Red-Headed Woman and Ruby in Hold Your Man) are nobody’s fool and have “been around”, as Ruby cryptically expresses it. But while Lil is unredeemed by the end of the former film, having both a rich “sugar-daddy” and a French chauffeur to satisfy her material and sexual wants, Hold Your Man succumbs to a highly moralistic imperative that takes over at the half-way point, when the characters get mixed-up in an accidental homicide and the light, comedic tone of the first half is superseded by some extremely sentimental melodrama. Indeed, Hold Your Man was the first film Harlow made that beatified her as a mother.

The scenes set in the women’s reformatory are as full of female slang-matches and rough physical conflict as other “bad girl” films made in 1932-3 featuring incarcerated women (John Cromwell’s Ann Vickers; Mervyn LeRoy’s Three on a Match; William Keighley and Howard Bretherton’s Ladies They Talk About). Yet, Hold Your Man ends up endorsing Ruby’s confinement and punitive treatment at the hands of coercive, regimented authority, ironically embodied in older, asexual or “mannish” women. Bad women are also subject to mandatory indoctrination in Christianity, regardless of the existence of any other form of religious belief, and so Ruby is depicted as benefiting from this transitional stage into the “respectable” social order. Her anguished declaration of self-abasement in front of the matron marks the acknowledgment of her own need for “reform”. The desperation with which Ruby and Eddie desire a marriage ceremony to legitimise their baby is set in hysterical counterpoint to the police sirens intruding upon the wedding as an auditory reminder of the authorities to which they must conform. Eddie’s stint in Sing Sing promises the reward of a bourgeois life in the Midwest, the heartland of moral goodness set in contrast to the New York sidewalks, speak-easies, and cheap apartments which provide the settings for the first half of the film. Hold Your Man, then, revels in the creative freedom afforded by lax oversight of the 1930 Production Code, but also reverently anticipates the constraints placed on the American film industry when the Code was more strictly enforced after July 1934.