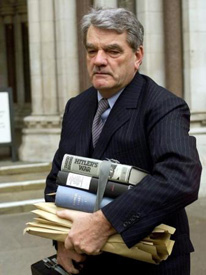 It’s been over three months since the Melbourne Underground Film Festival ended and the first thing that enters my mind about this year’s edition is the controversy stirred by the attempted screening of David Irving’s videotaped address, The Search for Truth in History (1993). Programmed as part of a section called “The Politics of History”, which included documentaries on other historical revisionists as well as speakers on post-World War Two Japan, the Irving screening formed part of MUFF’s defence of the right to freedom of speech. This was but one aspect of this year’s politically themed MUFF, and using Irving as a way to fight censorship and defend free speech is both adventurous and somewhat naive.

Irving’s research has been charged with promoting hatred, and yes it is not mere speculation that Irving’s work supports and is supported by anti-Semitics and racists alike. We must realise that unhealthy ideas can and do reside under the auspices of what we call “free speech”, consequently allowing any individual to incite hatred toward others. With freedom comes responsibility and the scenario MUFF created offered us not only the opportunity of seriously tackling the issue of freedom of speech but also of the hatred that resides in our society.

Unfortunately many people felt the best way to deal with this issue was by way of boycotts, by either not attending MUFF screenings or withdrawing support to the Festival. In this particular case, racism and the people who incite any kind of oppression must be approached head-on and it is our duty as responsible individuals to do this. It is not enough to merely boycott these things as absence is comparable to silence and if ordinary people do not confront these issues then we are no better than spectators – the boycott is a passive act and is a symptom of the consumerist approach most of us adopt in our culture.

Aside from the controversy, this year’s MUFF program also included regular sections like: Mini MUFF, a selection of short films; Street MUFF, films associated with skateboarding, most of which are influenced by the Jackass series; Sexy MUFF, erotica from past and present, such as The Opening of Misty Beethoven (Henry Paris, 1974); and New International, feature films that are eligible for festival awards such as “Best Film”, “Most Gratuitous Violence” and the puzzling “Best Use of the Guerrilla Aesthetic”.

The larger program this year also included other sections inspired by the political theme, such as, Paranoiac’s Anonymous, which included documentaries on conspiracy theories (Dark Secrets, Alex Jones, 2002) and political movements (Reverend Billy and the Church of Stop Shopping, Dietmar Post, 2002); Free Radicals, a diverse selection of “radical” filmmaking ranging from documentaries on Lomo cameras (Shoot Before You Think, Alex Graham, 2003) to Guy Debord’s Society of the Spectacle (1973) to Pasolini’s Pigpen (1969); and Five Fingers of Death, a miscellaneous selection of low budget trash films.

Despite a bigger MUFF, there were few highlights apart from the small Jonas Mekas retrospective, which included The Brig (1964) and Guns of the Trees (1962), and Asia Argento’s debut feature, Scarlet Diva (2002), which opened the Festival. Asia is the daughter of the Italian horror filmmaker Dario Argento whose Sleepless (2001) was last year’s closing film. Another curio was Bumfights (Anonymous, 2002), a documentary showing homeless persons fighting each other for money; however, this film was subsequently cancelled as it was scheduled to screen at the same venue as the Irving film, and all screenings at this venue had been cancelled after the Irving incident. 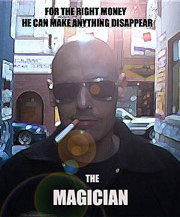 One pleasant surprise was the locally made feature mockumentary, The Magician (Scott Ryan, 2003), which follows a hit-man as he goes about his business striking deals and knocking people off; though this is not so much a hard-boiled action film as a goof-ball comedy about a charismatic hit-man and other odd characters who give a brilliant performance from a hilariously deadpan script.

In previous years, MUFF had a tendency towards the trashy, blood and gore style films and this year is no exception. Several films in contention for the MUFF awards this year were of the “shoot em up n’ blow em up” type. Films such as Bullet in the Arse (Paul Moder, David Richardson, Robin Brennan, 2002) and closing night film Razor Eaters (Shannon Young, 2003) had no shortage of white boys shooting and blowing stuff up. These were contrasted with the more introspective Black Coffee (Wilma Smith, 2002) and Lovesick (Bill Mousoulis, 2002).

Another well-known characteristic of MUFF is Festival director Richard Wolstencroft’s enthusiasm for quoting the likes of Heidegger and his consistently problematic philosophical musing in his director’s statement. Perhaps Wolstencroft should speak with people who’ve been working in factories for most of their lives on a minimum wage and see what they think of the idea of “transcendental fascism”.

Nevertheless, MUFF is a young festival and there’s plenty of room for it to grow. MUFF can become an important fixture and a formidable force in the Melbourne film scene if it loosens its preference for schlock to showcase the diverse output of films produced by independent filmmakers around Australia.