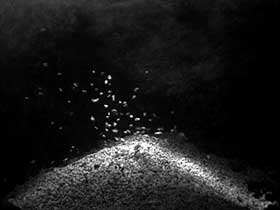 They say good things come in small packages. Case in point: the Media City International Festival of Experimental Film and Video Art, now in its 14th year. Media City is indeed a “small” festival in size – it is four days and nine or ten programs (if you don’t count a Tuesday night event across the river in Detroit) – and most of the programs are held to just over an hour in length. But this lack in quantity allows programmers Jeremy Rigsby and Oona Mosna to focus on quality. They have developed a reputation for intelligent, thoughtful and rigorous selections and expect that their audience will approach the work with a degree of seriousness (they do).

Given the sophistication of the programming it is a bit surprising that Media City takes place in Windsor, Ontario rather than New York, London, or other large metropolis. Something of a Canadian suburb of Detroit, Windsor is a Jekyll and Hyde city, split between art and vice: it has a vibrant and enthusiastic arts community, from the very grassroots to the excellent Art Gallery of Windsor; but it is also home to casinos, strip clubs and a 19 year-old drinking age which attracts Michigan college kids from across the river.

The 2008 festival, as was the case for the previous six editions I’ve attended, had a particularly high ratio of hits to misses. In fact, among the international group shows, there was only one film I disliked. This is a festival that abounds in riches. From the simple playfulness of Jason Halprin’s Super-8 film of Andy Warhol’s mylar balloons (Mylar Balloon Ripoff) to the complex articulations of sound and image in Michael Robinson’s stupendous Victory over the Sun, there was much to like. 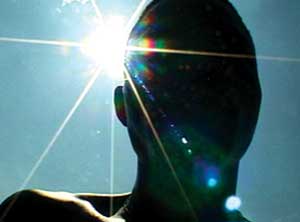 Two of the best works reconfigure or tweak conventional genres in experimental film to unsettle expectations. British artist Rachel Reupke’s video Land of Cockaigne is nominally a landscape work. But she shot it using a camera obscura in Sussex, England, which warps and distorts the image and throws it on its side and upside down at times. There is a feeling of randomness to what we see and sudden, awkward reframings add a sense of loss of control. The destabilising formal approach is mirrored by the non-traditional landscape we do see. None of the usual lush, picturesque scenes but rather a barren field, a grouping of non-descript houses, and a roadside. It is here that Reupke again confounds things. She has staged several people along the road, who seem to be just lying about. A “narrative” intervention in which the characters don’t do anything. Only the sound changes, from ambient noise to the Talking Heads, singing “nothing ever happens…”.

Androa Autoportrait features the Congolese artist and performer Androa Mindre Kolo running through the campus of an art academy in Kinshasa while holding a video camera trained on his own face. Self-portraiture, of course. But the video was actually conceived of and “made” by the Belgian artists Matthias De Groof and Kristin Rogghe. Autoportrait scrambles definitions and notions of authorship. How can someone be credited as the director of a “self-portrait” of another person, especially when that person is his own cameraman? Beyond the conceptual frame and genre provocation of the video, it is also a powerful and compelling piece of portraiture, tinged with elements that undercut norms for the genre. In place of careful composition, we have a shaky hand-held camera that wanders occasionally from Kolo’s face to his chest. We are unable to fix on him as he is constantly in movement. As he runs, his position in relation to the sun changes, sometimes illuminating him clearly; sometimes throwing him into an obscuring silhouette. Any attempt to “see” him as a person is continually frustrated.

Broken Horses by the Vienna-based American filmmaker Peter Miller and Garden/ing by the Japanese artist Sonoda Eriko both work to fracture the image, transforming it into constant movement and near-abstraction. Miller uses an optical printer to create a flicker film of horses. The rapid alteration of shots and the use of dissolves to further blur distinctions forces the viewer to focus on shape and texture rather than seeing the horses as individual animals. Garden/ing is a perplexing video that you stare at and wonder what the hell is going on. Simple in its construction, it is complicated in its effect. Sonoda is playing with trompe l’oeil and image regression as she shoots and reshoots still images of a sliding glass door that looks out onto a garden and clothesline in an arcing pattern from left to right. At intervals, she tapes a mosaic of photographs of the view outside onto the door, so that we no longer see “reality” but a representation of it. Images layer, the view is consumed into itself, and the speed increases to a swirl that no longer allows the viewer to find a point of fixed perspective. It is spinning in a Hall of Mirrors where everything devolves to disorientation. 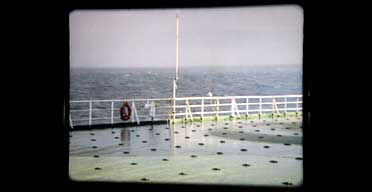 Bachelor Machines: Part I and Part II are two companion films by the Scottish artist Rosalind Nashashibi. The first is a thirty-minute observational film shot on an Italian cargo ship. Unlike the static long-takes of Peter Hutton’s recent ship film At Sea, Nashashibi breaks her film up in several different ways – frequent cutting; an inquisitive, moving camera; and close-ups which fragment the image. She also divides the film into more than 20 “chapters” which range in length from a few seconds to a couple of minutes. This chaptering seems almost arbitrary and adds a subtle, wry humour to the film, which is also found in some of her compositions, particularly some obvious and rather goofy framings of portholes and other openings into nearly anthropomorphic faces. The cinematography is beautiful and Nashashibi has a well-trained eye for finding telling instances of colour, form and movement. The five-minute Bachelor Machines: Part II is a double 16mm film, with two images projected side-by-side. On the left, in a black and white portrait, artist Thomas Bayrle talks about the relationship between machines and the rosary. On the right, out of focus shots of a building exterior and people moving about resolves into focus at the end to reveal a New York City police station. Nashashibi juxtaposes the intellectual denseness of Bayrle’s argument and the obscured vision of the police station. She forces the viewer to split their attention, both sides requiring different modes of concentration. Instead of the formal fragmentation of Part I, here it is the mind of the audience that is fragmented.

Take into the air my quiet breath by the Speculative Archive (Julia Meltzer and David Thorne) is a fascinating exploration the representation of the city, tradition vs. modernisation, and state bureaucracy. Shots of Damascus are tied together by a voice-over narrative of a Syrian architect recounting the 40-year odyssey of a building site and the ever-changing on-again/off-again plans for construction. Decades of governmental indecision almost rise to the level of comedy and the architect’s obsession (he won two early design competitions that were both abandoned) with this rather mundane problem serves to humanise a country that is frequently demonised in the West. Governmental ineptitude and inaction seems universal.

Jeanne Liotta spent seven years filming time-lapse footage of the night sky for her beautiful film Observando el Cielo. It is deliberately rough-hewn, with splices, scratches, and head and tail flares showing, and abounds with a visual energy from the staccato bursts and streaking lines of terrestrial light sources counterpointed against the gliding movements of the stars, moon and clouds in the sky. Liotta frames her shots to include not only the celestial, but also fragments of houses and observatories, tying the earth and the heavens together. The soundtrack, by filmmaker Peggy Ahwesh, bridges the space between the two, by pulling VLF radio recordings out of the air. Observando feels like something Joseph Cornell would have made as a NASA commission. 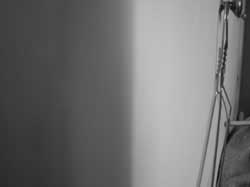 One of the more quiet films in the festival was UK filmmaker Nicky Hamlyn’s Quartet. Hamlyn has a talent for transforming spare interior spaces into sites of fragile wonder. Shot entirely in a single room, the film seeks out geometric forms, lines and angles, to create a domestic landscape of sorts. It is a simple articulation of the idea that beauty can be found anywhere, if one just looks.

Brooklyn-based filmmaker/architect Bruce McClure is, to my mind, one of the best moving image artists working today. Two works performed at the Views from the Avant-Garde in 2006 and at Mark McElhatten’s Walking Picture Palace series at Anthology Film Archives in 2007 were overwhelming, immersive experiences and among the very greatest works I saw each of those years. That Dislocated Big Parts and Dislocated Smaller Parts don’t measure up to those is just a matter of degree of quality: on their own, these are still impressive works. McClure does live “projector performances” which feature multiple projectors, sometimes with modified film gates; film loops that generally are alternating clear and black frames in various patterns that create a visual flicker and an audio pulse or thump; riostats to control the image brightness; and guitar effects pedals to manipulate the sound coming from the projector. McClure “plays” the projectors in much the same way a musician would play an instrument, but he is working with both sound and image. In the last few years it has been the sound of his works that he seems to be concentrating on and instead of being just incidental to the image as in earlier works, now it has a richness and complexity all its own (I’ve been telling him for a couple of years that he needs to release “soundtrack albums” – and not facetiously). The two Dislocated works are more spare in their visuals that other recent work – simple rectilinear images manipulated in differing ways – but they are given a sense of weight through the dynamic audio. McClure proves that the projector truly is a light and sound machine.

The festival closed with a program of live projector performance works by British filmmaker Guy Sherwin (most in collaboration with his partner Lynn Loo). Sherwin, a fixture in the UK experimental film scene since the 1970s, has been exploring the use of the projector as a performative tool for decades. His works, compared to Bruce McClure’s, tend toward the minimal and conceptual side – not surprising given his formative years were during the heyday of the British Structural movement. The highlight of the program, and perhaps the highlight of the entire festival, was the Super-8 performance work Man with Mirror. Certainly minimal and conceptual, this piece is also very moving and gentle. In 1976 Sherwin, then in his twenties, filmed himself on Super-8mm standing in front of the camera while holding a mirror that has been painted white on the reverse side. He raises and lowers the mirror and flips it from reflective side to white side. For the performance, Sherwin runs the film and stands in front of the projector with an identical mirror. He choreographs his movements to those in the film. Sometimes the film images is seen on the white mirror back; sometimes it is reflected on to a wall or ceiling by the mirror. Occasionally the image of Sherwin’s twenty-something year old face is projected on his now nearly sixty-year-old face. The result is unexpectedly moving and a fitting end to the festival.