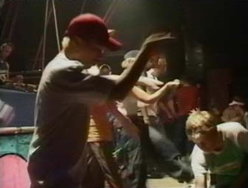 This is the first time I’ve seen more than a couple of sessions from the annual St. Kilda short film festival. So when I say that I was surprised by the consistently high standard of work, my surprise might well be the result of ignorance, an ignorance cultivated through my cynicism about student film-makers and their willingness to subject the lumpen-proletariat public to their ‘visions.’ In general, there seems to be a modernist ‘short story’ stranglehold on the art, with filmmakers matching the internal dilemmas of characters to greater ‘truths’ about ‘the state of our world.’ This, in combination with the recent focus on training ‘auteurs’ rather than expert practitioners in their chosen fields, has appeared to breed a whole era of young directors who perceive themselves as major talents on many fronts, from cinematography and art direction to writing, directing and in some cases, acting. Films in this vein reek of delusions of grandeur. As for film festivals and the sort of people that attend them…to say any more would expose my hardened misanthropic side rather than cast light on any burning social issues!

I attended four blocks of films on the first Thursday evening of the festival and then another four or five on the Saturday afternoon and early evening. I’ll start with The Melbourne Shuffle (Jaqui Davis, 2002) because this had the potential to annoy the hell out of me, as much dance-culture stuff does. Many dance party veterans seem to imagine themselves as somehow more subversive, radical and in touch with the cutting-edge of culture than anyone else. However, Jaqui Davis’ two minute documentary about a specific dance move (‘the shuffle’ of the title) within a distinct sub-culture (trance/trip-hop and house ravers) was more in touch with sub-culture pride than it was with sub-cultural rhetoric. Questioned in the doorways of dance party premises, the documentary subjects recall with rigour and pride the components of a dance move attributed to their very own scene.

The other documentaries in my allotted sessions were of quality but flawed. Your Brother, My Tidda (Kelrick Martin, 2002) was an ambitious entry that explored, as the programme noted, “‘coming out'” to family, living with HIV, and religion – life-changing situations faced by two Aboriginal men.” The film shed light on the issue of representation and agency within a severely marginalised group. I found the stories that both men had to tell (of their families, their early years and living with a life-threatening illness) challenging, not because the stories crossed any personal boundaries but because the men were still quite openly grieving for lost partners and lack of family support. I wondered whether those men were comfortable with the film’s representation of themselves, since there was certainly a case to be made for the camera’s role in marginalising their life-stories further. 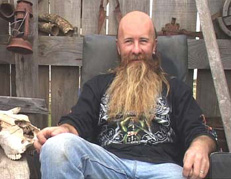 I enjoyed Budgie (Peta Manning, 2002) for its depiction of a man who has lived his life with little compromise but had similar reservations about this in terms of Budgie’s agency. It is clear that Budgie thinks of himself as ‘a character’ but is it in the same way that the director does? Again and again we have been witness to instances where subjects have quite willingly exposed themselves and their quirks for the voyeuristic pleasure of others only to find that upon watching such exposés themselves they feel humiliated or cheated out of the context which makes their actions and behaviours quite normal within their own environments. The banal yet gruesome examples provided by Sylvania Waters, Big Brother and television quiz shows are less about letting us peek into the lives of other people and more about normalising ourselves in relation to the characters depicted.

Her Outback (Elissa Down, 2002) based on the Henry Lawson poem “Past Carin’,” exhibits a similar tendency to objectify its participants. The choice of starkly lit, black and white imagery interspersed with the faces of a variety of farm women was an attempt to give the film an aesthetic merit contradicting the theme of the poem and presumably, therefore, the aims of the filmmakers. That is to say, the reduction of these images to black-and-white abstraction erases the real dimensions of an isolated existence, creating a symbolic, poetic narrative that is not quite appropriate. Since a number of different outback women are depicted, surely their experiences cannot simply be conflated in black-and-white visions, or mediated by the stark beauty of fallen trees stripped bare or whites floating off clotheslines?

Taringa 4068: Our Place and Time (Dennis Tupicoff, 2002) was interesting but too contrived. The sadness a family experiences through the loss of a child is conveyed through other narratives including the development of an architect’s vision and the life detailed by his writer/artist wife. If ever I saw something that could be accused of bourgeois, middle-class exhibitionism, this would be it. And I’m not a Marxist which serves to elucidate just how bourgeois it was. Of course, this in itself does not preclude the worth of a vision, a story or a life but what it does mean is that not all audience members can be expected to delight and grieve with the triumphs and sorrows of that life, especially when it is recorded in a way that invites identification through familiarity rather than observation. In this way, Taringa 4068 commits the crime of Your Brother, My Tidda in reverse since it reproduces the supposed normality of family life on-screen. Dennis Tupicoff’s decision not to contextualise that life within the wider Brisbane or Australian society only supports this point. By contrast, Digging Dirt and Doing ‘Pannies’ (Toby Allender and Patricia Best, 2002) explored similar themes of the construction of the urban environment, but in a way that thrilled me and paid due respect to the BMXers who make their own courses and perform stunts not possible on the crappier bikes of yesteryear.

My overall favourites in the fiction category were The Cook (Tony Rogers, 2003), Blow (Marie Craven, 2002) and Cold Turkey, (Steve McGregor, 2003). All types of filmmaking have their own points of ease and difficulty. With fiction, I imagine the greatest difficulty is in getting the acting, the script and the visuals just right. The ease is in being assured that stories do not have to conform to any particular set of principles, as long as you can make the audience understand the fictional universe that characters inhabit. Both Blow and The Cook exhibited acting, script, visuals and sound that were well-matched to each other. A quick glance at the crew lists gives some idea as to why this might be: the tasks are farmed out in accordance with skill rather than in accordance with a hierarchy that makes an ‘auteur’ of the director and mere technicians of everybody else.