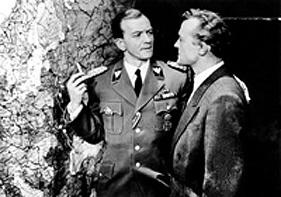 Robert Siodmak is best known to English language audiences for the atmospheric noir thrillers he made during his ten-year sojourn in Hollywood from the early 1940s onwards. The best of these, such as The Spiral Staircase (1945) and The Killers (1946), are outstanding examples of the genre. They are also exemplary of the connection between ’40s American cinema and German “Expressionist” cinema of the ’20s and early ’30s that resulted from the presence in Hollywood of an expatriate generation of German filmmakers who had fled the Nazi regime.

After World War Two, Siodmak worked for a time in Britain and France before returning to Germany where he made two noteworthy films: The Rats (Die Ratten, 1955), an allegory set in the ruins of Berlin looking at the torn fabric of Germany’s post-war society; and The Devil Strikes At Night (Nachts Wenn der Teufel Kam, 1957), which deals with the capture and prosecution of a serial killer against the backdrop of the crumbling Nazi regime.

The Devil Strikes At Night is based on the true case of Bruno Lüdke, a simple-minded itinerant who murdered over 80 women across Germany during an 11-year period that spanned the Nazi era. In Siodmak’s version of the events, a waitress is murdered by Lüdke (Mario Adorf) during a nighttime air raid in wartime Hamburg. Her married lover, Willi Keun (Werner Peters), is arrested and charged with her murder. Inspector Axel Kersten (Claus Holm) is assigned to the case. He meets a police clerk Helga Hornung (Annemarie Düringer), with whom he begins a romance, and her distant cousin Major Thomas Wollenberg (Carl Lange). Lüdke is eventually pinpointed as the waitress’ murderer by Kersten and associated with a string of unsolved murders. The SS in the form of Gruppenfuehrer Rossdorf (Hannes Messemer) are initially delighted with Kersten’s work as it appears useful justification for the extermination of mental “degenerates”. But when Hitler takes a personal interest in the case and sees it as a failure of Nazi law keeping, it is quashed and all official knowledge of it denied.

Given Siodmak’s roots in the Expressionist tradition, The Devil Strikes At Night has been compared to Fritz Lang’s M (1931), but this is only partly justified. Both films deal with a serial killer but whereas the killer and the fear he engenders amongst the ordinary citizenry is the centrepiece of Lang’s film, Siodmak’s killer is only a pretext for the director’s main concern, which is a coming-to-terms with the Nazi era. The asystemic murders carried out by the mentally deficient Lüdke (his only victim that we see is a slatternly waitress) are contrasted with the brutal logic of the genocidal Nazis.

Siodmak does make use of Expressionist stylistics, in particular, deep chiaroscuro lighting and dramatic upward-facing angles during the murder of the waitress. But this, once again, is a limited feature of the film. There are other stylistic elements and particular scenes that can be traced to the various generic “sources” of the film – the dramatic opening scene featuring Lüdke hiding from his pursuers (a scene which has no place in the rest of the film) forms a backdrop to the horror-film style titles, while a re-enactment by Lüdke, once he has been captured, of one of his murders, impressively shot in an abstracted manner, emulating the killer’s memory of the event, is well worthy of Hitchcock. But for the most part, Siodmak invests the underlying format of the Hollywood thriller with its easily-discernible tripartite structure of set-up, arrest and aftermath, two photogenic leads (who, had this been made during Siodmak’s Hollywood years, could easily have been, for example, Ray Milland and Jane Wyman) and a dewy-eyed ending, with a determined, although not intrusive political agenda. The director takes considerable pains to explain the material and social conditions of the time, the relationship of the Gestapo to the police and justice system, pursuing realism even to the method of strangulation used by Lüdke. It is this vital relationship to a historical reality which makes The Devil Strikes at Night cohere despite its amalgamation of many different stylistic elements and influences.

Whilst the title suggests the themes of mental and physical terror, which resonate throughout Siodmak’s career, the main concern is not Lüdke, his heinous acts, nor his capture (which is dealt with in a perfunctory manner). What is of real interest to Siodmak is the opportunity the narrative offers to paint a portrait of Germany awakening from the Nazi nightmare. Admittedly here the Nazis are at the end of their days and many ordinary people, one can assume, who once may have been believers would have by then lost faith in the Third Reich. But Siodmak represents them as a people captive of an evil force, rather than complicit with it.

The Nazis, and in particular the Gestapo, are depicted as venal, corrupt, hypocritical, overbearing and ruthless. Rossdorf’s aide is a cadaverous blind-in-one-eye henchman, whilst the smug Rossdorf himself holds forth on Nazi ideas of racial purification. And in an extended sequence involving Lüdke and a winsome Jewess being hidden by a German couple, the death camps of Auschwitz are acknowledged.

On the other side of the coin, Kersten and his girlfriend Helga, are shown as innocent, honest folk. The only ordinary citizen in the film who subscribes to the Nazi rhetoric is the buffoonish Party member Willi Keun. Yet he is so patently gullible as to be scorned even by the Nazis. All the other characters, other than the SS members, are either openly cynical and hostile, or simply enduring of their lot in an atmosphere of intimidation and suspicion, and so effectively disassociated from the Party, its rhetoric and acts. It is a reassuringly simple, and no doubt at the time much needed, message and another element that, once again, suggests the legacy of Hollywood storytelling in Robert Siodmak’s late work.