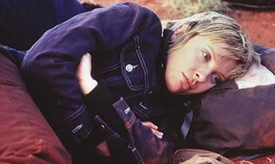 In recent weeks, members of the Australian film and television industry have been up in arms at the possibility of Australia’s cultural industry being undermined by current free trade agreements with the US. A key theme echoed throughout the outcry has been that local film and TV production is intrinsic to national identity and that Australia’s cultural industry needs planning and protection, nourishment and support, not the opposite. Culture is not up for trade. Without such buffers, the local film and TV industry risks not existing and local screens being dominated by international, primarily US, product. Given the customary reticence of Australia’s public figures to express strong beliefs – political or artistic – it’s been an inspiring few weeks. The politics that was constantly heard in speeches at the recent Australian Film Institute (AFI) Awards, in particular, was notable. Yet while the argument for protecting the local industry is all too clear, consensus on the quality of local film output is far from unanimous. The various Australian comedy features released this year hardly rated a mention at the AFI Awards. As Jake Wilson observes in this issue, most of these intentionally populist films weren’t very popular at all. The culture in which films are made, received and talked about is equally as important as the industry itself. And at present it appears this culture is in flux. What were once film organisations, for example – bodies with charters devoted to providing access to and a concomitant appreciation of cinema – are now exponents for an emerging culture of digitally-based, new media art, and the promise of the digital future in general. Local film culture is equally in need of strong voices that politicise our relation to film and question the politics of the digital future.

The imminence of digital delivery in both the TV and cinema industries and the ever-increasing reality of global capitalism are two characteristics of the Australia-US free trade agreement. They are also themes that, it would be reasonable to argue, feed into a contemporary zeitgeist. Attitudes toward a changing world and the blueprint of power that underlie it are explored, as several articles in this issue illustrate, in contemporary cinema through the idea of “place”.

The films of Tsai Ming-liang have on various occasions been compared with those of Antonioni, the cinematic master of alienation. As Brian Hu argues in this issue, themes of alienation continue in Tsai’s recent short film, The Skywalk is Gone, but in this case the characters’ relation to the places around them is distinctly marked by nostalgia. City landscapes are forever changing in response to technological advancement and the flow of capitalism. As a result characters roam in search of places, objects, people that signify history, locality, tradition, the mark of time, uniqueness, humanity, and so on.

The theme of place and one’s relation to place is explored from a different angle in the recent Australian film Japanese story. As Felicity Collins argues, the film belongs to a post-Mabo era, an era in which there is an increasing (if ever steady) consciousness toward the indigenous population of Australia, their age-old relation to the land and Australia’s colonial history. Japanese Story dramatises its relation to this era by granting the Australian outback a very particular status in its story. The gravity of the profound spiritual malaise that haunts the Australian nation and its race relations is evoked in the quite radical turn of events that transpire during the characters’ time in the Australian outback.

The notion that cinema is unique among other artforms in enabling a direct representation of reality is not lost on a director like Abbas Kiarostami. Cinema not only merely represents “places”, it also significantly contributes to how they are viewed, read and interpreted. Hence, the thrill of watching films from cities and countries that rarely if ever feature in mainstream media. Or, on the other hand, the immediate recognition of places, like the New York City landscape or the American suburb, high school or mall, that are self-evidently familiar and come to be considered as manifestations of “home”.

In his major essay on Kiarostami, Stephen Bransford analyses the manner in which Kiarostami brings this function of cinema to the forefront and makes it the basis for his politics: “Space and place in cinema have traditionally been represented either as background to the main narrative action or as an aesthetic spectacle, but, in Kiarostami’s films, the ordinary, day-to-day reality of space and place is given primacy”. Bransford takes issue with those arguments that accuse Kiarostami of being apolitical on the basis that he represents the natural world as eternal, exotic, unchanging, and paramount. In effect, Kiarostami not only reveals the fabrication of place and space which cinema supports but acknowledges the marginalisation of specific places, “nowhere” places, namely the rural village, by making these and their characters the subjects of his cinema. Kiarostami’s sensitivity as a filmmaker and a human being living in and responding to a rapidly changing world is unquestionable.

Finally, as you may already be aware, Senses of Cinema is undertaking a donations drive. Over the last four years, the journal has consistently provided a forum for the critical appreciation of cinema as well as access to a range of information. In order to continue doing so whilst also updating the website and improving all aspects generally, we require greater funds. Any financial support would be of great assistance and for which we would be extremely grateful. Please visit the donations page for further information.

Special thanks for this issue go to Noel King and Max Le Cain.