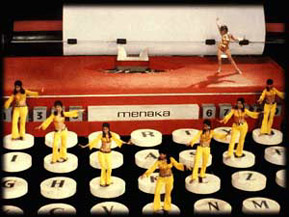 From an Indian publicity item:

Congratulations on a 5th century score! Hazel-Eyed-Chic-Sleek-gorgeously glamorous twinkle-toed charmer of the silver screen incidentally has finished the 500th film of her career in Dil Daulat Duniya. Perhaps it is a record all over the world for any film artist.

This is the caption that precipitates Helen, superstar of Indian cinema, bursting onto the screen in a cacophony of jangles and spangles. Helen, Queen of the Nautch Girls, a half-hour documentary, sketches a portrait of the public and private personae of the all-singing, all-dancing deity of the most prolific film industry in the world.

Over four decades Merchant Ivory Productions have nurtured and sustained a large extended filmmaking ‘family’ – a melting pot of cultural and creative diversity drawn from every facet of the game. The approach has paid off: with an arsenal of awards (including two Oscars) in hand, their films have earned the deserved acclaim of an international audience. Their features, shorts and documentaries, whilst varied, share an interest in human complexities: external layers of superficial characterisation are stripped back to reveal the fundamental motivations that pilot the people on the screen. The same candid honesty comes to the fore in Helen, Queen of the Nautch Girls, securing its status as a long time favourite of Merchant-Ivory fans.

It would have been easy to poke fun at the crass kitsch of the Bollywood hit parade that opens the film, but James Ivory’s socio-artistic commentary (narrated by director Anthony Korner) sets a detached, almost disinterested tone, lending the documentary a gloss of seriousness. As Helen shimmies through a series of film clips in a blur of noisy colour, she and the phenomenon of her popularity are verbally examined.

Is she the symbol of a new Indian folk art, or, as her traditionalist critics argue, the final degeneration of a dance culture refined over 5000 years? The answer, probably, is both. In the words of Vijay Mishra, “modernity is disavowed even as it is endorsed; tradition is avowed even as it is rejected.” (1) The implicit contradiction is generated from a narrative form located in tradition and a textual ideology firmly grounded in modernity. The documentary dramatises this binary opposition with juxtaposing extracts: Helen dressed in classical costume is immediately superseded by Helen in black stockings and mini-skirt. The music and choreography too bridge the ancient and the contemporary.

So Helen cavorts continuously on, apparently oblivious to the furore she whips up with every step and turn. Cinemas are truly the temples of modern India, and the popular musicals of Bombay embody the fantasies of a nation. When (as we are told) ninety percent of the population live in small insular villages, it is easy to understand the allure of the distant urban razzmatazz the film gods inhabit.

The strict ethical code governing the industry at the time, far from curtailing the creative content, actually enhances it. With kissing and even affectionate touching expressly forbidden by the censors, the dance assumes a surrogate sexuality that the characters themselves cannot consummate. While Westerners register a certain oriental eroticism, the tangible symbols of passion – the moths circling candles, the touching wine cups – are often lost on them.

Helen, deeply alluring, wildly unattainable, seducing the camera with her kohl-laden eyes, systematically taunts her helpless male victims. A caged black man, a man bound to his chair with mice crawling up his legs and torso, a pasty faced Westerner in a bar, all watch impotently as she writhes and gyrates with infuriating provocation. Hands grasp at her in silhouetted desperation before she bursts through the screen in chaste triumph. She towers over a low-angled camera with a smile of pseudo-innocence.

As suddenly as it began, the music and dancing stops. Helen, the personality behind the screen persona, takes centre stage, through an interview with the director. Long uninterrupted shots underpin the dialogue; Helen doing her yoga, Helen plaiting her hairpiece, Helen painting her eyes, replace the frantic dance montage of the first half.

The small irony that this national idol is actually of Anglo-Burmese heritage is betrayed in her speech. Her voice – like a well-heeled English schoolgirl making a timid attempt at an Indian accent – offsets the earlier frenzied glitz with its calm incantations. She is matter-of-fact about her impoverished childhood in exile and equally impassive on her rise to wealth and fame. She shows no hint of false modesty and is keen to maintain an air of professionalism, though this is at times incongruous with her naive sweetness. “I have three, perhaps four years left,” she muses, with characteristic composure, on her dancing career.

The camera manifests a fascination with her face in lingering, sometimes extreme close-ups, forging a feeling of intimacy with her. Her Romanesque nose, full velvet eyes and cheeks and waves of chestnut hair are undeniably striking, both before and after the make-up. Her figure is sleekly plump – a telling virtue in a land of under-nourishment. It is difficult to imagine her here, in the privacy of her dressing room, splashing herself around the gaudy cabaret film sets with their aura of promiscuity and ostentatious theatricality. Yet this in itself is testament of sorts to her professional dedication. She wants to be taken seriously as an artist, and Ivory and Korner allow her that dignity, despite the whimsical undertones.

Although India now has a sound repertoire of films without even a hint of a song or dance, recent years have revealed a trend in the rest of the world – and mainstream Hollywood in particular – to embrace what it had initially been so keen to distance itself from. Baz Luhrmann places part of the inspiration for Moulin Rouge (2001) in Bollywood cinema, and the huge box office and recent Oscar success of Chicago (Rob Marshall, 2002) can be seen as another tribute of sorts.

Even the new wave seems to be coming round to the idea. Mira Nair, one of India’s most eminent and respected filmmakers, has made her mark by courting controversy. Indian Cabaret (1985), Children of Desired Sex (1987), Salaam Bombay! (1988), and Kama Sutra: A Tale of Love (1996) question and provoke, and yet her recent film Monsoon Wedding (2001), on one level a probing analysis of the modern arranged marriage, is at heart a celebration of good old-fashioned Bombay-talkie style.

For all Helen’s projected vulgarity there is an overriding awe of her grace and sensuality that deems her worthy of Merchant-Ivory’s timeless tribute. They seem to have found in this screen goddess the core dignity that carries off – even vindicates – the kitsch and glitz of an entire nation, and justifies the most popular genre in motion picture history.