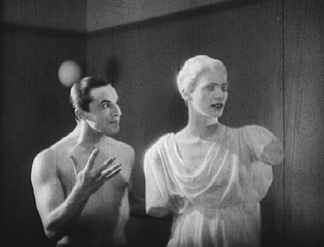 The Blood of a Poet begins with a shot of a chimney beginning to collapse followed by a series of statements proclaiming that poetry should be deciphered in the same way that the work of the greatest painters – Pisanello, Paolo Uccello and Andrea del Castagno, the “painters of enigma” – has been. (1) The film insists on such acts of decipherment, with the ultimate ‘enigma’ of the film being revealed as Cocteau himself. (Cocteau was one of the most multi-talented artists of the 20th century: a film director, poet, novelist, painter, playwright, set designer and actor). In keeping with this, The Blood of a Poet is suggestively biographical, reflecting upon either events that took place in Cocteau’s life, his own private mythology on the world of the imagination, or the people who influenced him in the most profound and intimate way.

The Blood of a Poet, Cocteau’s first film, looks more like an animated cartoon then a true live-action film. It is surreal and uninhibited in its handling of visual imagery. What can be loosely defined as a story-line begins with a young man, a poet, attempting to draw a series of faces. Suddenly, the mouth of one of these ‘faces’ rubs off in his hand and starts smiling. Terrified, the poet accidentally smears off the mouth of the statue he was working on previously. The statue comes to life and, in return, forcefully sends the young man through the mirror to another, imaginary locale at a mysterious hotel. (2)

For Cocteau, poetry was the foundation of all the arts: he published his first volume of poetry at the age of 19, and remained consistently faithful to writing poetry throughout most of his life. Essentially, Cocteau created a visual poem with this film, a tribute to the artistic process and the pain and self-reflecting doubt it causes. The young poet’s journey to a mysterious hotel becomes an exploration of the artistic process. In the hotel, the young poet voyeuristically witnesses – while looking through a keyhole – a serious of shocking, uncomfortable scenes involving a child being whipped by her mother in something resembling a strangely orchestrated, sadistic ritual. Both the mother and child play a wicked game with each other resulting in the child levitating up under the ceiling while the threatening mother pursues her with a whip.

Cocteau presents artistic effort as a dangerous, dark, self-inflicting act of suffering, while suicide or violent death are also recurring motifs in the film. In one scene, the film shows a group of schoolboys, violent young brats, throwing snowballs at each other. Accidentally, one of the boys gets killed by a snowball; he falls down and bleeds in theatrical, stagy fashion. Later in the film, the poet transforms into a high society figure who plays a game of cards, loses, and shoots himself in the head. These motifs of suicide and suffering are most likely not inconsequential: Cocteau’s father committed suicide when he was nine or ten. Cocteau admitted that his father’s suicide left an indelible mark, making him reflect on human weaknesses and the frailty of existence throughout his work.

Cocteau was born into a wealthy family in 1889 in a small town near Paris. He was sent to a private school, from which he was quickly expelled. Cocteau subsequently ran away to Marseilles where he lived in the ‘red light district’ under a false name, instigating a relationship with a woman 13 years his senior. Later in life, he formed several very close and influential relationships with theatrical tragedians, and openly revealed himself as homosexual.

In 1908, Cocteau befriended Edouard de Max, a famous tragedian of the Paris stage. In the following year Cocteau met the Russian impresario Sergey Diaghilev, one of the most revolutionary choreographers of his time, and who ran the Ballets Russes. The influence of the theatre and stage is evident throughout Cocteau’s film: much of the movement in The Blood of a Poet is evocative of a ballet, or even the exaggerated theatricality of pantomime. The poet’s facial expressions, physical gyrations and general bodily movements are all very theatrical and dramatic, especially when he is being subjected to mental suffering or torture at the mysterious hotel.

Soon after WWI Cocteau met the future poet and novelist Raymond Radiguet, whose premature death of typhoid fever led the artist to a severe opium addiction. Cocteau was even hospitalized for opium poison in 1929, after which followed a period of cure. Cocteau’s addiction can be linked to a series of symbolic dream-like sequences in the film. The Blood of a Poet‘s use of imagery, non-linear development of events, exploration of the world of imagination and psychological irrationality, as well as its ruminations on the subjects of death, love and lust, among many other themes, lead to it being commonly compared to two of Luis Buñuel’s most scandalous films – Un chien andalou (with Salvador Dali, 1928) and L’Âge d’or (1930). Although Buñuel’s images are more shocking, offensive and forceful, carrying a more frenetic charge than Cocteau’s dreamy, unhurried images, the work of both filmmakers provides many vivid examples of Surrealist filmmaking, a cinematic tradition that should be less analyzed for its meaning and more appreciated for the sheer experience of its images.