Celebrating its 20th anniversary, the 2001 Sundance Film Festival was blessedly low on buzz, hype, and Hollywood power players. The threat of union strikes looming large, coupled by the imminent economic slowdown, made for relatively scarce representation from studios and A-list agencies and management firms. It was several days into the Festival before word of the first sell spread, and the wheeling and dealing on Main Street, Park City was at a minimum. That said, the emphasis on the films themselves seemed stronger than in past years…funny how that works.

The Festival started off with the Salt Lake premiere of Christine Lahti’s feature directorial debut My First Mister (2000), the story of an intergenerational relationship between staid shop-owner Albert Brooks and his pierced and black-clad, new clerk LeeLee Sobieski. Lahti’s film was joined by Kasi Lemmons’ follow-up to her widely praised Eve’s Bayou (1997), The Caveman’s Valentine (2000), starring Samuel L. Jackson as a former Julliard musician battling life on the Manhattan streets and the delusions which torment his mind. 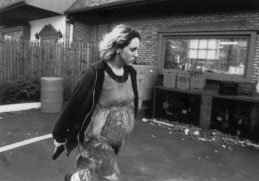 Daniel Minahan’s Series 7 (2000), a grim parody of America’s infatuation with reality television and media sensationalism, emerged as the most memorable and satisfying of the Festival premieres. Brooke Smith stars as a pregnant, relentless contender on a reality show which arms five contestants and tracks them on live feed until the last person alive is declared the winner.

Adam Brooks’ The Invisible Circus (2000), replacing at the last minute the scheduled premiere of the Jodie Foster-starring The Dangerous Lives of Altar Boys (2000), was an irrefutable dud. Based on the sensitive, evocative novel by Jennifer Egan, Brooks strives to commit every cardinal sin of literary adaptation within the film’s scanty 98 minutes. The considerable talents of Cameron Diaz, Christopher Eccleston and Blythe Danner are squandered in this story of a young woman who retraces the late-1960s journey of her hippie older sister across Europe, searching to discover why that earlier trip ended in a leap from a seaside cliff.

The results of the Dramatic Competition were far more successful, with director/screenwriter Henry Bean taking the Grand Jury Prize for The Believer (2001), based on a true story of a Jewish scholar turned fervent neo-fascist. The electric John Cameron Mitchell nabbed a Best Director nod and the Audience Award for the screen realization of his off-Broadway hit Hedwig and the Angry Inch (2001). Writing, directing, and starring as the East Berlin lad turned transsexual trailer park punk rocker, Mitchell delivers a phenomenal performance destined for Rocky Horror (1975)-style legendary status.

The two dramatic entries which came closest to garnering festival-wide buzz and sharply dividing audiences were Richard Kelly’s teen sci-fi Donnie Darko (2000) and Christopher Nolan’s enigmatic noir Memento (2000). The former is an entrancing tale of supernatural forces in suburbia, produced by Drew Barrymore and starring the millennium’s newest brooding adolescent male, Tobey Maguire-lookalike Jake Gyllenhaal. Having narrowly escaped death when a jet engine falls from the sky and through his bedroom ceiling, and tormented by ominous orders from a six-foot rabbit, the eponymous high school malcontent struggles to understand what path the sinister forces have seemingly ordained for him. Donnie Darko boasts a solid cast – Mary McDonnell as Donnie’s distressed mom; Jena Malone as his wary girlfriend, battling demons of her own; Barrymore and Noah Wyle as high school teachers fighting the stringency of the American educational system; and Patrick Swayze in a hilarious parody of a sycophantic self-help guru. And its late-1980s “death of the Reagan era” setting, an unsettling period for nostalgic remembrance, makes wonderful use of soundtrack with such reminiscent fare as INXS’ “Never Tear Us Apart.” Ultimately, the film’s candid appraisal of the suffocating anxieties of suburban adolescence makes Donnie Darko the darker, truer cousin of American Beauty.

The love-it-or-hate-it Memento, the ambitious follow-up to Christopher Nolan’s acclaimed first feature Following (1998), is a cleverly constructed manipulation of noir narrative which retraces in reverse order a wronged man’s search to solve the mystery of his wife’s brutal murder. Guy Pearce plays a revenge-driven Everyman suffering from traumatic loss of short-term memory, forced to take Polaroids and tattoo his body with reminders of the mysterious interlopers who constantly traverse his path, from a battered woman (Carrie-Anne Moss) haunted by her own lover’s disappearance to a badgering cop (Joe Pantoliano) who may not be trustworthy. Laid out chronologically, Memento‘s story is not particularly unique or engrossing.

Despite a charismatic performance from Pearce, and some slick production values, Memento seems gimmicky and manipulative. Striving to suture the stylistic fatalism of The Limey (Steven Soderbergh, 1999) to the plot convolutions of The Usual Suspects (Bryan Singer, 1995), Memento winds up tripping over itself and falling flat. The Sundance jury did not agree, however, and awarded Nolan the Waldo Salt Screenwriting Award.

The other dramatic notables were more quietly subtle but no less effective. Writer/director Patrick Stettner’s The Business of Strangers (2001) stars Stockard Channing and Julia Stiles in what is being billed as a feminist In the Company of Men (Neil LaBute, 1997). Both unflappable, endlessly self-possessed actresses deliver steely performances in a tale of female bonding across professional and generational lines. Set in the antiseptic, cookie-cutter design of corporate offices and airport concourses, Channing’s hyper-ambitious career woman, a newly-named CEO, finds herself stranded for a night with tattooed toughie Stiles in an airport hotel. Venting their respective anger first at each other, then on an unctuous headhunter who becomes their unsuspecting prey, the two forge a bond based on the pent-up frustrations of women fighting the injustices – professional and sexual – of a man’s world.

The regal yet detached British actress Tilda Swinton delivers her most human performance to date in Scott McGehee’s and David Siegel’s revisionist take on the psychological thriller in The Deep End (2001). Playing an American mother intent on saving her gay son from being framed for the death of his lover, Swinton successfully wrests sympathy from a brooding gambler and would-be blackmailer (ER‘s Goran Visnjic). Set on Lake Tahoe, the film’s exquisite cinematography illustrates the surface tension of its suspenseful narrative with metaphorically intricate shots of fluidity. Director of photography Giles Nuttyens was honored with the dramatic award for cinematography.

The talented but underused actor Todd Field (Walking and Talking [1996], Ruby in Paradise [1993], Eyes Wide Shut [1999]) delivers impressively as director of In the Bedroom (2001), a somber portrait of the sudden death of a promising young man and the aching aftermath of tragedy. Tom Wilkinson and Sissy Spacek were the recipients of a special award for dramatic performance for their roles as grieving parents.

Among the dramatic near-misses, writer-director Cory McAbee (lead singer of the humorously experimental musical group The Billy Nayer Show) daringly fuses film genres in The American Astronaut (2000), a hybrid of science fiction, film noir and musical. The closest analogous approximation to this film’s tone is the musical stylings of rockabilly. Alternately retro and futuristic, the film approaches the unsettling visual alacrity of Eraserhead (David Lynch, 1976) but falls short, emerging instead as an eerie rift on Spaceballs (Mel Brooks, 1987).

Zhang Yimou’s The Road Home (2000), starring Zhang Ziyi (Crouching Tiger, Hidden Dragon [Ang Lee, 2000]), took the Audience Award in the World Cinema competition. Other standouts included two offerings from Brazil, Andrucha Waddington’s Me, You, Them (2000) and Sandra Werneck’s Possible Loves (2000). The former, in which the beguilingly earthy Dolores (Regina Case) gads about with three men under one roof, is a fairy tale reversal on the harem and a wry commentary on Latin machismo. Photographed with a lush, Terence Malick-style appreciation for natural settings, the arid northeastern region of Brazil has never appeared so beautiful on celluloid. Possible Loves, a story of the alternate lives and loves of a destiny-driven man in Rio de Janeiro, shared the Jury Prize for Latin American Cinema with the Mexican selection Without a Trace (2000), a woman’s road movie written and directed by Maria Novaro.

Sergio Castilla’s Te Amo (Made in Chile) (2000) was one of the least pretentious and most moving of the World Cinema selections. Chilean cinema rarely examines stories of youth, but this tale of four troubled teenagers from displaced backgrounds and broken homes portrays genuinely and unflinchingly the pains of adolescence. Te Amo is a film that is carried by its actors, amazing considering that its principal leads are four teenagers whose raw intensity appears professionally untrained.

Director Henrique Goldman’s internationally-financed production Princesa (2000) has an intriguing premise – a 19-year-old Brazilian transvestite recently arrives in Milan’s red-light district, the world’s largest market for transsexual prostitution. Combining Fellini-esque decadence with a Cinderella story of the good-hearted innocent who longs for the happy ever after, Princesa‘s fatal flaw is in the wooden performance of lead Ingrid De Souza, whose monotone delivery and drained energy sap all emotion from the story.

Southern Comfort (2000) director Kate Davis’ compassionate portrait of female-to-male transsexual Robert Eads, suffering untreated from ovarian cancer in a deep South trailer community, was awarded the Grand Jury Prize in the documentary competition. Tying for documentary audience award was former professional skateboarder Stacy Peralta’s (also voted best documentary director) story of his humble beginnings in the legendary Santa Monica gang in Dogtown and Z-Boys (2000), and Tom Shepard’s Scout’s Honor (2000), a resolute appraisal of the anti-gay policies of the Boy Scouts of America which also garnered the Freedom of Expression award. A special jury prize was bestowed upon Edet Belzberg’s Children Underground (2000), a grim depiction of the squalid lives of Bucharest street orphans and runaways, and veteran documentarian Albert Maysles won the cinematography award for his work on Lalee’s Kin: The Legacy of Cotton (2000).

Another veteran of the documentary form, William Greaves delivers impressively with Ralph Bunche: An American Odyssey (2000), a portrait of the under-known former United Nations ambassador. Largely responsible for mediating the only signed pact between Israel and Palestine (in the 1949 armistice), Bunche was the first African-American to be awarded the Nobel Peace Prize, in 1950. A traditionally formatted documentary of an untraditional historical figure, An American Odyssey is scheduled to appear on PBS (US cable channel. Ed) later this month.

Barbara Hammer, also a prolific and longtime documentarian but of a less traditional technique, fuses truth and myth in her history of pre-Stonewall lesbian representation in History Lessons (2000). Refuting documentary’s claims to fact, History Lessons disposes with voice-of-God narration and shuns the Celluloid Closet (Rob Epstein, 1995) style of PC representation. Instead, Hammer juxtaposes a wealth of archival footage with her own cleverly manipulated interventions, inserting words into the mouth of Eleanor Roosevelt and staging witty takes on lesbian stag films.

Other notable documentary selections include Doug Pray’s boisterous Scratch (2000), a history of the explosive musical form of turntablism; Sandi Simcha DuBowski’s examination of gay Hasidic and Orthodox Jews struggling to reconcile their religious and sexual orientations in Trembling Before G-D (2000); and Mark Lewis’ droll account of The Natural History of the Chicken (2000). André Barcinski’s and Ivan Finotti’s portrait of a cult Brazilian horror director in Coffin Joe: The Strange World of José Mojica Marins (2000), was a popular midnight screening and recipient of a special jury mention.

Itinerant festival habitué Ari Gold’s Helicopter (2000) is a satisfying second effort to his striking one-minute-long Culture (2000), which made a memorable debut two years ago at Sundance. Superb montage editing and a hilarious potty-mouthed sensibility made Andrew Lancaster’s In Search of Mike (2000) a fun and inventive digression. From New Zealand, James Cunningham’s Infection (2000) displayed real creative imagination within wondrous animation – a kung-fu fight sequence between two digitally disembodied hands was a festival highlight. And Don Hertzfeldt’s Rejected (2000) demonstrates that there is a life for impudent animation after the advertising film that commissioned his work refused to exhibit his blasphemous artistry. Thankfully, Sundance is not yet wholly assimilated into mainstream mediocrity and so still offers a safe haven for edgy indie fare…But for those convinced that conformity has already cast its shadow over Park City, there are near inexhaustible options proliferating from the rival festivals endlessly spawning about town: Slamdance, Slamdunk, No Dance, Lap Dance, Troma Dance…