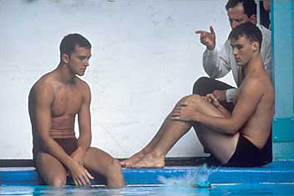 At first glance, Russell Mulcahy would not seem to be an obvious choice as director for a torrid Australian family melodrama. Firmly established in Hollywood with a career defined by medium budget action features (Ricochet, 1991, the Highlander franchise) and horror-themed TV series (Tales from the Crypt, 1989, The Hunger, 1997), the Australian director nevertheless responded strongly to Anthony Fingleton’s autobiographical story of family dysfunction.

I thought it was a very moving story. I saw a lot of my own father in there so it touched me—it hit a certain spot in my own personal history. (1)

Fingleton’s script, based on his novel of the same title, describes his troubled life as the second oldest of five children growing up in 1950s Brisbane. His father Harold (played by Geoffrey Rush) is a perennially disaffected man. Tenuously employed and bitter at lost sporting opportunities in his youth, Harold takes his disappointment out on the people closest to him, his long-suffering wife Dora (Judy Davis) and five children. A violent alcoholic, Harold plays favourites, singling out his bullying oldest son Harold Jnr. (Kain O’Keeffe) and middle child John (Thomas Davidson) for preferential treatment.

Tony’s (Mitchell Delle Vergin) fondness for the piano and literature attract a very different form of attention. Depending on his degree of drunkenness, Harold’s antipathy towards his second son is expressed through everything from benign neglect to overtly homophobic epithets. It is only when Tony and John demonstrate prowess at the swimming pool that Harold begins to take his second son seriously. But even then, his plans for swimming glory are always focussed on John rather than Tony. As the two boys achieve increasing success at State and Commonwealth level, Harold’s manipulative training strategies gradually undermine the close friendship between the two siblings, with permanently destructive consequences.

Swimming Upstream (2002) is an interesting genre hybrid, part family melodrama, part sporting saga, part coming-of-age story. It is also a film concerned with the representation of a particular social and cultural milieu. Fingleton’s script, while portraying Harold for the most part as a deeply unsympathetic character, is nevertheless interested in exploring the emotional travails of a specific generation of post-war Australian men. The depiction of the aggressively blokey 1950s pub culture and industrial unrest on the Brisbane wharves, and Harold’s concomitant employment problems and inability to relate meaningfully to his family, ensures the film paints a broader picture of Australian society beyond the boundaries of the Fingleton family home.

This concern with exploring the broader social and cultural parameters of the post-war generation is what attracted not only Mulcahy, but also Rush to the project.

I think Harold’s generation was served a very bad period of history in terms of living through the Depression following on into the war. These men struggled with their demons, as did Harold and were very frustrated by the lack of work and money. They carried a lot of anger…I grew up in Brisbane and saw a good deal of my own father in Harold. So this was a project I was particularly keen to be involved with—I felt very close to it. (2)

If Swimming Upstream is a genre hybrid, it’s different generic elements cohere around the dramatisation of the destructive relationship between father and the second son. Adopting the retrospective, first person narration common in Australian rites-of-passage dramas (The Year My Voice Broke [John Duigan, 1989], Looking for Alibrandi [Kate Woods, 2000]), the story, spanning more than a decade, is told from Tony’s point of view.

As the young Tony (beautifully played by Delle Vergin) becomes increasingly cognisant of his father’s antagonism, he and his siblings retreat to relative safety of the local pool. In Swimming Upstream, the swimming pool, along with the traditional setting for family melodrama—the home—become the critical locations for emotional conflicts and resolutions.

Mulcahy directs these familial conflicts with an impressively sensitive hand. The gloomy interiors of the classic, turn of the century, timber-frame Queensland house provide an appropriately claustrophobic space in which to stage the frequently torrid and sometimes violent, family confrontations. Mulcahy consistently frames characters, particularly Dora and Tony, through the constraints of doorways and windows, suggesting the particular oppressiveness of their respective situations.

Mulcahy’s background directing video clips and action films also finds unlikely but effective expression in some of the most disturbing scenarios of family conflict. One particularly startling scene depicts a bloody fight between Harold and his two oldest sons. Shot up close and uncomfortably personal through the use of handheld camera, together with a disconcerting, ‘beneath the floor’ camera angle, the scene is rendered in an unconventional, but powerfully visceral fashion.

Mulcahy’s video clip aesthetic is also in evidence in several ‘fantasy’ swimming sequences. Following the most harrowing exchanges between father and son—when Harold has baldly stated he is ashamed of his second son, or is unable to acknowledge his swimming success—Tony is depicted in an ‘out of body’-style scenario. Mulcahy registers Tony’s psychic distress at his father’s rejection by having him float through the hallways of the family home, which then morph into the liberating, blue spaces of the swimming pool.

Mulcahy’s lively direction also makes possible the improbable proposition that the numerous swimming races, which feature consistently throughout the film, remain a forceful and visually appealing element. Using what he describes as a 1960s-inspired split-screen format, Mulcahy combines both swimmers and spectators, underwater and above water perspectives, to sustain the emotional suspense of the competitions (3). Reinhold Heil and Johnny Klimek (responsible for the soundtrack to Mark Romanek’s recently released thriller, One Hour Photo, 2002) provide an effective, techno-inspired soundtrack that enhances the kinetic quality of these racing sequences.

While Mulcahy’s stylistic approach broadens the appeal of Swimming Upstream, the film ultimately depends on the strength of its central, dramatic premise and performances from the cast. A family melodrama which incorporates spousal abuse and fraternal rivalry in addition to the principal father and son conflict, Swimming Upstream is an ambitious and at times confronting film.

Performances are uniformly impressive, with Rush and Davis providing the high profile or marquee appeal. The latter’s lengthy record of playing brittle, feisty and atypical onscreen heroines, makes watching her in an uncharacteristically passive role, a rather disconcerting experience. Rush, who can be an irritatingly mannered actor if not well directed (see The Banger Sisters [Bob Dolman, 2002]) is utterly convincing as the tortured Harold. But the younger members of the cast more than hold their own against their heavyweight counterparts. Jesse Spencer as the adolescent Tony has an impressive range, making his character’s troubled life a consistently moving story.

Tim Draxl and David Hoflin as the older John and Harold Junior respectively also give good support. Holfin has an intense screen presence and makes a vivid impact in his relatively short time on screen, while Deborah Kennedy, as Dora’s supportive friend Billie, turns in her usual solid performance.

Swimming Upstream follows in the footsteps of recent Australian dramas including Mallboy (Vincent Giarrusso, 2000) and Australian Rules (Paul Goldman, 2002), films which also explore the complexities of growing up male in contemporary Australia, and the particular vicissitudes of a destructive father and son relationship.

Australian Rules provides a particularly interesting parallel, given its depiction of a similarly atypical young hero, Blacky (Nathan Phillips), who struggles to establish his individuality in the context of an aggressively macho sporting culture, and a hostile and profoundly unsympathetic father. Where there is no rapprochement between father and son in Goldman’s film, one of the strengths of Fingleton’s script, is that Harold and Tony reach a degree, albeit a conditional one, of understanding by the film’s denouement.

Swimming Upstream is an unusual film in many respects. An expensive production—its $10 million budget makes it the most expensive Australian feature since Moulin Rouge (Baz Luhrmann, 2001)—it is nevertheless a modest but moving story of family dysfunction. Although swimming has been one of the highest profile sports in Australia in recent decades, Mulcahy’s film is arguably the first feature to foreground the sport in any significant way. Combining elements of the sporting, ‘unknown to champion’ narrative (the press kit claims parity with films such as Billy Elliot, Stephen Daldry, 2000 and Chariots of Fire, Hugh Hudson, 1981), coming-of-age story and family melodrama, the film is above all, a tough, uncompromising exploration of Australian masculinity, in its sometimes ugly, but always fascinating complexity (4).