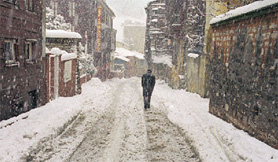 This article was originally published in the Boston Phoenix, June 6 2003.

Eyes roll back home in Boston when I plead my case: that being a journalist in France at the Cannes Film Festival each May isn’t a lark, but gruelling, stressful work. I swear to you, jealous readers, that, placed in my sneakers, you would collapse in exhaustion from 15 days of pushing through the crowds (always the crowds!) in a head-down race to screenings and interviews. The Riviera beach? No critic worth his/her salt has gone swimming in years. Sex under the palm trees? Maybe for starlets and collegiate interns, not for the ever-buzzed, deadline-obsessed fourth estate. May I mention the cruel jet lag, the horrible sleep deprivation? I’m talking, for two weeks straight, of three or four hours per night of anxious slumber. A late-partying critic suffers further fatigue: at 8:30 each morning, you must be inside the Palais Theatre for the sadistically scheduled Competition press screening. Those who are late are locked out. So even the most zealous film buffs find themselves hibernating in their cushy theatre seats, catching 40 winks while a movie rolls on the screen.

Hopefully, snoozing occurs during a not-so-important showing. Alas, not always. This is a circuitous path to a red-faced confession: at Cannes 2003, I was off in the land of Nod for significant portions of the world premiere screening of Gus Van Sant’s Elephant (2003). A few days after, this fictional take on the Columbine High massacre was the surprise winner of Cannes’ Palm D’Or first prize. Did Elephant deserve selection as Best Picture, and should Van Sant have been chosen as Best Director? Or did Steven Soderbergh, Meg Ryan, and the rest of the Competition jury make dreadful decisions? Frustrated readers, I can’t tell you! 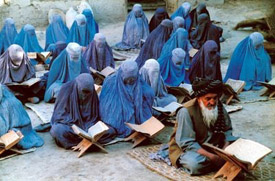 But this jury, headed by French filmmaker, Patrice Chereau, is to be applauded for their intelligence awarding the runner-up Grand Prix to an excellent film from Turkey: critics’ favourite, Uzak (2002), Nuri Bilge Ceylan’s demanding, rewarding tale of alienated city life. Also wisely, the jury bestowed a shared Best Actor prize on Uzak‘s Muzaffer Ozdemir and Mehmet Emin Toprak, portraying estranged cousins who come to share an Istanbul flat. Also fine: the special Jury Award for Samira Makhmalbaf’s At Five in the Afternoon (2003), a tribute to the newly liberated women of Afghanistan.

Most of all, the jury is to be commended for its courage in rejecting altogether for prizes the mean-spirited film predicted by most as the Palm D’Or winner: Dogville (2003), the female-hating, people-loathing, America-despising tome from Breaking the Waves‘ Lars von Trier. Legions of misguided worshippers in Cannes, both on-automatic leftists and auteurist-worshipping Europeans, were shocked and angered when Dogville header Nicole Kidman took no Best Actress, Denmark’s von Trier no Best Director, and Dogville itself no Best Picture. For me: hallelujah!

Von Trier explained to a reporter his perverse inspiration for mounting Dogville:

When I came to Cannes with Dancer in the Dark, I was criticized by some American journalists for making a film about the USA without ever having been there. This provoked me: as far as I can recall, they never went to Casablanca. . . . (S)o I decided then and there I would make more films that take place in America.

Dogville, based on von Trier’s cursory reading of Steinbeck, Twain, and Thornton Wilder, is situated in a mythic hamlet in the Rocky Mountains of the 1930s. Nicole Kidman plays Grace, a moll on the run from gangsters, who is taken in and saved by the Dogville inhabitants. But as the months go by, these do-gooder quiet Americans turn fuckin’ ugly: Grace is imprisoned by them, put in shackles, and becomes Our Town’s sexual slave. Does all of this sound tiringly familiar for those weighed down by von Trier’s absurdly sexist cinema? At the press conference for Dogville, I broke through the adulatory questions and challenged the Danish cineaste: “In three recent films, you have had your female stars, Emily Watson, Björk, and now Nicole Kidman, tortured, raped, imprisoned, chained, murdered, or some variant of the above. Why always are your victims women, women, women?”

“That’s a superficial way to look at the story,” von Trier answered back. “That’s not the way I look at the story. I don’t think it’s important if the victims are men or women. I’m sorry you don’t like it. There are other people who do like it.” And a few minutes later: “I am a victim, the little female within me. When you turn the power toward others, toward yourself, I don’t think it matter whether it’s a man or woman.”

But Lars, Lars, if it doesn’t matter, why not a couple of guys instead of gals strung up and anally attacked? (That’ll be the day!)

As everyone has heard by now, Cannes 2003 was judged on the whole a disaster, with the worst selection of films in decades. In part, Cannes was not at fault, because works by essential filmmakers – Ingmar Bergman, Bernardo Bertolucci, Quentin Tarantino, Jane Campion – were not ready in time and will debut instead at Venice and/or Toronto. But there was little to explain some of the miserable choices for Competition, including Bertrand Blier’s painful farce, Les Côtelettes (2003), which was booed by hundreds of the press, and Vincent Gallo’s self-starring cross-country ego-trip, The Brown Bunny (2003), which was the most joked-about film at Cannes. Cocky and smugly assured before his screening, Gallo was cut down to size by the scornful laughter during the public screening, and the torrent of negative reviews in the English-language press the next day. Nobody could believe that Gallo could squander that much screen time on himself doing practically nothing: shaving, combing his hair, pumping gas, sleeping, driving, driving, driving. And finally, there was the scene for which every dirty-minded person was waiting (count me in): Chloë Sevigny doing a Monica Lewinsky on his erect member. The blowjob was authentic on her part, yet rumours started quickly that what we saw sticking out of Gallo was a large piece of rubber. Apparently, such an object was missing from the set of Claire Denis’ Trouble Every Day (2001), in which Gallo starred.

“I apologize to the financiers of the film but I assure you it was never my intention to make a pretentious film, a self-indulgent film, a useless film, an unengaging film,” Gallo said in Cannes the sombre day after. He added that the fact that some (crazy?) French critics liked The Brown Bunny “is almost like salt in the wound.”

So what was admired at Cannes 2003? Amazingly, this was a Boston year. Three of the most beloved films, all showing for their world premieres, had local hooks. Bright Leaves (2003) from Brookline’s Ross McElwee and The Fog of War: Eleven lessons of Robert S. McNamara (2003) from Cambridge’s Errol Morris are both terrific, extremely impressive feature documentaries by respected veteran filmmakers. The third film, which French and American critics revered a bit more than I did, was the Clint Eastwood-directed, Boston-shot Mystic River (2003), based on Dennis Lehane’s South Boston-set murder thriller.

Having just read Lehane’s skilled potboiler, I was disturbed that certain key scenes were missing which would have motivated the film better. And, oh, those woeful fake Boston accents from many of the out-of-town actors. Eastwood has certainly put together an all-star cast (Sean Penn, Kevin Bacon, and, best, Tim Robbins, as the three friends-from-boyhood leads) and, to his credit, he’s retained Lehane’s creepy ending, more Macbeth than Hollywood. But some of the performances are uncomfortably hammy, and Penn is uncharacteristically unconvincing, Brando-mannered as Jimmy Marcus. I attended a public screening of Bright Leaves, shown in the Directors Fortnight section, and was amazed to hear the bravos and cheers afterward from a predominantly French audience. Obviously, McElwee’s wry, touching, deeply humane road journey through North Carolina struck a nerve with an international crowd, even as it was personal and regional in its scope. And even if, in the land of Galoise, Bright Leaves was, among its many strands, cheerily anti-smoking. McElwee, camera perched on his shoulder, searches through North Carolina for traces of his entrepreneurial ancestry: his great-granddad was a 19th century tobacco baron, the creator of the “Bull Durham” brand.

McElwee is filled with amusing ambivalences. He’s perturbed that great-grandpa today is unfamous, and there’s certainly no family inheritance. Instead it was the competing Duke family, who got the fame and all the money, and a great college too. Why couldn’t it be McElwee University? At the same time, his great-grandfather was a world-class killer in the making, and lots of Bright Leaves consists of camera meetings – some funny, some pensive, some tragic – with North Carolinians touched in some way by the state’s most lethal, but also revenue-producing, product.

McElwee left Cannes with both French distributors and American ones making offers for Bright Leaves. I can understand why: this film is, without feel-good compromises, McElwee’s most glowing and audience-friendly since his 1986 classic, Sherman’s March. 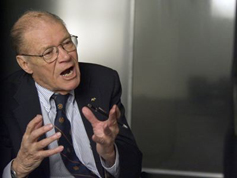 Also, Errol Morris has a certain documentary hit with his dense, sublimely textured, politically significant The Fog of War. Too bad it wasn’t in Cannes Competition. Fog of War conceivably could have taken the Palm D’Or. What we have is a meltdown of 20 hours of on-camera interviews with ex-Secretary of Defense Robert McNamara, vigorous and totally alert at 85, in which he goes back through his notorious history, serving under Kennedy and Johnson while they got more and more stuck in the quagmire of Vietnam. As always in his films, Morris lets the subject weave his own complex narrative, and McNamara’s is an immensely absorbing mixture of evasions and truth-telling, courageous revelations and oily self-deceptions. Even life-long McNamara haters (me among them) need to take pause here and let the old Vietnam hawk have his say, even as he strives to demonstrate that he was really a Vietnam dove. Today? He’s among those warning the globe-strutting USA to stay home. At Cannes, Morris was asked his judgment of McNamara’s “rehabilitation.”

That’s a very difficult question to answer. I chose to make this movie without multiple voices. It’s got McNamara, McNamara, McNamara, and more McNamara. If there are other voices, it’s of McNamara of the past. McNamara at 40 talking to McNamara at 80. He’s the same person, also a different person. How a person is the same and how he has changed, that’s what occupies my movie.