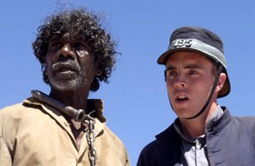 Early in the 20th century, four men are travelling in the Australian outback, over high sandy ridges strewn with gums and mounds of spinfex. They are in pursuit of a fugitive, an Aboriginal man accused of the murder of a white woman. Three of the four are white and on horseback: the Fanatic (Gary Sweet), the Veteran (Grant Page) and the Follower (Damon Gameau). Their Aboriginal offsider, who precedes them on foot, is the Tracker (David Gulpilil).

As their labels suggest, these figures are immediately recognisable types, rather than individuals. The Fanatic, who heads the expedition, is a lean, grizzled martinet who believes in being firm with the natives. The Veteran is an older man, who looks wise but says little. The Follower is a cheerful youth, anxious to do his best. He plays the ukulele, and sings a song, “The Copper’s Lament.”

As for the Tracker himself, he’s a seemingly docile “civilised” black who blithely echoes his companions in their scorn for his race. Like a Shakespearian clown, he plays the fool, cringing and capering in his baggy borrowed clothes. Yet right from the start, there are moments when his mask of deference slips a notch – when his grin stretches a little too wide, or his laughter vibrates for a moment longer than expected.

In some ways, The Tracker resembles a stripped-down Western, with its rugged outdoor setting and focus on primal power struggles between men. Equally, the film is a politically charged fable about colonisation and resistance, pondering the very contemporary question of how far two laws and two systems of belief can exist side by side. But above all, this is a drama of vision, where what each character sees (or fails to see) will determine his destiny.

We might think of the game “Follow The Leader.” As a subordinate member of the party, the Tracker is expected to mimic the attitudes and actions of his masters. Yet it’s not so obvious just who’s following and who’s leading. In theory, the Tracker is a despised servant. In practice, the others must defer to him at every step, since only he can read the traces in the landscape that mark out the fugitive’s trail. By acknowledging their guide’s superior skills, the white men confess their essential weakness: their failure to grasp the reality of the country they purport to rule.

Rolf de Heer is one of the very few auteurs who regularly succeeds in getting features financed in Australia. His earlier work has been uneven, marked by a taste for punitive morality tales, for the abject and grotesque, at worst falling into clumsy sadism. Yet The Tracker (his ninth film) shows that his years of practice have at last paid off, letting him develop a mastery of cinematic language few of his colleagues can match. It also suggests that while de Heer has been identified with “art cinema,” his real gift is for flamboyant, highly personal melodrama, in the vein of Sam Fuller (Run Of The Arrow [1957] or even Cornel Wilde (The Naked Prey [1966]).

The film’s formal system depends in large part on an alternation between multiple points of view, spatial and psychological. De Heer makes classical use of widescreen composition to dramatise the shifting group dynamics, but also regularly employs overt stylistic flourishes at dramatic high points and as plot punctuation. One important recurring device is the bold use of zooms, as when the Tracker’s gaze fixes on an object and seems to penetrate the intervening space like a spear – or, conversely, when the image begins as an extreme long-shot, then zooms out until the figures in the distance are lost to sight, folded into the detail of the immense landscape.

Much as these zooms pull us towards and away from the subject of the image, the film overall solicits a mixture of immediate emotional response and more distanced contemplation. Throughout, de Heer refuses to represent acts of violence directly, replacing them with Aboriginal-influenced, faux-naïf paintings. With characters reduced to anonymous stick figures, the depicted punishments and massacres seem partially detached from their narrative context, like archetypal events repeated throughout Australia’s bloody history. A similarly meditative commentary is supplied by the mournful songs written by de Heer and his regular composer Graham Tardif, and performed on the soundtrack by Aboriginal singer Archie Roach. These contemporary laments, backed by guitar and Hammond organ, create a kind of fourth-dimensional perspective that complicates our response to the linear narrative – an extraordinary effect, like looking down a corridor of time between past and present.

But the film’s greatest asset is David Gulpilil, in perhaps the best role of his long career. If the Tracker is conceived by the script in basically abstract, allegorical terms, Gulpilil’s concrete, humorous performance clearly draws on a lifetime’s experience of navigating between cultures. It’s largely thanks to him that the film pulls off a remarkable balancing act, neither veiling Aboriginal traditions in romantic mystery nor seeking to define their essential truths. To the last, the Tracker remains a protean hybrid, whose thoughts and motivations are knowable only in part. Literally and figuratively, he has the last laugh as he rides off into the sunset – leaving us to wonder what else we might have failed to see.