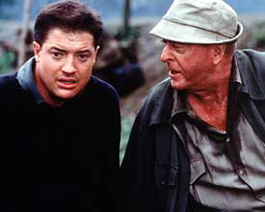 It would be difficult, if not disingenuous, to review The Quiet American (Phillip Noyce, 2002) without first addressing the considerable publicity that has attended the film’s protracted post-production history. Completed in 2001 and slated for release later that year, The Quiet American suffered the fate of many a Hollywood film in the latter half of that eventful year; the film was shelved in the wake of the events of September 11. Based on the Graham Greene novel set in the turbulent decade of 1950s Vietnamese politics preceding full-scale American involvement, Noyce’s film was seen as simply too politically sensitive for the traumatised, post-September 11 cinema-going public.

In both Greene’s novel and Noyce’s film, Alden Pyle, the quiet American of the title, is a duplicitous, ultimately unsympathetic character, who genuinely believes in the ideals of Western democracy but is willing to conspire with brutal and corrupt forces to achieve those democratic ideals. As with the adverse American reception Greene’s 1955 novel received, Miramax studio heads perceived the anti-American critique in Noyce’s film as potential box office death. Positive word of mouth at various festival screenings (most notably the Toronto International Film Festival) and a concerted campaign by lead actor Michael Caine eventually ensured the film’s global theatrical release.

Noyce is the latest in a long line of directors to tackle Graham Greene on the big screen. Regarded as one of the most cinematic writers of his generation, Greene’s extensive on screen oeuvre includes the effectively minimalist minor noir classic This Gun For Hire (Frank Tuttle, 1942), Fritz Lang’s atmospheric Ministry of Fear (Fritz Lang, 1944) and a string of British adaptations of later works, most recently, Neil Jordan’s irritatingly turgid The End of the Affair (Neil Jordan, 1999). While Greene wrote the screenplay for Carol Reed’s much venerated The Third Man (Carol Reed, 1949), he was rarely involved in adapting his work for the screen and his contempt for most of the film versions of his novels is well documented.

Most famously, Joseph Mankiewicz’s earlier interpretation of The Quiet American (Joseph Mankiewicz, 1958) earned Greene’s abiding opprobrium. Shot on location in Saigon and produced within a few years of the novel’s publication, Mankiewicz’s script, amongst other changes, significantly diminished the culpability of the eponymous American of the title, thereby undermining Greene’s trenchant political critique.

It would be interesting to speculate on Greene’s response to the most recent adaptation of his work. While scriptwriters Christopher Hampton and Robert Schenkkan have remained relatively faithful to the thematic fundamentals of Greene’s novel, Noyce’s version of The Quiet American is a disappointingly prosaic affair. The film’s coda also effects a muted disclaimer of sorts, one that would arguably have reinforced Greene’s misgivings about the misappropriation of his work for the screen.

Set in Saigon in 1952, The Quiet American was inspired by Greene’s experiences as a journalist in Indochina, drawing on a series of actual individuals and events. In Noyce’s film, Michael Caine plays the aging, indolent British journalist Thomas Fowler. By his own admission, Fowler has been happy to ‘hide behind the typewriter’. Filing off the occasional story in desultory fashion, Fowler has remained largely detached from the domestic political situation he is supposedly covering. His Saigon posting has afforded a comfortable ex-pat lifestyle, complete with beautiful young Vietnamese mistress Phoung (Do Thi Hai Yen).

When idealistic American medical aid worker Alden Pyle (Brendan Fraser) arrives in Saigon, Fowler’s personal and professional complacency is challenged. Eager for information on the troubled political situation, Pyle ingratiates himself with Fowler and with disconcerting alacrity, falls in love with Phoung. The increasingly strained romantic triangle that develops is played out against the backdrop of an equally tense political situation, where French, American and Vietnamese forces struggle for control of the country.

Noyce’s film employs the retrospectivity and first person narration of Greene’s novel. From the outset, the drama is presented from Fowler’s jaundiced point of view. His weary voice-over, together with the flashback structure and Greene’s enduring interest in morally ambiguous characters, suggests a certain affinity with the formal and thematic elements of the classic film noir canon. Regrettably, while deploying aspects of the noir vernacular, The Quiet American lacks the tension or suspense characteristic of the form.

Noyce’s film has a conventional, even old-fashioned feel to it. While clearly committed to a faithful translation of Greene’s novel, it feels as if the director is nevertheless treading lightly, if not warily with the material. While 1950s Vietnam, particularly Saigon, is convincingly rendered—more of the cinematography later—the central relationships and various subplots of political intrigue are dealt with less persuasively.

The classic romantic triangle at the centre of the story has an air of utter predictability about it. The competition between an older and younger man for the affections of a beautiful young woman is hardly an original dramatic proposition, but in The Quiet American, the relationship is depicted in an uninspired, almost perfunctory fashion. Phoung is a poorly defined character, a compendium of middle-aged male fantasies—in equal parts the enigmatic Asian temptress, and subservient but opportunistic subordinate whose affections can be readily bought. As Phoung, Do Thi Hai Yen (recently seen in Tran Anh Hung’s The Vertical Ray of the Sun, 2001) is not given much to do, other than look winsome in a series of increasingly elaborate costumes.

The rivalry between Fowler and Pyle is also unconvincing. While performances from both Caine and Fraser are impressive, their on screen rivalry is conducted with such an air of gentlemanly restraint, that it is hard to believe that genuine passion motivates either man. While this may well be an accurate reflection of the pervasive mood of ennui in Greene’s novel, Noyce nevertheless fails to enliven the relationship between the two men or actively engage audience sympathies for their respective dilemmas. It is only when the increasingly morally suspect Pyle follows Fowler out of Saigon and onto the North Vietnamese battlefield that the relationship is invested with some degree of tension.

Even here, in the various scenes of combat as the North Vietnamese wage a guerrilla war against retreating French forces, Noyce’s direction feels somehow pedestrian. Given the rash of graphic, hyper-realistic and even lyrical depictions of the theatre of war in recent years, (Saving Private Ryan, Steven Spielberg, 1998 and Terence Malick’s sublime The Thin Red Line, 1998), the scenes of military action in The Quiet American feel overly constrained, bordering on contrived.

While comparisons have been made, for self-evident reasons, between Noyce’s The Quiet American and Apocalypse Now (Francis Ford Coppola, 1979), Peter Weir’s The Year of Living Dangerously (Peter Weir, 1983) provides a more instructive contrast. Weir’s film, also adapted from a novel, has a similar structural and thematic mix—Western journalists covering an incendiary political situation in a southeast Asian setting, the action complicated by a romantic triangle of sorts.

But Weir’s film has precisely the inventive, suspenseful blend of political intrigue and romance that is singularly lacking in The Quiet American. In The Year of Living Dangerously, the fall of the Sukarno regime does not merely provide an exotic backdrop for the romance between fellow journalists but is a vividly rendered portrait of escalating political tensions. Noyce’s film seems almost genteel by comparison, unable to invest either the romantic triangle or the Vietnamese conflict with the adrenalin rush that made Weir’s film such an genuinely exciting experience.

This review began with a discussion of the political ramifications around the release of The Quiet American and it is therefore fitting to conclude with some observations about the film’s rather politically ambivalent denouement. Where Greene’s novel maintained Pyle’s ultimate culpability and Mankiewicz’s film undermined it, Noyce’s version has it each way. Pyle meets a violent and undignified end as a result of his shady CIA dealings with various anti-Communist Vietnamese forces. Yet Noyce elects to close with a montage of Fowler’s dispatches over the succeeding decade, accompanied by images of US troops in action. The final image is a poignant still of an injured American soldier.

It is an interesting and also puzzling choice, one which seems to ultimately valorise American involvement in the Vietnamese conflict and obliquely mitigate the actions of Pyle, the film’s symbolic American figure. One wonders whether this was always the ending Noyce had intended or whether it was a pragmatic, post-September 11 choice that studio, director and audiences alike, could live with.