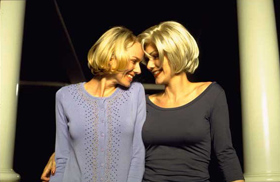 During a recent film radio show, a well-known local film commentator threw to his listeners an intriguing, provocative question: how on earth did David Lynch convince a bunch of hard-nosed business folk – who care nothing for film as art – to invest millions of their dollars into a film that ruthlessly goes against the tide of conventional narrative? That denies what mainstream audiences expect and even pay for – the narrative pay-off, the final tying up of loose ends, the final resolution of all anxiety and uncertainty. This is a tough question; on one level, it can be easily tackled, on another, like a key moment in Mulholland Drive itself, it opens a Pandora’s box.

The very fact that a certain segment of the radio show was solely devoted to listeners calling in to give their interpretation of the narrative in Mulholland Drive testifies to this films’ ability to engage an audience precisely through withholding narrative information and triggering a desire for narrative closure and meaning. Lynch’s genius is in his ability to create a universe where the landscape of objects, characters, situations and mood all seem perfectly right and credible but where their locking together in any conventionally meaningful or logical manner remains just beyond reach. But we all know to expect this from Lynch and I’m not about to present my pet theory for the events in Mulholland Drive, however, I do agree with Irish writer and filmmaker Maximilian Le Cain in this issue that this film is about severely fractured identity and extreme psychological states, and that the degree to which identity can be so badly wrought reveals the degree to which there once lingered a deep yearning for love, innocence, hope, expectations …

Lynch’s film deeply moves me, and I’m sure many others, and it surely doesn’t have to be a conventional narrative to do so. The frightening part of the radio presenter’s question was the implication that art should have any financial return, or worse still, that its very existence should be decided by such considerations. We all know that the raison d’être for the realms of art and commerce are, at bottom, incommensurable. How can I put a dollar figure on my feelings and thoughts that arise after I have seen and mulled over Mulholland Drive or Waking Life for that matter? Just like the sudden spark that another person can make you feel, so the kinds of reactions which cinema-going evokes are no less then shades of love. And it’s not just film but a whole range of activities that are perpetually locked in combat with economic rationalist policies: film culture and film criticism, higher education, and so on. Though it’s difficult to estimate their economic value, these activities are vital and essential.

Since day one, Senses of Cinema has grown and – much like the tree trunk from Little Otik – has become a demanding, all-consuming force. Every effort gone into its various aspects has been in the name of cinema and for cultural rather then economic benefit, and often with little or no financial reward. It’s for all these reasons that we are extremely grateful to George Miller (director and producer of one of Australia’s most visionary and dynamic films, Mad Max) who last year recognised and acknowledged Senses of Cinema by awarding it runner-up of the Byron Kennedy Award and donating a handsome prize.

In terms of vital and essential things … you can judge for yourself whether you view this issue’s contents in such a light. As editorials are prone to divulge, this issue – as each issue often does – came together haphazardly and via a long line of chance events. However, the main categories according to which the material gathered could be assembled were primarily director-based. From David Lynch to Len Lye, Bruno Dumont to Joseph von Sternberg, Michael Mann to Philippe Garrel, Chuck Jones to the Quay Bros., if there’s one thing this issue confirms it’s the validity of the auteur theory. And don’t worry, the special women’s issue scheduled for Sept-Oct will rectify once and for all this male-heavy list! For even the semi-literate filmgoer, to say a director’s name is to evoke a string of associations – stylistic and thematic. And so someone as unconventional as David Lynch is able to make a million-dollar film because he’s a recognisable, familiar concept.

Moving from film directors to film criticism, the range on offer in this issue is wide. We have cause to celebrate American writer, Donald Phelps, who in the tradition of Manny Farber, deploys a style of writing that invents its own rules along the way, that collapses any distance with the object under analysis to become infected with its flavour, feeling and beat. Meaghan Morris performs a superb cultural reading of Australian contemporary cinema in her essay “Fate and the Family Sedan”, in particular, the nagging presence of “inward” male types, the eradication of difference and the absence of romantic or positive representations of the nuclear family. Her drawing attention to the Car as a metaphor of subjectivity and even agency in Australian cinema is fascinating. For Morris, Mad Max provides a singular case, since here is a film dominated by a strange almost frightening kind of realism where it’s as though anything could happen (and it does, for example, the profane sequence whereby a mother and child are rendered totally vulnerable before a bunch of brutal, crazed bikies). The strange, eerie, even radical vision of this film extends to the central character-hero, Max, who freely moves into unknown zones, adapting to each new, changing and demanding environment.

It is possible to view the “inwardness” of many Australian narratives and characters as a displacement of anxieties and fears related to Australia’s identity, sense of history and geography. Current events disturbingly reinstate Australia’s will to isolation and protection from anything unknown or different. And the most popular Australian film for last year, both commercially (it’s still playing) and even critically, Lantana, set forth a wholly prescribed almost academic notion of difference (a cross-section of society that ranged from middle to lower class; professional to working class; Anglo to ethnic). Despite the film’s attempts to take its characters seriously, to unravel their complexity, what it is that stirs them, that leads them astray, this intended openness (novel for an Australian film granted) was ultimately subverted by reflex common assumptions about contemporary existence and bourgeois-sentimental values. In the end, there proved to be no escape for any of these characters from an all-consuming malaise; difference became homogeneity, any real questioning of the order of things either reinstated the ‘same’ or was in vain.

However, with all that happens in cinema and culture, politics and economics, there is always the possibility of response and change. Recent Australian films One Night the Moon and Rabbit-Proof Fence, both discussed in this issue, engage with and rewrite Australia’s colonial history to incorporate indigenous voices and perspectives. And while I write this, I am simultaneously flicking between American President Bush’s speech about America’s values of freedom and democracy, on the occasion of the 6-month anniversary of September 11, and a documentary about attitudes towards America in Egypt and Iraq.

Leaving all this behind, and looking ahead … here’s to 2002. And hope you enjoy the issue!