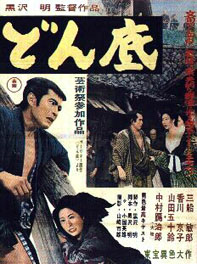 As a young man in the 1920s, Akira Kurosawa frequented the little Tsukiji Theatre in Tokyo. This experimental modern theatre, inspired by the performance techniques and production methods of Stanislavsky and Meyerhold at the Moscow Art Theatre and Max Reinhardt at the Deutsches Theater, included in its repertoire Gorky’s The Lower Depths, along with works by Ibsen and Chekhov. According to James Goodwin, the dramaturgy and set design of Kurosawa’s film closely resemble those of the Tsukiji production of the play (1).

Kurosawa underlines the theatrical origins of his film in several ways. He opens and closes the film with percussive musical notes, as is traditional for Japanese stage presentations. The action and dialogue of the original play are followed much more faithfully than they were in Throne of Blood, the adaptation of Macbeth he made earlier in the same year; and – apart from the opening shot – he confines himself to the two sets (inside and outside the dilapidated tenement house) of the stage play. The film even retains the play’s four-act structure with fade-outs used prominently (because not otherwise used) to mark the end of each act. Though the cast features two famous film stars (Toshiro Mifune and Isuzu Yamada) and one star comedian (Bokuzen Hidari), the film has no star or stars; like the play, it is an exemplary ensemble performance piece. In fact, it was the lesser known actor, Koji Mitsui, who won two Japanese awards for best supporting actor that year for his performance as the Gambler, the role played by Stanislavsky in the original Moscow Art Theatre production of the play. Other noteworthy theatrical elements include the alcoholic Actor’s performance of a theatrical monologue, the final festive song-and-dance of the surviving tenement inmates and the Gambler’s devastating aside to the audience at the end of the film. In addition, characters within the film are often situated as an overt or hidden audience for the performances of other characters.

But while it is a very theatrical film, The Lower Depths is also very much a Kurosawa film in its dynamic use of cinematography and editing. Within the confined indoor set, the camera set-ups and positions constantly shift. Absent characters are suddenly exposed as present, listening or prying. An intimate dialogue between two characters filmed in two-shot will be followed by a shot from further back that exposes another character seated in the foreground, or abruptly shift to a wide shot, revealing an unexpected arrival or intrusion. A wide shot of a group in conversation will suddenly jump to a close-up of one character. The camera position will also jump from a frontal to back view of a character while he or she continues talking. In addition, Kurosawa makes repeated use of editing within the shot, notably when a previously unseen character unexpectedly emerges from behind a curtain or out of the bedcovers and into the frame.

The brutal editing (so called by Noël Burch (2)) accords with the brutal lives of the characters in the film, and helps to underline their lack of privacy, their confinement, their unstable and unhealthy situation. The only ways out of the hell-hole that is their abode are death (by illness, murder or suicide) or crime (which leads to further confinement, in prison). The major avenues of escape from the brutal reality of their lives are alcohol, entertainment and the cultivation of fantasies and illusions. Their illusions are fostered by the visiting priest, who is compassionate and sees they need them to make their lives bearable, and punctured by the cynical Gambler, who refuses compassion, is scornful of their illusions and alone faces the truth. The hopes of the deluded are dashed and the do-gooding visitor makes a fast and clandestine exit when his encouragement produces dire results, suggesting that compassion is not enough. On the other hand, the truth of the Gambler is too bitter to tolerate. As in Dodes’ka-den (1970), Kurosawa’s other major film focusing on the down-and-out, the rejects of society, we are shown that people need dreams and illusions to keep on living; facing brutal reality is not enough – or too much to tolerate. In the case of the later film, the painterly use of colour and heavy doses of sentiment sugar-coat the message; in the case of The Lower Depths, squalor, poverty and disease are not aestheticised, but grimly and brutally portrayed. At the same time, life in the lower depths is shown as not so grim, so long as its residents can drink, joke, sing and dance.

Both Donald Richie and James Goodwin have found The Lower Depths similar to Sadao Yamanaka’s 1937 film, Humanity and Paper Balloons (3). It is true that there are similarities in their social milieu and in their sympathy for the losers and rejects of society, but there is a crucial difference: Yamanaka’s film damns the social system and the privileged classes in particular, for their lack of compassion and failure to meet obligations, while Kurosawa’s film is less concerned with the abuses and injustices of the social system than with existential issues.

Made when Kurosawa was at the height of his powers, this film is a brilliant filmic adaptation of a famous play. The virtuosic maestro constantly re-configures the limited space of a stage setting and, in the process, keeps on surprising if not shocking us. Dynamic editing is common enough in the action cinema but is usually designed to foster narrative suspense and enhance bravura action; here the dynamic editing is neither suspenseful nor bravura but brutally jagged, enhancing the existential melodrama of the narrative. The cast were enabled to produce a flawless ensemble performance as a result of a very long period of rehearsal (60 days, according to Yamada) on the set in costume, before filming began.