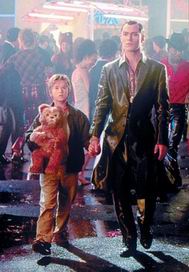 Well, it’s hard to believe yet another year has just passed. Banal observations aside, it seems that the more technologically advanced Western society becomes, the faster the pace of everyday life: greater amounts of information, faster speed at which it is delivered, greater urgency to be up with the latest, to see and read it all. And to what costs? The possibilities presented by the Internet and DVD players alone are awesome, unimaginable. Some of this is good: a DVD player literally allows you to run your own Cinémathèque in the comfort of your living room. And despite the somewhat atomising effect that such technology can have, it also facilitates communities, bonds, forums, and exchanges – of a global nature. And this is exactly where Senses of Cinema falls. As a journal committed to the serious, passionate and eclectic discussion of film – that is, films of any genre, from all parts of the globe and, importantly, from the vastness of film history – Senses of Cinema has grown in ways unimagined primarily through the sustained support and interest of the international film community.

If there was an event that paused or jolted the frenzy of everyday life in Western societies, no doubt it was the fateful day of September 11. A day which for many not only outstripped the faculty of language – over and over, its events were evoked as “indescribable” – but also caused a shift of perspective, a sudden re-evaluation for many in the business of film criticism: what was the importance of movies and, even still, writing about them, in these times? Well there’s no doubt that movies open up realms of feeling, understanding and dreaming for all of us that we would never want to deny or prohibit. What should be taken from the events of September 11 is greater sensitivity: to life in general.

Judging by the 2001 Favourites lists in this issue, cinema in 2001 – which of course means different things to different people – was a full and rewarding one. Many of the titles to appear on these lists – What Time Is it There?, Mulholland Drive, Ghost World, Waking Life, Kandahar, Time Out, Éloge de l’amour – I have yet to see. Nor the films of Pedro Costa. Perhaps one key film for 2001 and the height of American cinema this year was A.I.: Artificial Intelligence – such an intense and haunting film whose moving story was hardly “human” in any way: a robot striving to be real, and to love. It was precisely this theme of the singular importance of maternal love as defining and allowing one’s humanity and the overriding importance of love and acknowledgment itself that can be seen as an indirect comment on the materialism that drives Western contemporary society.

Besides the round up of critics, programmers and film lover’s commentary on their favourites for 2001, this issue includes a substantial collection of essays on Film and the Other Arts. Many thanks to Adrian Martin for his key role in shaping this dossier, which is in a way an introduction to the vastness of this field of work. Although cinema plays a key role in our lives, it’s also an art form inevitably entangled with other art forms: from literature to painting to dance and radio, and some of the richest understandings of a film can derive from appreciating these entanglements and relations. And in an essay in this section that acts as a perfect counterpoint to my contention of feelings of loss in a technological-world is Darren Tofts’ excellent reflection on the poetics of dislocation that cyberculture proffers.

In this year of great tragedy, the conservative route taken by the Australian government toward cultural differences and border transgression makes Meaghan Morris’ remarkable essay even more relevant and indispensable today than it was when it originally appeared in 1998. On the lighter side of things, Maximilian Le Cain’s essay on Visconti is an intriguing reappraisal of this often overlooked Italian neo-realist filmmaker. And Shelly Kraicer’s interview with Johnnie To and Wai Ka-fai reveals the constant struggle filmmakers face in making films for themselves and those for the marketplace. And there is more: Stephen Teo discusses the success and unique quality of the Pusan International Film Festival, Walerian Borowczyk is brought to the light in the returned section of Overlooked and Underrated, Steve Erickson interviews Jim Hoberman, and much more.

Thanks to all the contributors to this issue and to Mairead Phillips for her indispensable editorial assistance and Janet Bergstrom for coming to the rescue with a much needed still.

I am glad to report Senses of Cinema will be back in 2002 for yet another year of commentary on films from the present and the past. There is an issue due to be released in early March. I am also glad to report that Senses of Cinema continues to fulfil its original aims as a cinephile magazine dedicated to the serious discussion of film and to offering readers an alternative to consumerist and exclusively academic publications.

I would like to thank every single writer who contributed this year. The journal would not be much without its writers: so thankyou to you all. And a big thankyou to the various individuals who assist in shaping Senses of Cinema: Bill Mousoulis, Albert Fung, Grant McDonald and Mairead Phillips. And I would also like to thank two very important people whose commitment – sometimes at a personal cost – to Senses of Cinema this year was not only invaluable in ensuring the journal’s existence but also its continued growth and appealing design – these are, Chris Howard and Adrian Martin.

Thanks for reading Senses of Cinema, which is now 2 years old, and here’s to film in 2002!