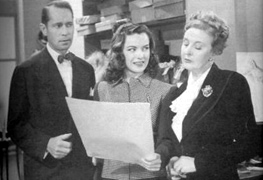 Readers please note: the first paragraph of this annotation gives away the film’s story.

Phantom Lady (1944) is one of the high points of ’40s film noir, the title alone evoking a potent mythology of this era. At the center of its narrative is the seemingly hopeless search for the title character who potentially serves as the only reliable witness in the murder trial for Scott Henderson (Alan Curtis), falsely accused of killing his wife. But the search is frustrated by Henderson’s inability to remember any details about the woman outside of a flamboyant hat she wore during the night they spent together, an unlikely memory lapse that only intensifies his apparent guilt. Furthermore, no one else who saw Henderson and the woman together will admit to the police that they had seen her. It is up to his assistant, Carol (Ella Raines), to initiate an investigation of her own. This implausible journey takes her on a tour of a decaying 1940s New York, during which Carol undergoes some implausible transformations of her own before the true murderer is revealed: in a complicated twist, Henderson’s close friend, Marlowe (Franchot Tone), performed the deed.

Perhaps what is most interesting about Phantom Lady is its relationship to a strain of ’40s cinema in which traditional narrative logic is subservient to a primarily poetic or lyrical approach. In this regard, the film is not simply of its moment but also anticipates certain aspects of post-war modernist cinema, in particular narratives revolving around the search for an elusive figure who may be alive or dead and who may have existed in reality or be a figment of someone’s imagination. Here we find narratives built less around traditional cause-and-effect, character driven investigations than narratives dominated by an obsessive form of stalking and trailing (see, for example the work of Antonioni, Resnais, Duras and Robbe-Grillet). Two creative figures behind Phantom Lady are central here: its director, Robert Siodmak, and the author of the novel upon which the film was based, Cornell Woolrich.

Woolrich’s crime novels consistently challenge the fetish for plausibility and pull us into a nightmarish world which follows its own internal drives, with the protagonists at the mercy of irrational forces. The construction of a Woolrich novel constitutes a ruin of classical detective fiction in which traditional explanations and resolutions are offered but almost invariably seem insufficient in relation to what has preceded it. Furthermore, the appeal of the novels has to do not simply with their intoxicating illogic but also their phenomenological detail and descriptions of urban spaces in a state of sweltering decay. Siodmak is an ideal candidate for this kind of story material and Phantom Lady is the film that established his Hollywood reputation. His origins in Weimar cinema (and the six years after this spent in France) allowed him to develop his superb and sensuously textured attention to details in mise en scène. But it also allowed him to absorb certain lessons from Expressionist and Surrealist cinema. Specifically, we see an approach to filmmaking concerned less with creating a fluid and organic environment than with one that obeys a poetic logic of its own. In this regard, the urban spaces of Phantom Lady resemble both the claustrophobic Weimar street film and the seductively decaying urban space of chance encounters beloved by the Surrealists. (Henderson’s meeting with the phantom lady suggests a fumbled version of this type of encounter.) In Siodmak, the characters are torn between irrational, repressive social forces and their own strong physical and romantic desires which pose a threat to that social order. In one of the major set pieces of the film, Carol attempts to stare down a bartender who refuses to remember seeing the ‘phantom lady’ and then stalks him through wet, humid streets and an elevated railway station. But nothing we see of Carol prior to this could prepare us for the shift from the modern working woman we see early in the film to this Medusa (Woolrich employs the name directly), as immobile as a statue sitting at the bar, vengefully attempting to break down this man through the sheer power of her gaze. Carol’s transformation here (as well as in the second set piece, when she becomes a sluttish hep-cat, attempting to seduce a drummer in the midst of a frenzied, erotic jam session) makes little conventional psychological sense. However, her function in the film is almost entirely symbolic, by turns Henderson’s gal Friday, a fairy tale princess (Henderson’s nickname for her, Kansas, suggests that her story may be read as a variation on The Wizard of Oz in which Carol undergoes a form of fairy-tale descent marked by bizarre metamorphoses) and a Surrealist heroine, mysteriously wandering city streets, alternately still and sensuously mobile, and disregarding any kind of logic outside of those of her own desires. But these transformations (and the bartender sequence as a whole) tap into something else.

Woolrich’s work often revolves around the problematic nature of memory, most often in relation to a crime which the protagonist may have committed but which their faulty memories (often aggravated by extreme trauma) cause them to either forget or be uncertain about. However, Henderson’s memory lapse is brought on by simple distraction – his anger at his wife precipitating his difficulty in fastening onto details about the ‘phantom lady.’ This is counterpointed with the unshakable certainty of the witnesses who claim never to have seen her. What, then, does Carol hope to achieve through this stare of hers except to force a memory out of a man who otherwise claims to have no memory for faces, a failure which he attributes solely to the distractions of his profession and which he finally dies for – running in front of a car – rather than confess? The all-powerful male gaze of such archetypal Weimar figures as Nosferatu and Mabuse is here passed on to a protagonist whose concerns could not be more different. In a brilliant reversal of the gender conventions of material of this nature, it is the woman who does the stalking and it is the woman who possesses the most powerful gaze of them all. But this gaze is not one that she possesses in monstrous terms but in order to uncover the truth and bring a memory into the light of day, as though Poe’s Ligeia and Lang’s Mabuse had been crossed with Hildy in Hawks’ His Girl Friday (1940).

While the film retains the novel’s lackluster pickup between Henderson and the ‘phantom lady,’ it adds details strengthening the theme of memory. The ‘phantom lady’ is more melancholic than in the novel and when we first see her in the bar she is playing an instrumental version of “I’ll Remember April” on the jukebox, a song whose lyrics (which we don’t ever hear in the film) testify to the gentle appeal of remembrance: “The fire will dwindle into glowing ashes/For flames of love will live such a little while/I won’t forget but I won’t be lonely/I’ll remember April and I’ll smile.” Throughout the opening, Terry perpetually stares off into space, scarcely making eye contact with Henderson. Henderson attempts to focus that stare onto something specific, drawing her attention to the “typical New York face” of the cab driver and asking Terry if she ever walks down New York streets and looks into people’s faces. Not until they attend the Brazilian revue, where the singer onstage is wearing the same hat as Terry and the two women lock malevolent glances at one another, is this vagueness of Terry’s look temporarily broken. The significance of “I’ll Remember April” and of the ‘phantom lady’s’ behavior is not clarified until near the end of the film. Carol tracks her down (real name: Ann Terry) and finds that the woman has suffered a nervous breakdown brought on by the sudden death of her fiancée the previous April. Terry’s paralysis is the result of the traumatic memory of the revelation of this death. If memories hold too little for Henderson they hold too much for Terry. But in either case, they are typical of a certain type of protagonist for Woolrich and Siodmak, masochistically accepting their fates rather than fighting against them, neither of them able to consistently look at or focus on anything. In a New York marked by individuals who seldom make eye contact or look for very long at anything, Carol’s relentless stare in the bar becomes the nightmarish reversal of the anonymity and averted glances of urban living.

Almost everyone who sees Phantom Lady expresses disappointment with its second half in which (in a departure from the structure of the novel) Marlowe is too quickly revealed to be the murderer and turns out to be a Nietzschean paranoiac madman besides. This structural and stylistic lapse is symptomatic of little more than two undigested side-by-side influences: Hitchcockian suspense (in which the spectator is given more information about the circumstances of a crime than the protagonists in order to increase emotional involvement on the part of the spectator) and Expressionist cinema. With Marlowe’s shadow looming over his victims, it is now he and not Carol who becomes a cross between Nosferatu and Mabuse, complete with over-the-top facial and hand contortions awkwardly imposed on an actor who could not be more American and less comfortable with this type of gestural repertoire. It is also in the second half of Phantom Lady that the film attempts to recuperate itself, to offer explanations and reassuringly resolve its issues. That it does not completely succeed in this regard suggests that the heart of the film lies elsewhere, on that deserted elevated train platform with Carol and the bartender, and in the various other detours the film has taken prior to this.