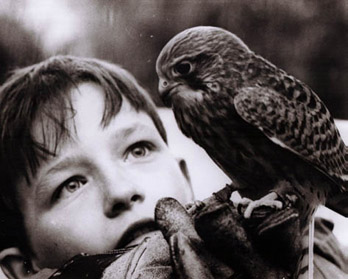 Ranked seventh in the BFI 100’s recent selection of the favourite British films of the 20th century, Kes remains Ken Loach’s masterpiece (1). While the director has reached similar aesthetic heights in subsequent years (Days of Hope [1975] and Raining Stones [1993] immediately spring to mind), the film remains a template for Loach’s abiding concerns: the struggle of the British working class to achieve life’s basic needs, dramatised through the plight of an individual character; the significant impact of public institutions upon personal lives; sensitive performances with an ear for regional dialects; and an unobtrusive yet evocative visual style that illuminates character and place in a naturalistic fashion. Arriving as the ’60s drew to a close, Kes heralds the end of “kitchen sink realism” and the true arrival of one of contemporary cinema’s major artists.

Loach began his directorial career at the BBC in 1963 where he met story-editor turned producer Tony Garnett (2). Committed socialists, the pair collaborated on a series of stylistically ambitious films that addressed Britain’s social problems, including homelessness, teenage delinquency, union politics and abortion (3). Their success led to Poor Cow (1968), a flawed commercial production that wears its Godardian and Brechtian influences too readily on its sleeve (4). Frustrated by the BBC and Hollywood bureaucracies, Loach and Garnett created their own production company in order to make Kes. They shot the film on location in eight weeks for just £157,000 (5).

Kes details the life of Billy Casper (David Bradley), a lonely teen facing a bleak future in a Yorkshire mining town. An outcast at school, Billy’s slight frame and unkempt appearance make him an easy target for teachers and bullies alike. Unfortunately, home provides no respite. Billy’s father is absent, his inattentive mother (Lynne Perrie) offers little guidance or love (referring to Billy as “a hopeless case”), and his abusive older brother Jud (Freddie Fletcher) takes out his hostility through punches and insults. However, hope appears in the form of a kestrel, which Billy captures as a fledgling and trains to fly on command. Soon, the bird reveals not only Billy’s untapped potential, but also his desire to escape his toxic environment. It’s no accident, of course, that Billy is obsessed with the only bird owned by the lowest social orders during medieval times. As Loach notes, “It’s a bird for the riff-raff of the world.” (6)

Faithfully adapted from the Barry Hines novel A Kestrel for a Knave, Kes carefully exposes the links between economic opportunity, social services, and personal fulfillment. Public institutions, in Loach’s view, carry an obligation to provide proper employment and housing to its people – without a job or home, one cannot feel safe or secure, much less happy. While public education aims to inspire children and equip them with the intellectual tools necessary for adulthood, Billy’s school repeatedly fails him. Headmaster Gryce (Bob Bowes) canes Billy and several other boys “knowing fully well that you’ll be back for it time and time and time again.” Billy’s buffoonish P.E. instructor (Brian Glover) humiliates the boy for lacking a gym uniform, and then forces him to withstand an ice-cold shower. Most appallingly, a youth employment officer (Bernard Atha) casually identifies Billy as best suited for “manual labor” and suggests trade school or a future as a miner. Billy emphatically protests, “I’m not going down in the pit”, recognizing the horrible hand already dealt to his older brother.

Jud’s dreary and dangerous job, in fact, inspires the hostility toward Billy and his mother. A lengthy sequence depicts Jud’s walk to work and the elaborate, claustrophobic journey he and his colleagues must make daily into the pit. Before going down, another miner notices Jud’s poor mood and explains, “Should be on top of the world on a day like today.” Jud replies, “In about ten minutes, we’ll be on the bottom of it.” To Loach’s great credit, the sequence humanises Jud, while also providing a portentous view of things-to-come for Billy. As Jacob Leigh points out, “Kes protests against an educational system which fails to recognize individual talent, and it suggests that this is a consequence of a capitalist society which demands a steady supply of unskilled manual labour.” (7) Jud’s dismal situation illustrates the vital importance of opportunity to a young person and much of Kes‘ narrative drive rests on the question of whether Billy will be similarly wasted.

The film’s centerpiece offers a degree of hope. Encouraged by Mr. Farthing (Colin Welland), the school’s lone compassionate teacher, Billy describes to his class how he captured and trained the kestrel. Displaying an unexpected enthusiasm, he slowly opens up and offers great detail about flying the bird off-leash for the first time. It’s the type of sequence in which Loach demonstrates his prodigious directorial skills. Billy’s story begins in long shot with the boy slumped against his desk in the lower part of the frame. As Billy gains authority and presence throughout the tale, Loach cuts back and forth between the boy, Mr. Farthing, and the interested class. Each time Loach returns to Billy, he is framed tighter and the sequence ends with Billy in one of the film’s few close-ups. Without being diagrammatic, the boy’s rising enthusiasm compels Loach to move the camera progressively closer in a beautiful integration of form and content.

With the exception of Colin Welland, the entire cast features non-professionals discovered in Barnsley, including the remarkable David Bradley (8). Like Loach’s subsequent films, Kes preserves the accents and colloquialisms of northern England in the film’s dialogue, adding an authenticity absent from most commercial British productions. Bradley’s alternately emotional and reserved performance surely ranks as one of the great adolescent portraits in cinema, joining the likes of Jean-Pierre Leaud in The 400 Blows (François Truffaut, 1959). As Loach says, “In fact, David Bradley… proved the film’s central thesis by his performance; namely, there’s a lot of ability that nobody knows about and that just gets written off.” (9)

Despite truly bleak moments and an ambiguous finale, Loach infuses the film with enough warmth and humor to carry its audience along. Like Antoine Doinel, Billy has a penchant for daydreaming, insubordination, and petty theft (he steals a book on falconry after a public library refuses to lend him one) which contributes to his plight, if only in minor ways. When he steals a pint of milk and then stops to joke with the milkman, he displays a swagger recognisable in teens everywhere. Loach’s attention to detail consistently reveals aspects of daily life rarely featured on film. For example, few who see Kes ever forget Mr. Sugden’s introduction on the football field. Practicing various head butts to the tune of BBC’s Sports Night theme, the P.E. teacher humorously represents every awful failed athlete-turned-educator.

An unexpected success on its initial release (the film made its money back in the UK alone), Kes continues to resonate with contemporary audiences. On a 1999 return visit to Barnsley, six different fans stopped David Bradley in one day about the film (10). Critics rightly heralded its 30th anniversary re-release as a major event. Most significantly, Kes introduced Loach to the international film scene, a platform from which he has consistently challenged and provoked audiences ever since.