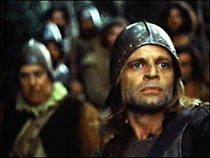 Werner Herzog was born on 5th of September 1942 in Munich as Werner Stipetić (1), son of a Croatian father and a German mother. Though he chose to call himself “Herzog” a long time ago, the name “Stipeti” appears frequently in the credits of his earlier films. Though Herzog studied history, literature and theatre in Munich and Pittsburgh, USA, he gave up his studies early, and turned to filmmaking in 1962. In 1974 he walked all the way from Munich to Paris to visit the seriously ill film historian Lotte Eisner, believing she would not die if he achieved this pilgrimage. In 1983 he played the father in Paul Cox’s Man of Flowers (1983). Herzog states that his soul feels nearest to the late Middle Ages and that he would dare to re-do Hamlet after Shakespeare.

His films are archetypically German in their quest for the Holy Grail or rather the Blue Flower of Romanticism, to name the nearest German equivalent. No aim is weird enough, no country too distant: El Dorado in the Peruvian jungle (Aguirre, 1972); an opera-house in the Brazilian jungle (or in this case rather the moving of a ship across a mountain) (Fitzcarraldo, 1981); an empire of black Amazons in West Africa (Cobra Verde, 1987). And if possible, mythology is added – to a point where myth is simply created. This is not only true of the ill-fated Where the Green Ants Dream (1984) but of the Sahara doco Fata Morgana (1970) as well, where myths by the ancient Greek and the Maya at the same time are superficially used to evoke a mysterious sci-fi atmosphere. Needless to say, such wonders can’t be found in present-day, industrialised Germany. And so, Herzog must go back to more romantic times as in The Enigma of Kaspar Hauser (1974) or Nosferatu (1979).

A closer look reveals that Herzog’s romanticism is rather personal. Some critics call this his “burden of dreams”, as Les Blank shows in his famous doco Burden of Dreams (1982), about the shooting of Fitzcarraldo. I would rather call it an obsession. Herzog is obsessed by obsessions, be it his or others. This allows for both extraordinary feature films and documentaries, like The Flying Doctors of East Africa (1969), The Great Ecstasy of the Woodcarver Steiner (1974) or The Dark Glow of Mountains (1985) (about Austrian mountain-addict Reinhold Messner). This obsession can even lead to a film about nothing happening, probably a unique achievement in film history. In La Soufrière (1976), a volcano on a Caribbean island about to erupt threatens total disaster. But unsympathetic to Herzog’s eagerly waiting camera, the ‘inevitable apocalypse’ is aborted and the volcano simmers.

Closely related to obsession is the vision of strong, striking imagery. Many of Herzog’s films are like loose agglomerates around a central resonating image – the ship on the ridge in Fitzcarraldo; the valley in Crete with its hundreds of rotating windmills in Signs of Life (1967); the Lilliputians forever driving around on a motorbike in Even Dwarfs Started Small (1970); the camera circling the lonely Aguirre on his raft in the backwaters of the Amazon jungle. And if you rely as much on images as Herzog does, a succession of images with magic beauty and without any plot whatsoever is a convincing piece of art – take Fata Morgana for example.

Another important feature of Herzog’s work, and closely related to his use of myth and imagery, is landscape (not to be confused with simple nature). The landscape’s subtle depiction – often accompanied by the ethereal music of Popol Vuh – sets the mood of a film. But gradually landscape becomes a kind of mindscape of the lead character who almost always is an obsessed lunatic, a pathological outsider, .a loser on a grand scale – a mythological loser. The penultimate example is Klaus Kinski, who was never near as good as when working with Herzog in their love-hate relationship.

Despite appearing early in his career, Aguirre, Wrath of God is for me the quintessential Herzog movie. It has all the typical ingredients: Kinski as the maniac; extremely sensitive camerawork by Thomas Mauch (especially during the descent of the Andes); and music by Popul Vuh. It’s shot on the most unlikely location – the Peruvian rainforest near Puerto Maldonado, in the vicinity of which Fitzcarraldo was to be shot nearly 10 years later, and with more than just a little help from his friends, a handful of Latin-American filmmakers who also act in it. It deals with possibly the most obsessed group of people in history, the Spanish conquistadors, and their desperate hunt for the most magic of all Grails, the elusive golden land of El Dorado – leaving destruction and death to millions in their wake. A few lines in an old chronicle is all that remains of the historical facts, thus leaving plenty of room for Herzog to employ his imagination and re-arrange the facts. In short: an ideal topic for a visionary director, tackled with just the right crew, and on a location guaranteed to make the shooting an ordeal in itself.

And an ordeal it was. For much of the time, the location consisted of three differently-sized rafts slowly gliding down the head-waters of the mighty Amazon river: one for the action proper, a second to set up the camera on, and a third one, dangling a few miles behind so as not to be in frame, providing basic accommodation and meals. Scorching sun, high humidity and mosquitoes galore took their toll. At one point Kinski, forever true to his reputation, insisted on the fulfilment of his contract: if no air-con room at night, no work. With this luxury about 1,000 km away, Herzog saw only one chance to save his film: at gunpoint he threatened to kill Kinski and later explain his disappearance with an unfortunate incident in the perilous waters. As we all know, Kinski kept on working.

As always, Herzog was quick to take advantage of situations, especially as this was virtually a low-budget production. When they incidentally happened to float by a burning tribal village on their rafts, a short scene was included in the film. The monkeys for the second-last scene were simply stolen from a freight ship bound for the States, where the poor animals should have given their lives in labs for the benefit of new cosmetics and drugs. Though usually very eloquent, I never heard Herzog explain how he managed to get the big boat into the treetop – so at least this minor miracle remains unsolved.

Aguirre remains for me the most convincing of Herzog’s films in terms of narrative. Though there is little dialogue, this saves Herzog from getting overly tangled up in the construction of a plot, something German directors are never good at. Instead, the narrative is more or less a steady stream of images which not only sets the pace of the film but the mood as well. And as the river gets wider and likewise slower and calmer, so does the plot. It is the topography of the landscape that dictates the action, not the actors. They are, indeed, re-actors to their surroundings, which on the other hand reflect and mirror the growing madness and the feverish hallucinations of the doomed expedition.

Where there is dialogue, it does not push the action but characterizes the protagonists – exactly what a good line of dialogue should always do but seldom does. A consideration of the very first scene with dialogue will clarify my point. We have seen the expedition descending the wild mountains, carrying unnecessary impedimenta and showing out-of-place behaviour. Now Aguirre stands at the river beside Gonzalo, brother of Francisco Pizarro, the conqueror of Peru, and says: “Nobody can get down that river alive”. As we later learn, this is a truly prophetic remark. But it proves as well that Aguirre at this point is still completely sane and pragmatic. A remarkable contrast to his later behaviour when he pushes forward with all his might. With no companions left and his dead daughter in his arms he hallucinates about founding the biggest empire ever, a Pure Dynasty built on an incestuous matrimony with just this daughter.

I stress this scene for two reasons. Firstly, the basics of Aguirre’s character as well as the outline of the plot are evident in just three laconic lines of dialogue – quite an artistic achievement. Secondly, this dialogue was improvised and spoken by Herzog right on the spot during shooting. This can easily be proven by the published screenplay, which doesn’t contain these lines.

Herzog materialises as a masterly “auteur” – in control of imagery, narrative and characterisation. In fact, Herzog’s Aguirre has hardly anything in common with the historical person, and neither his positive portrayals in Latin-American literature nor other films. Aguirre is Herzog’s own creation, skilfully crafted and artistically convincing.

Aguirre, Wrath of God is Herzog’s day of reckoning with the age of the conquistadors. I can’t think of a more scathing exposure of greed and insanity as motivators of human behaviour barely disguised behind a fake missionary approach. The one-dimensional greediness of the Spaniards may still be comprehensible – the same greediness in the name of God, as portrayed by Dominican monk Gaspar de Carvajal, is not. Aguirre, the Wrath of God seems to me the perfect film to mark 500 years of European colonisation of Latin America.