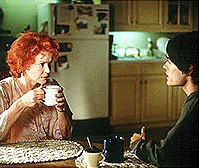 In Requiem for a Dream (2000), director Darren Aronofsky taps into several obsessions of American culture, chiefly the idea of happiness, which is frequently confused with entertainment. Amusement parks, money, and television all promise immediate gratification, an instant change from the boring ordinary to the fabulous extraordinary. More than anything, though, they promise happiness. Not only a stark meditation on drug-taking, Requiem for a Dream is a meditation on various forms of consumption. Advertising promises products that not only simplify but better one’s life, a return to infantile security and comfort – the American Dream stripped to its consumptive core.

The constant message that something external to ourselves will solve everything is a backbeat of modern life. Adapted from Hubert Selby Jr.’s 1978 book of the same title and co-scripted by Aronofsky and Selby, Requiem for a Dream offers an unpleasant glimpse of how awry the whole system can go. It never lets up, culminating in a crescendo of meticulous editing and off-beat shots to show a modern, garish hell.

The New York City Coney Island Cyclone roller coaster is one of the first images of the film, setting both the tone and pace that will dominate throughout – and watching it feels like riding down a chute in an open car, a skewed version of the amusement park ride. The story concentrates on four characters, with Sara Goldfarb (Ellen Burstyn) and her twentyish, drug-addicted son Harry (Jared Leto) at the center. Widowed and alone, pudgy Sara comforts herself with sweets and television. She watches only one program, the Tappy Tibbons Show, a coarse amalgam of diet guru, religious zealot and audience participation program that’s like a post-nuclear Day of the Locust (John Schlesinger, 1975). Summoned by a telephone call to be a game-show contestant, Sara uses powerful diet pills to shrink into the self she wants to see on television.

Meanwhile, Harry and his best friend Tyrone C. Love (Marlon Wayans) begin a briefly prosperous drug-dealing business. Their effort has little to do with entrepreneurial intentions – it’s just the most expedient way to keep themselves supplied. Flush with success, Harry convinces girlfriend Marion Silver (Jennifer Connelly) that together they can open a shop to feature her clothing designs. Sara and the young people share an all-American belief in the possibility of a fantastic, instant event that catapults a drab life into one of happily-ever-after ease. Less American Dream than American Daydream, this fantasy doesn’t involve any sort of process and not even a real goal: it’s the overnight-sensation promise made by television, advertising, or lottery tickets. The unexpected, sudden piece of luck that could give their lives a real shape and definition. Their drugs seem to offer the swiftest attainment of this generalized, childish dream of admiration, happiness, and love. Explaining his haphazard drug-dealing scheme to Tyrone, for example, Harry declares everything will be fine and “no more hassles”, as though any one action could dissolve all his problems.

Aronofsky provides few scenes to convey his characters brief moments of joy, just enough to make them sympathetic. Nobody really connects. Aronofsky splits the screen to get this across, most effectively when Harry and Marion are lying together, their caresses foreshortened and attenuated by the split frame. But the actors give such striking performances that their situations need little elaboration; these are people eager to find the quickest solution possible to their loneliness and fear, people who have no control over their world. (An especially nice touch is Aronofsky’s use of odd framing: Sara is often seen from inside her mailbox as she frantically awaits word on her television appearance; Harry and Tyrone are seen from the back of the closet where they keep their cash, their focus as narrow as Sara’s.) The inevitable descent of this quartet as they try to win at a game rigged for failure – as any abuse of drugs is – becomes as compelling as it is terrifying.

Central to the film are Sara’s fantasies and speed-induced hallucinations. Despite frequent intercutting among the various characters, Sara becomes a focal point: she has almost no contact with the world outside and her paranoia extends even to her own appliances. Burstyn gives a convincing portrait of full-scale denial at its most calamitous – she simply cannot see straight. A long scene with Leto in which mother and son discuss the future shows how Harry and Sara talk at complete cross-purposes, each one clinging to fantasies rather than allow reality to break through. Leto’s Harry has a sweet credulity – someone who could hide his head in a paper bag and actually believe that not being able to see others makes him invisible. The friendship with Tyrone never strikes a false note, due in large part to Wayans’ perfect timing and controlled performance: his Tyrone is another lost little boy, adrift and blinkered. As Marion, Connelly has just the right combination of pretty-girl swagger and insecurity. Her’s is the most determined fall into degradation, epitomized by the viperine smile that simmers on her lips after her final abasement for a fix.

At its simplest level, Requiem for a Dream presents a nearly unbearable narrative of the ghastly tedium of drug addiction. Rather than lingering on the actual shooting up or pill-popping, Aronofsky repeats a lightning-fast montage of clean, minimalist images (dope, swab, syringe, dilated eyeball) with so much of the pop and fizz of soda commercials that only the ‘ahhh’ is missing. The sound effects – such as the perfect hollow pop every time Sara takes her pills – work in harmony with the images to convey the dull repetition and anodyne ritual that make up any addiction. By using familiar ploys and images only slightly askew of what television advertisements regularly show, Aronofsky manages to get across the sameness and pervasiveness of addictions of all sorts without becoming didactic.

It’s the first hint of the superb use of sound in this film, both ambient and on the soundtrack. Requiem for a Dream‘s fantastic score by Clint Mansell works on its own as a requiem but coupled with the images, it becomes integral to the harrowing effects of the film. Precise, spare, and elegantly played by the Kronos Quartet, the music has a harsh beauty that does not soothe. It is piercing and has a feeling of doom that brings to mind Bernard Herrmann’s Psycho (Alfred Hitchcock, 1960) score, with bits of Jack Nitzsche’s Exorcist (William Friedkin, 1973) here and there. In many ways, Requiem for a Dream is a horror movie in the tradition of both Psycho and the Exorcist, but the horror here is the hollowness at the center of the characters’ lives.

The exceptional sound design amplifies this emptiness. It echoes with cold commonplace noises – metal doors being slid shut, metallic echoing, cash registers tallying, a phone off the hook; and some oddities, what sounded like a sword being removed from its scabbard in the drug-dealing sequence, the overall effect haunting and unsettling.

The characters in Requiem for a Dream use slightly old-fashioned slang. The Coney Island setting feels timeless, the characters live only in a future that excludes the present. There’s a late-twentieth century indeterminacy to the film that gives it a parallel reality. It feels less contemporary than deeply familiar, a shared, recognizable present. Despite the generally realistic mood, Aronofsky uses wild special effects with much of the verve David Cronenberg showed in Naked Lunch (1993) – Sara’s refrigerator’s ‘feed me’ as nightmarishly demanding as William Burrough’s insistent typewriter. Feeding is an integral metaphor in Requiem for a Dream. The few scenes in which people actually eat are uniformly off-putting (Sean Gullette as Arnold, Marion’s sometime therapist and occasional sex-for-money partner, cannibalistically tearing at his steak especially so) and each of the characters share a need to be filled up, fed and sated. At the same time, the film caters to the viewer’s need to be fed increasingly disturbing images, upping its own ante from shot to shot.

Aronofsky’s power lies in his ability to implicate the audience. Requiem for a Dream resists passive watching in much the same way that Peeping Tom (Michael Powell, 1960) does: neither film softens its subject-matter and both force the viewer to acknowledge their part as witness. Peeping Tom capitalizes on the viewer’s voyeurism, the underlying compulsion to look and look again. In a similar way, Requiem for a Dream keys into a level of viewer sensationalism, graphically detailing the ravages of consumption at its extreme: the disquieting images make passive viewing impossible.

Initially, the final scenes in which each of the characters assume a version of the fetal position seemed heavy-handed, but subsequent viewings confirmed it as a fitting coda. This film demands much from the viewer and the rewards are bitter. Unlike many recent graphic films about drugs, addiction is not dolled up to be cutely serious but instead shown in full creepy regalia. Truly nauseating.

And there is violence, but not the oddly reassuring rock ’em, sock ’em style America frequently exports. It’s the violence of appetites flagrantly out of control. Aronofsky conveys something more pernicious and subtle than the rage that usually finds expression in American films: ultimately, Requiem for a Dream is profoundly disturbing because it shows true despair.