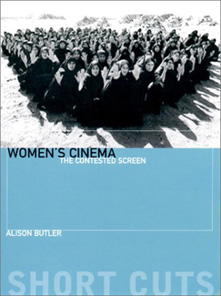 Published in June 2002, Women’s Cinema is one of the most recent books in the Short Cuts series by Wallflower Press. Aimed primarily at students, Short Cuts offers introductions to various film genres, movements and aspects of film studies. Other recent titles in the series include Mise-en-scéne: Film Style and Interpretation, New Chinese Cinema: Challenging Representations, and Animation: Genre and Authorship.

In approaching a subject matter as protean as ‘women’s cinema,’ a writer first has to draw a circle around the area under discussion. And, it is the nature of a circle that some things will be included and others left out. It is not within the scope of a short, critical study such as Alison Butler’s to either provide a comprehensive overview of the history of women’s filmmaking or exhaustively rehearse the range of critical debates in feminist film theory. Butler’s discussion necessarily focuses upon certain filmmakers and theorists to the exclusion of others. However, Women’s Cinema: The Contested Screen offers a smart and challenging introduction to readers unfamiliar with the field. Teachers, and others with a background in women’s cinema, will appreciate Butler’s fresh insights and her articulate synthesis of the critical material.

Butler’s book begins with an acknowledgement of the difficulties that attend the task of defining women’s cinema. She writes,

Women’s cinema is a notoriously difficult concept to define. It suggests, without clarity, films that might be made by, addressed to, or concerned with women, or all three. It is neither a genre nor a movement in film history, it has no single lineage of its own, no national boundaries, no filmic or aesthetic specificity, but traverses and negotiates cinematic and cultural traditions and critical and political debates. (1)

One of the strengths of Butler’s study is its refusal to promote women’s cinema as a homogeneous or sealed category. While other studies which take a gyno-critical approach might essentialize women’s experience, Butler stresses the discontinuities in women’s cinema, promoting it as “a hybrid concept, arising from a number of overlapping practices and discourses” (2). Films by women cross generic, aesthetic and social boundaries. Therefore, studies on ‘women and film’ shouldn’t be the only scholarly context for films made by women; and women-centred studies must acknowledge the many different frameworks and discourses which enrich and inflect women’s experience.

Women’s Cinema is theoretical in its orientation. In her introduction, Butler reviews the “founding debates” of feminist film theory and explores the way key issues such as spectatorship and representation have been developed. She does not attempt a complete overview of feminist film theory but rather pursues a specific line of inquiry, namely, the project of defining the relationship between women’s cinema and other cinematic traditions. Butler traces this problem through the work of Claire Johnston and Teresa de Lauretis among others, identifying a critical tradition which defines women’s cinema in terms of its revision of patriarchal film. Butler contextualizes the writing of theorists such as Lucy Fischer, Judith Mayne, Patricia Mellencamp and Tania Modleski in terms of Johnston’s early framing of women’s cinema as a “counter-cinema” which strategically re-writes and revises mainstream cinema.

Butler builds upon the revisionist tradition founded by Johnston in promoting the idea that women’s cinema is a “minor cinema” which exists within other cinemas. The concept of “minor cinema” derives from Gilles Deleuze and Felix Guattari’s concept of “minor literature.” (1) According to Butler, a minor literature “is not like a literary genre or period, nor is classification as minor an artistic evaluation […]. A minor literature is the literature of a minority or marginalized group, written, not in a minor language, but in a major one” (19). In Too Soon Too Late: History in Popular Culture, Meaghan Morris likewise makes a connection between Claire Johnston’s work on women’s cinema and Deleuze and Guattari’s concept of minor literature (Butler 19-20) (2). Further, as Butler points out, Deleuze himself applies the concept to post-colonial films in Cinema 2: The Time-Image (Butler 125n2).

The notion of women’s cinema as “minor cinema” hinges on the idea that women are a dispossessed or, to use Delueze and Guattari’s term, “deterritorialised” group. The concept of “minor cinema” frees women’s cinema from the binarism that the notion of counter or oppositional cinema implies. Instead of being defined as representing a counter-aesthetics, women’s cinema becomes a contesting force defined in relation to or located within other types of cinema. Thus, strategies of appropriation, re-writing and revision are employed by women filmmakers to challenge the conventions and premises of mainstream cinema. Butler describes her main argument as follows:

The assumption of this book is that women’s cinema is not ‘at home’ in any of the host cinematic or national discourses it inhabits, but that it is always an inflected mode, incorporating, re-working and contesting the conventions of established traditions. (22)

In an effort to address the diversity of women’s cinema, Butler organizes her study so that it encompasses mainstream, avant-garde and transnational cinemas. The book is divided into three main chapters each of which reflect a particular area within women’s cinema: genre and gender in Hollywood cinema (chapter one), women’s experimental film (chapter two), and the impact of cultural geography and located feminist theory on women’s cinema (chapter three). Each of these areas warrant a fuller discussion. Chapter two is the most focused of the three; in it, Butler concentrates on questions of female authorship and strategies of “self-inscription.” Her arguments concerning reflexivity, autobiography and first-person narration represent an interesting inroad into the work of avant-garde filmmakers such as Maya Deren, Yvonne Rainer, Chantal Akerman and Mona Hatoum. The third chapter, which is somewhat unwieldy in its approach, deals with female filmmakers from a number of national and cultural backgrounds in terms of Adrienne Rich’s concept of the “politics of location.” Butler discusses the interventions of women filmmakers in different national film movements (e.g., New German Cinema and New Iranian Cinema), and uses basic concepts such as post-colonialism, hybridity, diaspora and exile in order to discuss a range of films. Her survey of directors such as Rakhshan Bani-Etemad and Moufida Tlatli is somewhat cursory, but provides a small window into non-Western film practices and industries, and serves to throw into relief questions of national and cultural identity.

In her Afterword, Butler promotes the increasing relevance of comparative and cross-cultural analyses and calls for the kind of comparative studies that were not possible during the nascent period of feminist film studies in the 1970s. She writes, “Today, although women’s filmmaking is still very much a minority activity, there is now enough work in a wide range of styles and from a variety of cultures for a different kind of writing to come to the fore, writing which is historical and comparative.” (119). Butler also stresses that women’s cinema, because of its location at the cross-roads of many different traditions and discourses, lends itself particularly well to studies concerned with “transnational cultural and economic interactions” (119). In her discussion of feminism’s response to globalisation, she argues,

Women’s cinema is well-placed, literally, to address […] transnational processes and the interrelationships between them: as minor cinema, it inhabits cultural and political formations without being entirely naturalized there, and at the same time exceeds them, through its lateral affiliations. (123)

Overall, Butler succeeds in presenting complex and nuanced ideas in a straightforward and uncomplicated manner. Her focus on the trope of re-writing and revision within women’s cinema serves to unify a study which might otherwise be quite fragmentary. She uses concrete film examples to illustrate her arguments. Her thumbnail analyses of a wide range of films will be useful for students in introductory film studies courses who are learning to write critically about films and who want to hone their close reading skills.

One criticism I would offer is that Butler’s study is somewhat auteurist in its approach. She focuses on the contributions of female directors and largely ignores the variety of other ways that women participate in the film industry. With the exception of passing references to actors such as Clara Bow and screenwriters such as Zoe Akins (34), Butler tends to de-emphasize the collaborative nature of filmmaking. However, the focus on directors may be a function of the brevity and limited scope of the study.