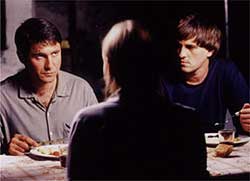 It’s touted as a smash-hit thriller, a film of Hitchcockian suspense. To be truthful, it’s only moderately successful on both counts. Yet Dominik Moll’s Harry (He Is Here To Help) (2000) is still an engaging, sporadically suspenseful, frequently amusing drama that combines genre and allusion into a successful mix. Relying on the generic device of the ingratiating stranger, Harry follows the tradition of recent films such as Pacific Heights (John Schlesinger, 1990) and The Hand That Rocks the Cradle (Curtis Hanson, 1992) as it charts the malignant influence of the intruder on the family. But perhaps it more closely reflects Hitchcock’s Strangers on a Train (1951), where the chance meeting quickly invokes a murderous contract of emancipation between the too-trusting schmuck and the moneyed amorality of the interloper. Harry seeks to emulate the uncomfortable relationship that bound Farley Granger and Robert Walker in the Hitchcock film; the trains and smoking cars giving way to the highways and winding backroads of rural France. Moll’s film may well owe its inspiration to Hitchcock’s Strangers on a Train, and this film could just as easily be slyly retitled The Trouble With Harry. Yet this Harry is not merely homage and deference to past works, a pastiche of styles and narrative devices like so many other films that seek to emulate previous masters of the genre. Moll keeps his film within the generic constraints, but invigorates it in small, subtle ways, mixing quite realist drama with the insane fantasy world of the obsessed Harry. It would be wrong to suggest this film will encourage an adrenaline inspired commitment from the viewer to the narrative, ensnaring you in an he’s-behind-you web of chills and action. What it does do very effectively, however, is to create some very real, very honest characters, and throw them in a pot with someone whose morality and personality sits so precariously and uneasily in balance, meanwhile tracing a growing sense of disquiet and distrust that casts a pall over the family unit. Harry may not be the shock-horror thriller it is advertised to be, but it is a creditable film about family relationships and the way that this core unit copes with the menacing expediency of an obsessive interloper.

Much of the success of the film is forged from the effective opening sequences – it’s here we are allied and bound to the family about to be put to the test. Harry (He Is Here To Help) opens with the family travelling in their unbearably hot car to visit the parents of the driver, Michel (Laurent Lucas). His wife Claire (Mathilde Seigner) attempts to pacify their three girls, who cry and wail and misbehave, bored by the drive, stifled by the heat. Michel and Claire may be short-tempered, and their family unit disorganised and flawed, but the bonds that unite them are established firmly and cogently. It’s an important beginning for a film in this vein – we need to be aware of the weaknesses and strengths before the outside force tests the core of the unit, and Moll establishes these elements with deft, economical touches. An apparent chance meeting with Harry (Sergi Lopez, seen recently in Frederic Fonteyne’s Une Liaison Pornographique [2000]) in a roadside restroom prompts a wonderfully nervous, awkward conversation between Michel and the man who claims to be an old classmate. Within minutes, Harry has invited himself and his girlfriend Plum (Sophie Guillemin from Cedric Kahn’s L’Ennui [2000]) back to Michel and Claire’s remote farmhouse to recall the old times that Michel barely remembers. It’s here – at the farmhouse – we learn that Michel and Claire face a number of problems: Michel’s parents can be difficult, their car lacks air-conditioning and is unreliable, and the house they have purchased consumes all their time and money in their attempts to renovate and improve their living conditions. But, as Plum points out, Harry is a man of solutions, and as such, he begins to resolve the problems that face the couple by any means necessary. It’s a nice, if somewhat incredible premise, but it allows for an escalating feeling of unease as Harry acts in what he believes to be Michel’s best interests. It is perhaps the spur of Harry’s obsession that proves the most difficult obstacle in this film to overcome. Whilst Robert Walker in Stranger on a Train acts to emancipate Farley Granger’s troubled tennis player on the understanding his deed will be reciprocated, Harry appears to act merely for art and friendship’s sake, to clear the path for Michel’s return to writing. Harry is clearly affected by several pieces the young Michel had published in the school newspaper – he can even recite them some twenty years after their publication. That he is prepared to go to these extreme lengths to encourage Michel’s return to his adolescent dream of being a writer seems too flimsy an excuse to prompt an obsession, let alone a murderous rampage. But if you can swallow this, or perhaps, view Harry as merely an invention, a wish fulfillment fantasy for the overworked Michel, then what follows makes Harry a more cohesive, credible film.

Central to the success of this film is the dialogue, written by Moll and Gilles Marchand. It is a clever, witty script that smacks of experience with the family scenes. The screaming, insistent infants are not the disposable ‘naughty children’ stereotype you so often see in films, absurdly over the top and caricatured. These children simply howl long and loud, kick the back of the seat, and play noisily and get infections that make them cry, and they seem all the more real for that. Similarly, the parents find themselves in a common situation, dug into a hole where the task is survival, where they live one day at a time, biting down on the anxieties and bitterness, and waiting for the day when things will magically improve. You get a very real sense of this through Michel, and the excellent performance by Lucas. Michel is a man who clearly had aspirations, but has had to let them go, buckling down to the responsibility of parenthood and marriage. There is no real sense of resentment for the sacrifices he has made – he clearly loves his wife and children, but his life has become such a difficult task of apparently insurmountable problems that his existence has become grim, more a test of tenacity than anything else. Claire, too, recognises what her life has become and there is a very honest desperation in their scenes together. Moll’s attention to these characters pays off handsomely, and the direct contrast between the bonds of the domestic with the careless freedom of the wealthy proves effective. Whilst Harry himself, and his girlfriend Plum are perhaps less well drawn and motivated, the family unit itself is a remarkably successful creation. Lucas has a sort of stunned earnestness that melds stoicism and sensitivity, whilst Seigner as Claire carries the expedient brusqueness of a woman tied to the child on her hip and with a house to maintain. The blackness of the comedy lightens the load, and the cleverness of the script ensures that even when things are at their bleakest, a gently observed irony or backhanded quip dispels the misery and propels the narrative along with a tone both taut and breezy. Even the compelling conclusion mixes suspense and a kind of stunned matter-of-factness that works to the benefit of the film.

So whilst Harry may not be a film that will reduce you to hiding your gaze and gripping the seat in suspense, it does offer moments of both tension and easy laughter. It’s an amiably pleasant film that intrigues and compels rather than generates sustained tension and suspense, and it certainly owes much to a number of other films for its characters and narrative. The camera work is efficient, but unexceptional, although the night sequences are appropriately sinister and quite effective, and Moll makes the most out of the isolated farmhouse and its requisite creaks and crevices. The performances in the film and the genuinely accomplished script are perhaps the elements that most make Harry (He Is Here To Help) such a success. It may be derivative, generic, and adhere strongly to conventions but this French film with the awkward title does attempt to breathe new life into such conventions with a genuine mood of unease, coupled with a warm and funny style. As a study of family, and the forces that threaten to corrupt it, Harry succeeds in a charming, if sometimes uneven fashion. Driven by the ever-helpful Harry, Dominik Moll’s film sets up problems and sorts through solutions in a clever, wry manner that never quite reaches the heights of Hitchcock, but still succeeds in traversing its domestic and psychological terrain with bold, confident strides.