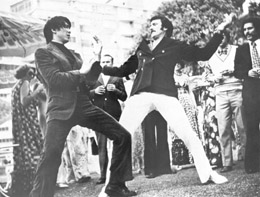 The Man from Hong Kong (1975) shares a certain generic experience with Michael Powell’s They’re a Weird Mob (1966), both films having been restored by ScreenSound Australia: National Screen and Sound Archive and recently unwound in film festivals (The Man from Hong Kong was the closing film at the Sydney Asia-Pacific Film Festival; They’re a Weird Mob was shown at the Melbourne International Film Festival). On a structural level, both are co-productions with their lead protagonists being foreign men who come to Australia at different periods of time but share a common experience as migrants (or perhaps, a would-be migrant in the case of the eponymous man from Hong Kong). Nino Culotta (played by Italian actor Walter Chiari) of They’re a Weird Mob comes from Italy, landing in Sydney to assume a position as a sports editor in an Italian-language magazine run by his cousin who has absconded and left Nino all alone to fend for himself. He finds a job as a bricklayer; is basically inducted into Australian ways through associations with archetypal Aussie mates; and finally succeeds in courting and marrying an Australian woman, the daughter of a big-shot builder (played by Chips Rafferty). In The Man from Hong Kong, Inspector Fang (Jimmy Wang Yu) of the Hong Kong Special Branch lands in Sydney on a mission to extradite dope smuggler Win Chan (played by Sammo Hung), but really wants to nab the top man in the organization. He gets the name of the kingpin after beating up Win Chan, who is then killed by an assassin. Fang goes after the kingpin like the Asian flu, irrepressible and undaunted even after scores of heavies are set upon him.

Fang is chaperoned around Sydney by two white cops, Grosse and Taylor (played respectively by Hugh Keays-Byrne and Roger Ward). These two characters are included for a purpose. Like Nino’s Australian mates, they play an inductive role, providing Fang a local perspective about Australian customs, but in a subliminal way, they also act as a buffer between the Australian audience and the foreign protagonist by inducting the audience into accepting foreign heroes in Australian movies. Certain racialist pejoratives are given voice to in both films, more in the nature of banter, the better to point out and deride longstanding local prejudices, and to ease the audience towards accepting non-Anglo characters. For example, Grosse and Taylor provide a running commentary about Fang’s idiosyncratic methods of pursuing and catching criminals. Fang of course is a kung fu expert who resorts to chop and sock techniques (beating up Win Chan, for example, to obtain the kingpin’s name), and in one scene, is compelled to use traditional weapons like swords and red-tasselled spears in the manner of a wuxia hero (or knight-errant) to fight off the heavies. He’s so effective that he leaves a trail of corpses behind him. “Talk about the yellow bloody peril!” Grosse exclaims, while Fang barges his way into the hideout of kingpin Wilton (played by George Lazenby) for the climactic confrontation.

Wilton too gets to utter a line that isn’t so PC today: “I never met a Chinese yet that didn’t have a yellow streak!” Still, Wilton is a toned-down villain. “I understand your culture, your language and your martial arts,” Wilton tells Fang – and that’s the sort of multicultural spirit that even villains adhere to in international co-productions. Wilton’s “yellow streak” comment is really meant as a challenge to Fang. At the time, Jimmy Wang Yu was the right kind of hero to take the insult in his stride – his heroic persona being boosted with just such a provocation to national pride. (1) Wang’s heroic persona is usually tinged with nationalistic colours (when he’s not pitted against Caucasian bad guys, as here, he’s fighting Japanese, as in The Chinese Boxer [1970], Zatoichi Meets the One-Armed Swordsman [1970], and Beach of the War Gods [1972]), and Lazenby’s line sets up a last ferocious action sequence that will see the hero ultimately victorious (at the other end of the co-production equation is of course the Asian audience whose expectations of the hero the movie obviously had to satisfy).

The roles of the two female characters Caroline and Angelica (played respectively by Ros Spiers and Rebecca Gilling) serve to shore up Wang’s heroic persona from a sexual perspective – at the same time they also serve to make the point about overcoming local prejudices. Like Nino, Fang is denoted as a foreign male who makes sexual conquests of Australian women, but while Nino had to assiduously woo the woman of his desire (effectively, Nino had to work very hard to gain the acceptance of the Australian community), Fang’s sexual relationships are practically given. In 1975, times had changed so much that Fang could be shown to have sexual encounters with two women. (2) This Lothario-like persona of Jimmy Wang Yu is one of the character traits that made him different from other Hong Kong martial arts stars who were given international profiles: a contemporary like Bruce Lee, or a subsequent star like Jackie Chan (both of whom are practically celibate in their international films where the focus is on martial arts, traditionally associated with Shaolin Temple monks who must observe abstinence). The hero’s sexual permissiveness, along with the inclusion of a white villain (played by a recognizable actor of some international stature), really differentiated The Man from Hong Kong from its competitors – such boldness was really a one-off experiment in the kung fu cinema at the time (and one could argue that it was only possible because of the more open attitudes of Australian filmmakers). Although one can’t make many claims for aesthetic achievement on its behalf, The Man from Hong Kong is a watershed in the development of the kung fu genre, at least from 1973 onwards.

That year, the West was inundated with a rash of kung fu movies that became hugely popular at the box-office and which gave rise to the phenomenon of the international co-production in the Hong Kong cinema, taking advantage of kung fu’s box-office appeal in the U.S. and European markets. Enter the Dragon (1973), starring Bruce Lee, was the first co-production deal between a Hong Kong studio and a Hollywood studio. Following this success and eager to consolidate kung fu’s appeal since a setback the genre had suffered with Bruce Lee’s sudden death in 1973, Hong Kong’s two major studios (Shaw Brothers and Golden Harvest) scrambled to get into the international co-production market. The Man from Hong Kong was a product of this trend, and it tends to get lumped together with other co-productions of this period (1974-75), such as Shaw-Hammer’s Legend of the Seven Golden Vampires (1974) and Shatter (1974), Shaw-Warners’ Cleopatra Jones and the Casino of Gold (1975), and the series of films produced by Shaws and Italian partners, Supermen Against the Orient (1974) and Supermen Against the Amazons (1975). Caught in this dismal company, The Man from Hong Kong is easily overlooked. Long dismissed, it is only now gaining reappraisal, thanks to a retrospective critical view about the movie’s historical significance in both the Australian and Hong Kong contexts. (3) It was of course the first Hong Kong-Australian co-production, one done purely for commercial reasons, but the film contains a sub-text that works as a reminder of Australia’s changed outlook towards Asia (during the Whitlam era Asia was increasingly seen as a source of migrants and as a crucial region to which Australia would acknowledge itself to be a part of). On the Hong Kong side, it illustrates Hong Kong cinema’s inherent transnationalism and its early efforts to tap into the international market using the kung fu action genre as its main conduit.

Judged on its merits in relation to the co-productions of the period, The Man from Hong Kong stands up as an underrated work (though it doesn’t rate as highly as Enter the Dragon, mainly because Bruce Lee was a much more graceful and innovative kung fu fighter than Jimmy Wang Yu). It compares favourably with the Jackie Chan productions of the ’80s and ’90s, designed for international crossover appeal (The Big Brawl, The Protector, Rumble in the Bronx, Mr. Nice Guy, etc) which in many ways The Man from Hong Kong prefigures. The Chan films follow the formula of personalized stunt work and a narrative that strings together several set-piece action sequences, and this is where the film’s quality is entirely located. This is exactly the formula of The Man from Hong Kong, and part of the film’s appeal is the curiosity value in watching Wang Yu and evaluating him as a kung fu action star in comparison with the likes of Bruce Lee and Jackie Chan. (4)

By the time he made The Man from Hong Kong, Wang Yu was a well-honed veteran. He had been in many wuxia movies from the mid-’60s on, and was one of the first to get into the kung fu stream (The Chinese Boxer, which he directed, predated the Bruce Lee films by about a year). Wang, whose name is listed as co-director with Brian Trenchard-Smith in Hong Kong release versions though not in Australian versions (the co-directing credit basically acknowledges Wang’s contribution to the action sequences, some of which were filmed in the Golden Harvest studio in Hong Kong), incorporates elements of the wuxia genre into the generic kung fu format (with fight choreography credited to Sammo Hung). The wuxia influences are evident in those shots of the hero leaping through obstacles and doing levitating somersaults as he gives chase, and in the fight sequence set in Wilton’s martial arts gym where traditional weaponry is used.

As such The Man from Hong Kong bridges two periods and styles of martial arts (swordfighting wuxia and unarmed kung fu styles) and it blends in modern weapon props (Lazenby’s machine gun and hand grenades) and an international setting (Sydney, Australia) to signify the genre’s aspirations to modernize and reach out to the world. The film’s achievement must be seen in this context, and it’s a context that has since widened with Hollywood’s incorporation of kung fu choreography (Yuen Wo-ping’s kung fu balletics in The Matrix [1999], for example) and cooptation of major kung fu stars (Jackie Chan, Michelle Yeoh, and Jet Li). With Bruce Lee long gone, Jimmy Wang Yu is the granddaddy of the trend towards the internationalization of the kung fu movie. The Man from Hong Kong shows Australia’s role in giving momentum to this trend.