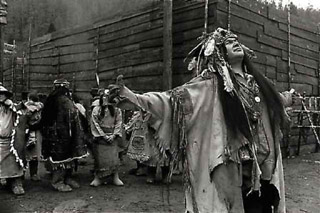 Shot by Robby Müller in a high contrast black and white reminiscent of the nature photographs of Ansel Adams, and with a sometimes jarring but always haunting solo-guitar soundtrack, courtesy of Neil Young, Dead Man immediately made the running for the Golden Palm when first presented at Cannes in 1995. Problems with its distributor, Miramax, delayed its American release but when it finally opened in the States a year later it was generally greeted with a sense of puzzlement and consternation. The highly influential American film reviewer, Roger Ebert, seemed to be voicing the misapprehension of many with his candid admission: “Jim Jarmusch is trying to get at something here, and I don’t have a clue what it is”. (1)

For other more imaginative viewers, however, Jarmusch’s intentions – and his achievement – in the film were immediately obvious. (2) To put it bluntly, the kid gloves had come off. In the earlier trilogy which had established his reputation as the leading American independent filmmaker of the 1980s, Jarmusch had always gently satirized the indolence and emptiness of contemporary American culture. But he had always done it, in true hipster fashion, in a minimalist style and with a cool sense of detachment, for the most part allowing his mild critique to emerge naturally in the perplexity of his films’ outsiders: Willie’s Hungarian cousin, Eva, in Stranger Than Paradise (1984), Benigni’s amiable Roberto in Down By Law (1987) or the young Japanese couple in Mystery Train (1989). With Dead Man, this satire of American culture was making a quantum leap to take on the features of a fully-fledged, passionate, moral denunciation. The target in the earlier films had largely been that vacuousness at the heart of American “throwaway” popular culture, but in Dead Man the object of Jarmusch’s critique seems to be nothing less that the very existence of America itself, to the extent that this existence has been clearly predicated on the wholesale destruction of the land and the cultures of native American peoples. (3)

It seems quite appropriate, then, that in framing his denunciation, Jarmusch should abandon the postmodern hybrid genres of his earlier films and here return to that most classical and “native” of genres, the American Western. But he adopts it, clearly, only to implode it, to utilize its own iconography against itself, to lay bare the spuriousness of its myths and ideology, in effect to put the genre itself “under erasure” (4). The result is that this most familiar of film genres is suddenly made, so to speak, newly strange. Or, as Adrian Martin put it, with his usual acuity: “Although Dead Man is obviously some kind of Western, it’s not one of those smart homages to a Hollywood genre (like Sam Raimi’s The Quick and the Dead) – it’s more like the ghostly burnt-out shell of a Western, commandeered for sullen and obscure purposes.” (5)

These “obscure” purposes, as we’ve already suggested, are directed at the foundational myth of America, the notion of the “opening up” of the West as the great dawn of American civilization. In order to pursue this objective effectively Jarmusch reprises the stratagem so often used in his earlier films, namely seeing/showing America – in this case the America usually portrayed in the Western- from the estranged perspective of an outsider to the culture. It’s fiercely ironic, of course, that the “outsider” in this burnt-out shell of a Western should be none other than an American Indian (played by Gary Farmer) who has consciously chosen to call himself “Nobody”. As arguably the only true “Native American” in the film, Nobody should, by nature, be the real “insider” but, like all native Americans living under the law of the gun, he has been relegated to the role of a foreigner in his own land. It’s even more ironic, of course, that Nobody, regarded as a savage by the white men, should be the only one in the film well-enough acquainted with European culture to be able to recognize the name of one of its major poets. If such ploys are somewhat reminiscent of the wry comedy in Jarmusch’s earlier films, here they function to set up a small but nevertheless significant and historic victory: for perhaps the very first time, after an entire century of whooping and screeching senselessly on Western screens, a native American is able, and with full justification, to pronounce the lapidary phrase: “stupid fucking white man!”

For all this, however, Dead Man is ultimately less a political treatise and more an allegorical cinematic poem in which, through a merging of the traditional iconography of the Western and the radical poetry of William Blake, Jarmusch succeeds in creating a filmic analogue of Blake’s subversive poetic vision whilst writing his own personal Lament for the fate Innocence at the hands of Experience. The result is a film that, in spite of the vehemence of its language – in lines that are taken directly from Blake- and the violence of its images – derived from the Western genre itself- actually comes to function in a highly contemplative mode. By the deliberate use of the fade out as a form of visual punctuation- a device introduced early in the film and then used consistently throughout- the narration is broken up into what appear almost as a series of juxtaposed tableaux vivants related by a slow, hypnotic rhythm, which thus makes a viewing of the film into something akin to a spiritual meditation.

Such a viewing ultimately gives the lie to the epigraph by Henri Michaux, which introduces the film, “It’s preferable not to travel with a dead man” for those who have made the journey with, and through, Dead Man will know that it offers a sublime poetic experience like few others in our jaded contemporary culture.