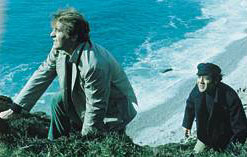 When Chabrol is discussed, Hitchcock tends to be as well. Like Hitchcock, Chabrol has been both wildly inconsistent, and yet, has also been able to ‘find’ two or three ‘golden’ eras or ‘veins’ within himself. After all, he has now been making films for about as long as Hitch, or even John Ford, ever did. The current ‘high’ period represented by films such as L’Enfer (1994) and La Cérémonie (1995), provides a contrast with Chabrol’s great middle-period -running from Les Biches (1968) to the degeneration signalled by Ten Day Wonder (1972). For what is better and what is worse in it, Que la bête meure (aka, This Man Must Die) remains for me the crucial work of this middle-period frenzy, central to a group of films often referred to as the Hélène cycle – almost continuously throughout this period the director’s first wife, Stéphanie Audran, recurs as a character bearing both the same name and the same set of femme-fatale associations. Even here, where Caroline Cellier substitutes for Audran, Chabrol was either too lazy, too efficient or too self-aware of his own internal intertextuality, to feel the need to rotate the name of his eternal woman.

Comparisons with the director’s current close working relationship with Isabelle Huppert are instructive: Huppert’s manifestations, from Une Affaire de femmes (1988) onwards, seem more noir, and yet she is also more an active agent of peril than the stationary, perilous hazard that the Hélènes always seemed to be. This, to me, helps argue for the influence of another, more misogynist authorial influence on the films of the Hélène cycle – the black Homeric voice of Chabrol’s then script collaborator, Paul Gégauff. The over-revving that Gégauff gave to Chabrol’s core themes is critical to the moral odor of the cycle (I say ‘odor’ because I can find no other way to describe the sensation). This was confirmed by their final lacerating autobiographical collaboration Une partie de plaisir (1974), in which writer, his real-life ex-wife and real-life daughter, essentially play themselves on screen in a grotty tale of adultery. Although these themes circulate throughout Chabrol’s cinema, they were equally Gégauff’s preoccupations; his own self-fulfilling tragedy, tabloidishly murdered at the hand of his second wife in 1983, can’t help but suggest this.

Actually, I have always felt that although Chabrol often drew close to a particular ‘kind’ of Hitchcock (for example, his recent Rien ne vais plus [1997] is the ‘lite’ Hitch of The Trouble With Harry (1955)), the Gégauff/Chabrol nexus created something that was far more like Fritz Lang; and nearly all of the Hélène cycle titles are in the – always earnest – Langian mode of sensual masochism. Lang tended to create fulsome, shoddily moral led characters in bijoux classical narratives. Whereas, no matter how nice the décor looks (or rather exactly because it looks so fetishistically pleasurable), the world of Que la bête meure, and of Chabrol and Gégauff in general, was too shoddily finished to function ‘classically’ as narrative. More like the worlds of Robert Aldrich or Sam Fuller, it idles roughly and grunts rawly, attenuated to handling moral themes rather than to obtaining a smooth narrative ride in order to get to them (and automotive analogies are very important to Que la bête meure).

To me, Emile Zola also comes to mind, even if Chabrol at first seems too selfish and indifferent to social justice issues. You quickly realise that Chabrol’s characters are the nouveau riche descendants of those found in Zola upwardly mobilised by the post-War, consumer bourgeois culture. In both Zola and Chabrol you will also find narratives driven too fast and too hard, unfinished edges of motivation and character relationships that don’t quite seem in tune. For example, in Que la bête meure Charles announces a ‘hip’ disinterest in material possessions at the very moment he pours his tea from a fine china pot and whilst surrounded by a lounge full of object d’art. Meanwhile, the gun Paul pulls on the boat seems like a gesture of bad generic habit rather than sound narrative plotting. Most of all, Paul’s bestiality is too excessive and grotesque a signification; Charles himself admits as much when he calls him “a monstrous being. such as one can’t imagine.” Disbelief is not terribly well suspended here.

But as with Zola, this is the point. Life and the values of life are cheap in Que la bête meure. Basically, they have gotten considerably cheaper since the time of Zola, as the possibility of Liberal redemption has been destroyed. Chabrol and Gégauff present a core post-Holocaust cultural thesis; liberal humanist values are old Gods, burnt-up in the pyre of World War Two, ground-down by the amnesia of the post-war Consumer Society. The film’s pre-credit opening represents exactly this collision between Fine and Pulp art values. Long location shots of a Mustang racing along the Brittany coast suggest a magisterial moment of filmmaking. But, by the late 60s, this kind of majesty was being reproduced by TV cigarette commercials and Claude Lelouch; and so Chabrol loves to spoil it all. There is no fineness in the style of this melodramatic moment; the editing bothers little to find a rhythm through normal technical niceties such as sound bridges. What is happening is cheap and nasty in style and in plot. The classical music has no innate majesty; it is just diegetic, a car radio’s ‘noises off’, another consumer disposable.

In Que le bête meure, civilising values certainly have none of ameliorating, civilising power Humanism would claim. Indeed, bourgeois sophistications such as décor, sexual libertinism or even poetry (which Paul sadistically disposes of at the dinner table on Charles’ first night there) are fetishes that hold a tribal order together. Intellect is a mask for savagery. At first, Charles suggests a fashionably existential figure. He tells Paul’s son to seize his individual destiny, that he is not the son of the father: “.the ground is without limits,” he writes in his diary; “. chance is wonderful and it exists. It’s the only thing that exists. everything is coincidence. I have all my life. And his..”

Paul would see his crucial break in bogging his car on that road of Fate as the outcome of Will. However, when Charles later invokes the Homeric Gods and their capricious interventions in life and death amongst the fates of the Trojans, we begin to wonder if Fate and the older Gods and are at play, determining things quite beyond the force of Man’s will.

Paul is chief amongst this pantheon. It is on him that these primal plot maneuverings coalesce – as they always have when Chabrol is at his best – from the slightly ridiculous into sublime texts featuring the speculative qualities of modern philosophy, the old/new themes of Dostoevsky or Nietzsche. It is our relationship with both Gods and Fathers in the modern moral climate that is at question. Paul is exactly the impulsive, moody, shoddy God that is omnipotent in our times. To the ‘cell’ of his family he is both provider and humiliator. This is Chabrol and Gégauff’s main challenge to the values of the classical, Hitchcockian thriller. Morals are not fixed and values are not stood for. We are social shells: human character can be interchanged just as the panel of a car can be replaced. Just as the names of Chabrol’s characters can be recycled, so they themselves practice identity and moral recycling; it doesn’t take much provocation for Charles to strike Hélène with the brutality you’d expect of Paul.

Charles and Chabrol are really all talk. Charles talks of murdering Paul’s ‘body’ as just the end stage of “.enjoying what I expect. killing his body will be like throwing away a peel after eating.” Fate is just too interesting to Chabrol for him to have much interest in narrative tactics of suspense or in the generation of Startle Response. Generic ‘suspense’ is a suitable and familiar lubricant for fatalist themes, so Chabrol will slop it on occasionally, as when Paul slips on the cliff-face. But here murder is not a risk-taking behaviour but ‘expected’. It is also perhaps, in the shocking way in which every member of Paul’s family wishes Charles onto murder, the effluent of social pathology. So how can it be a surprise? “I am going to kill this man,” Charles axiomatically writes at the outset. The Man must die. He will. But How? The Startle Response is in our recognition of a gruesome social and cultural mechanics. Charles’ modus operandi is ultimately so savage because it is an act of cultural transmission: like the tale of Abraham and Isaac in reverse, he educates the son in slaying the father. It is this refusal to accept the usual representational homilies of innately noble human nature, which makes Que le bête meure, for all its shoddy narrative engineering, into the sophisticated, critical study of class psychology that it is.