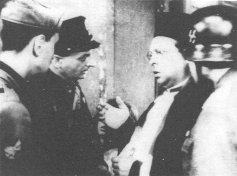 Touch of Evil is “about a nice couple from Hollywood movies who stumble into a film by Orson Welles.” (1) Terry Comito’s arresting line is a colourful way of synopsising the narrative and stylistic labyrinth which Welles’ film represents for Mike and Susan Vargas (Charlton Heston and Janet Leigh), and for us. It also hints at what this collection is overtly and implicitly about. Overtly, it’s about what happened to the cinema in the 1960s. Implicitly, it’s about the impact the ’60s had on writing on the cinema. It is as much an account of aesthetic revolution as an account of the history of the revolution.

The editors have chosen to focus significantly on Italian Neo-Realism, Anglo-American Neo-Expressionism, and Japanese Formalism, and the collection is a heady potpourri of polemic and practice, surface and section. Among the writers are thinkers – Bazin, Pasolini, Metz, Sontag – and filmmakers – Godard, Tarkovsky, Bergman, Angelopoulos. Included here are searching and cogent readings of films ranging from Donald Richie’s seminal “Introduction to Ozu” to Laura Mulvey on Sembene’s Xala (1974) and Paul Schrader on Bresson. To cover the book in a review is to become tempted to catalogue your favourite bits.

Central to Post-War Cinema and Modernity, Pasolini’s “The Cinema of Poetry” cropped up in Orr’s 1998 collection Contemporary Cinema (EUP). Post-War Cinema and Modernity feels as though it is built around it. When Pasolini gave the paper at the Pesaro Film Festival in 1965, he felt a sensibility emerging in cinema that departed from the classical Hollywood and Italian realisms, a cinema of “free indirect discourse”. (2) Substituting objective realism, whether the reality effect of Hollywood or the apparent facticity of Neo-Realism, with the skewered and neurotic subjectivity of the protagonist, such directors as Antonioni and Godard introduced world-views that would in time become the benchmarks of high auteurism. If Bazin in “Cinematic Realism and the Italian School of the Liberation” in 1948 championed the revelation of real space, Pasolini saw ontologies of the image that would resonate in Godard’s famous 1966 definition of cinema: “Truth 24 times a second.” If realist imagery all the way from Pay Day (Chaplin, 1922) to Rome, Open City (Rossellini, 1945) spoke to our visual memory of objects and their associations, a ‘cinema of poetry’ was strange and denatured, defying convention and description. It spoke as image rather than association.. ‘Cinemas of poetry’ could make the image startle with its newness and free it of the conventional devices of classical practice. A dissolve need not signal the beginning of a dream sequence. A sudden start need no longer be the actor awaking from it. Pasolini’s essay is key for identifying the revolution of the ’60s, and key for pushing language to accommodate the possibilities of modernist cinemas from Antonioni to Egoyan. Pasolini did by no means single-handedly change what writing on film could be. But his bold combination of literary models, leavened with history, sociology, politics and linguistics signals a coming-of-age in film writing to rival modernist cinema itself.

Orr points out that ‘cinemas of poetry’ have emerged from Tarkovsky and Kieslowski under communism to Chen Kaige and Zhang Yimou in China. Long the model for the cinematic poet, nevertheless Western bourgeois male auteurs and neurosis are not necessarily synonymous. Even The Red Desert (a key ‘poetic’ text for Pasolini), features a male director (Antonioni) fusing his world-view with the fraught subjectivity of his female protagonist. Whereas, for Orr, “In the filmic liturgies of male psychosis redemption is impossible” (3) (see The Conversation, Raging Bull, Naked, amongst others), in Three Colours: Blue (Kieslowski, 1993), the traumatised Julie (Juliette Binoche) does manage to redeem herself. The redemptive Ada (Holly Hunter) in the pop arthouse classic The Piano (Campion, 1993) shows how democratic modernist experiment had become by the end of the century, whilst modernist masters were recycling menopausal male desire in such as Beyond the Clouds (Antonioni, 1995) and Stealing Beauty (Bertolucci, 1995).

To the image and its perception, Tarkovsky and Deleuze introduce the issue of time. Tarkovsky’s films manage to collapse landscape, memory, dream and fantasy into a single ontological continuum. Arguing for an almost mystical respect for time and the ‘rhythm’ of the image, and fluent in his use of written imagery, Tarkovsky tells a triumphant anecdote of the protracted process of editing Mirror (1974): “as if linked by a bloodstream…the film was born before our very eyes.” (4) Finding truth in the integrity of the sequence shot not only flies in the face of that Soviet orthodoxy, Montage, but, as Orr suggests, is a worthy riposte to the selective amnesia of post-war Soviet life. For Deleuze, modernist cinema also confuses images of reality and subjectivity. But in place of what he terms a classical ‘movement-image’ of integrated situation and action, he sees a modernist ‘time-image’ of pure optical and sonic signs which recall the lyricism of song and a Nietzschian structure of recurrence which Deleuze terms the “bal(l)lade,” (5) Deleuze’ description of an image densely interwoven with past and present calls to mind that scene in Touch of Evil at Tanya’s brothel (Marlene Dietrich), with its mesmerizing fairground theme.

Whilst key essays focus upon the European art film, J.P. Telotte’s on American film noir reads its voice-over as a record of subjectivity and a subversion of Hollywood narration from within classical aesthetics. Such disorientation is echoed in Touch of Evil in which, for Comito, “Welles’ “Mexico” is a place of the soul, a nightmare from which a lost Hollywood sweater girl begs, mostly in vain, to be awakened.” (6) In a collection offering a fairer share of space than usual to the cinematographer, Duncan Petrie’s specially commissioned look at the work of Robert Krasker on The Third Man (Reed, 1949) and Jack Cardiff’s on Black Narcissus and The Red Shoes (Powell/Pressburger, 1946/1948), captures the birth of a liberating and exotic British auteur cinema. From the Petrie piece, you can dip into Michael Chapman’s discussion of the shooting of Taxi Driver (Scorsese, 1975). Amongst the most striking and original work here is Paul Virilio’s analysis of the role military technologies of perception – radar, laser tracking systems – have played in the evolution of lenses and the ‘derealisation’ of the image.

The myriad recording devices employed by warring governments during the 20th century would suggest to an alien a culture obsessed with imagery. For Peter Harcourt, Canadians already have a problem distinguishing the real from the imaged. In the films of Atom Egoyan, “Video is everywhere – recording experience, mediating experience, “surveilling” experience, reducing reality to replica.” (7) Rey Chow mobilizes a traditional Chinese antinomy denoting full, concrete, deep, male, versus empty, abstract, shallow, female to describe the difference between Chen Kaige’s inward subjectivist aesthetic and Zhang Yimou’s apparently superficial cinema: “the locus of the surface, which not only shines but glosses, which looks, stares, and speaks.” (8)

Contemporary cinemas have generated a compelling tension between the image and language for the film writer. How do you use language to enable the image to speak? How do you anchor language in the experience of watching? At a seminar at the 1996 Cambridge Film Festival, critic Michel Ciment said that to write well about a film is to write of its history since the film is simultaneously a film and a record of the film’s making. The essays in this book make you want to see the films. And they make you want to read on: “What Zhang “fetishizes” is primarily cinematography itself. If we speak of a narcissism here, it is a repeated playing with “the self”…” (9) Ciment’s reflections and Chow’s observations are borne out as we turn to the historical specifics of Berenice Reynaud’s 1991 set report in Sight and Sound: “Zhang and Zhao (Fei, DP) have bathed the place in a sensuous light, enhancing the effect of the red lanterns that hang everywhere…Zhang composes and rehearses his shots in an obsessional way; Gong withdraws into a sex goddess’s narcissistic solitude.” (10)

That film criticism, for Orr, is a melting pot of aesthetics, ontology, history, sociology and more, points to a legacy of tools and perspectives which is becoming as rich as the domain of domestic moving image consumption itself. Around 1959, Alain Resnais said that: “a classic film cannot translate the real rhythm of modern life…modern life is fragmented, everyone feels that.” (11) If in that cinematic annus mirabilis it felt as though experience, the stuff movies are made of, was becoming less and less coherent, 42 years later our lives are all the more atomized. And so are our experiences of watching. Keep Orr and Taxidou near the VCR for it enables you to pick and compare theories and readings of films as assiduously as we pick and mix our viewing experiences.

Unfortunately, however, these exacting writers have been let down by the proofreaders. The misprints are legion. Some of them are unthinkable: Racing Bull…The Day of the Condor (Three Days of the Condor)…David Jarrat should be Farrar…and Modleski’s entry derives from The Women Who Knew Too Much (1988). Not The Woman Who Know Too Much (1998). The stills seem arbitrarily chosen. This is a real pity for such a worthy book.