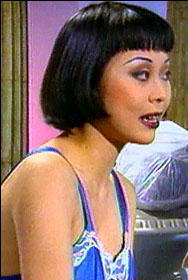 A film titled Sex. It cannot get more explicit or sensational than that. Why choose to be so blunt and crude? In order to shock and attract viewers or because this documentary is actually about sex and other issues around this divine, ongoing controversial topic. Exploration of sexuality, satisfaction of sexual appetites, pushing all boundaries beyond the missionary position and claiming a woman’s right to enjoy sex as much as a man does is Annabel Chong’s story. A frank and profound insight into the personal journey of a young Singaporean scholar turned porn star Grace aka Annabel Chong who takes us to her hell and back in order to heal herself from the tribulations of her past and her oppressive ethnic background. 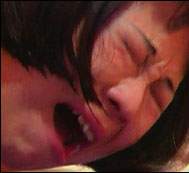 Annabel, aware of the prejudices floating in the room is honest and blunt: why not?, she confronts the majority of the audience, who feel embarrassed simply at Annabel’s openness.

Often we see Annabel as the academic confident enough to argue about her sexuality within the Cambridge Debating Club. Upright and proper, she reclaims her right to be a female stud and to discover her sexual powers.

Her lifestyle and behaviour indicate how much she enjoys being an extrovert, a sexual deviant who is searching to stretch all sexual boundaries. At a supermarket we are aroused as we watch her buy the largest zucchini and we laugh at her t-shirt which spells “Slut” across her breasts. We see her playing the sex kitten by laying naked at the promotional press conference pushing her sexual assets on to the screen.

Family, friends, teachers and colleagues tell us how much they admire her and how determined she always was. Annabel is the new feminist icon who provokes and is not ashamed of showing her body to be viewed as nothing more than an object, assurance she acquired while modelling naked in order to finance her studies.

The promoter shifts the blame upon her entourage and greedy gold diggers while he still owes her an outstanding fee. Reality bites her in the face when copycats out-do her efforts and she quickly loser her crown.

AIDS and other sexual transmitted diseases could be her next enemy as she was promised most guys were tested. Disillusioned, Grace physically harms herself to override the emotional pain from inside. Her sense of being betrayed is crushing. Slashing her arms with a knife feels more tragic than the pain from triple penetration.

Her attempt to distance herself from the industry takes her back to London where she was gang raped after getting off the Tube at a wrong stop. Her reunion with her family makes her look almost like a lost child. Her sentiments behind the tears that she shares with her mother bring you closer to the oppressive cultural expectations of Singaporean society. It makes you understand why she needed to overcome negative experiences through sexual liberation. Her mother’s faith in her is also very emotive and empowering.

The final image, pain in her eyes and sweat drops as tears as she completed her mission, left us to watch and feel how she would have felt at the end of the rape.

The film did receive loud responses from the audience I saw it with recently in Melbourne. Amongst the laughs and giggles, sighs and comments under anxious breaths voiced disapproval. The presence of so many Asian faces glowing with opinions overwhelmed me. Whether they identified with or condemned Annabel’s story is their journey.