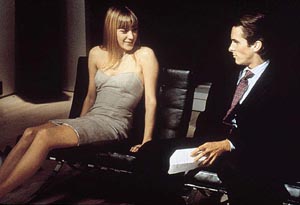 Bret Easton Ellis’ American Psycho (1991) is his second novel adapted for the screen. American Psycho is one of the most significant works of late 20th century American literature. It recreates the social landscape of the 1980s, a world in decline with little or no moral complexity, a society based on monetary power and preoccupied by excessive consumption, pragmatism and conformity. American Psycho is first and foremost a period work about urban life in the 1980s, seen through the eyes of a serial killer. Nevertheless, Ellis’ satirical social commentary also suggests numerous contemporary resonances of the not so distant era in which the novel is situated, revealing the continuous decline of the culture that has blatantly traded its vision for the trinkets of late capitalism.

Ellis’ allegorical tale evokes familiar narrative models from the past. Georg Buchner’s 19th century play, Woycezk, and its successful 1980s re-incarnation, David Mamet’s Edmond, also focus on a confused, violent and misogynic male character who embodies societal contradictions and fails to control his unleashed, rage-filled aggression. However, unlike his theatrical predecessors, Ellis uses his central protagonist’s inability to control his violent urges to create a revealing portrait of a late 20th century monster, an allegorical figure of the American Nightmare.

Patrick Bateman (Christian Bale), a 27 year old Manhattanite, is Vice President of the stockbroker firm, Pierce & Pierce. Perfectly groomed, outspoken, dressed in designer clothes and seemingly self-assured, Bateman is an ironic personification of the Wall Street Übermensch. The director Mary Harron (I Shot Andy Warhol [1996]) shows Bateman spending his working hours watching television, browsing through pornographic magazines, and organising drinks and restaurant bookings with rich socialites and business partners. In this claustrophobic environment, marred by emptiness and obsessed by greed, relentless competition, hedonism and desire for stimulation, a business card is the sole evidence of spiritual and emotional identity, and the ability to book a table at a high class restaurant brings a triumphant sense of achievement. Faceless and desensitised, bereft of love, family or real friends, Bateman is obsessed by physical perfection and preoccupied by the desire to ‘fit in,’ desperately trying to look and behave like every other businessman in his circle. He succeeds in creating a personality that blends in with his environment; his friends and fiancee fail to notice the signs of his psychotic behaviour and his lawyer can’t even recognise him. Bateman’s inability to disclose his emotional self and control his urges, transforms him into a psychotic murderer, randomly targeting his acquaintances, unknown females, prostitutes, the homeless, destitute and unprotected. As Christopher Lehmann-Haupt of The New York Times noted, “Patrick Bateman lives in a morally flat world in which clothes have more value than skin, objects are worth more than bones, and the human soul is something to be sought with knives and hatchets and drills.” (1) As the story progresses, the lack of narrative causality, the accompanying music, dialogue and artificiality of props and setting make Bateman’s sadistic killing sprees surreal and the audience gets the impression that they are, at least partly, figments of his imagination. Yet, instead of playing with audiences’ expectations, or drawing clear demarcation lines between fiction and ‘reality,’ Ellis examines the narratives that form the culture and society in which the gruesome acts of violence, committed in fits of narcissistic rage, seem cathartic and even pleasurable.

The overwhelming majority of violent scenes in American Psycho are charged by a sexual undercurrent. It is not surprising that those who took Ellis’ text literally criticised the novel for its misogynic content and ‘glamorisation’ of physical and sexual violence. Instead of concentrating on the graphic scenes in the text, Mary Harron and scriptwriter Guinevere Turner accentuate the unseen, implied violence with a meticulous sense of narrative rhythm and precise dialogue in which subtext is everything. Minor dramaturgical inconsistencies and problems in characterisation do not affect the narrative continuity or the important nuances in the screen adaptation. Bateman’s first murder, the balletic, cartoonish mutilation of his mirror image, Paul Allen (Jared Leto), suggests a strong satirical note, manifested in the killer’s clinical precision and his bleakly comedic dance macabre. All other murders in the script are deeply disturbing, as Andrzej Sekula’s naturalistic photography, sensitive to detail, produces poignant miniatures of Christie, the prostitute (Cara Seymour), Elizabeth (Guinevere Turner) and other victims of Bateman’s rage. The period music mainly focuses on a range of popular upbeat hits of the 1980s, the songs of Genesis, Phil Collins, Huey Lewis and others, capturing the spirit of the era. Harron points out that Bateman perceives these songs as a reflection of his inner self, but alsosuggests that they, in turn, inspire his fits of sadistic frenzy (2) The accompanying music by John Cale contrasts the brightness of the satirical musical compilation of the 1980s with a melancholic mood that hints at the darkness of Bateman’s psychic universe.

Christian Bale’s Patrick Bateman personifies the insane consumer drive and joviality of the 1980s, combined with the brutality, callousness and psychotic urge of a serial killer. Bale’s voice, accent, gestures and precisely choreographed movements produce a powerful vision of an urban monster, inviting the audience to examine his motives. The portraits of Bateman’s secretary, Jean, the most profoundly emotional character in the film, played by Chloe Sevigny, and the murdered prostitute, Christie, emerge as two masterful vignettes of women tragically implicated in Bateman’s fantasies who recognise the true nature of his nightmarish addiction. Jared Leto (Paul Allen), Reese Witherspoon (Evelyn Williams), Samantha Mathis (Courtney Rawlinson) and Matt Ross (Luis Carruthers) create a gallery of cold and uninspiring characters, sanitised by greed and spiritual emptiness and unfazed by the plight of those less fortunate. Willem Dafoe plays detective Donald Kimball, who emerges as a figure of fragile, diminishing moral authority, besieged by everyday trivialities, immersed in procedural conundrums and restricted by his fears and conformity.

Today, as Bret Easton Ellis’ work takes place on the map of American culture, his novels emerge as powerful testaments about dominant social forces in the last decades of the twentieth century. Harron’s screen adaptation of American Psycho blends the gruesome tale of urban violence with Ellis’ ferocious critique of the period that legitimised the greed, ethical degeneration and dreams of omnipotence, powerfully personified in the tragic figure of Patrick Bateman. The television appearance of Ronald Reagan at the end of the film, ironically heralded by the title of one of the pornographic videos in Bateman’s collection, returns the film to the sphere of social commentary, evoking the lies, hypocrisy and delusions of grandeur which potently distorted the American public discourse. The last words in Ellis’ novel, prominently displayed in one of the bars frequented by the Wall Street clientele, resonate a sense of despair and disillusionment as the sole legacy of this era, implicating the reader and the audience in America’s continuing journey through nightmare: THIS IS NOT AN EXIT.