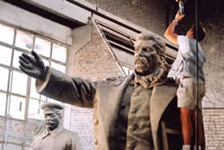 Although Thessaloniki has a relatively long history as a film festival, it was not until 1991 that it expanded beyond being anything more than a national event, particularly in terms of its programming. The Greek element is still strong (and, indeed, more prominent than, say, the Neue deutsche Filme section at Berlin or the Czech film section at Karlovy Vary), but the Festival is now a showpiece for films from all over the globe, with this year’s competition including works from Japan, France, Italy, the US and the UK and a survey of new Argentinean film on offer, amongst other delights. Despite the breadth and intelligence of world cinema on show, Thessaloniki really sparkles as a showcase for regional cinema, and many of the local films presented are unlikely to be screened widely at other international events.

The Balkans have, of course, come to some prominence in recent years; although sadly this is mainly due to negative news—political extremism, failing economies, cyanide spills and shooting of a decidedly non-cinematic kind. This kind of coverage has done a good job in masking the fact that most of the Balkan countries have rich and distinctive film traditions. Although production has undoubtedly been reduced since the fall of Communism, the cinematic tradition of the region has become lost in the West’s “only bad news is interesting news” approach to reporting on the countries of south-eastern Europe.

Beating off the competition

Balkan film was represented at Thessaloniki by the Balkan Survey section, inaugurated in 1995 as a celebration of regional film in reaction to the turmoil of the Yugoslav wars of succession. However, there was also a significant presence in the international competition, with four films from former Communist countries, three Greek films (two of them international co-productions) and one from Turkey. In some sense, though, it seems pointless to draw any dividing lines in the competition entries, as there was as much to unite them as separate them. The jury, in a prepared statement, found much to tie the selection into a cohesive snapshot of the world in 2001 as seen through film. They praised all the directors for their “passionate engagement” with their subject matter and commented on the recurrent themes of exiles, dislocations and political divisions, the presence of much wit and an overall lack of poetic cinema.

Reflecting these observations, the jury awarded the main prize, the Golden Alexander, to a film which is a plea by the director to his compatriots “not to leave their native land”—Tirana Year Zero (2001) by the Albanian director Fatmir Koçi. The film, a drifting road movie that squarely presents the violence and decay in Albanian society, follows a young couple: Klara, wishes to emigrate, but her boyfriend, Niku, can see no point. Despite the overwhelmingly negative view presented of Albanian society (something that gave the film a rather heated reception in its homeland), it is Niku who wins out.

Meanwhile, the FIPRESCI jury were rather taken by the Romanian Marfa si banii (Stuff and Dough, 2001), directed by Cristi Puiu, awarding it their prize for the best film in competition. Like Tirana Year Zero, the film takes a similarly uncompromising view of contemporary society, with the central character played by a dozey young man who is offered the chance to make huge amounts of money in a single day by delivering some suspicious-looking packages to an address in Bucharest. Using remarkably little plot material, the film is artfully constructed through the small talk of the characters and is notable for the formal quality of being almost entirely shot on location in the confines of a moving van. 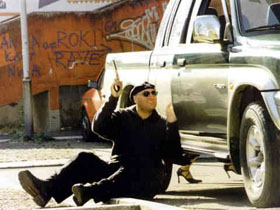 On the other hand, the audience took a fancy to Srđan Golubović’s Apsolutnih sto (Absolute Hundred, 2001). All doey-eyed innocence and fuelled by a Travis Bickle-style sense of social justice, Saša Gordić, the film’s hero, is the Yugoslav junior marksmanship champion. Unable to watch his war vet brother’s humiliating descent into heroin oblivion and the attendant manipulation by the drug’s pushers, young Saša decides to take matters into his own hands. Originally conceived under different political circumstances, the film nevertheless manages to avoid being a relic of the Milošević era, thanks to its clear, compelling story-telling and convincing characterisation. Even the irritating and primitive camera effects that punctuate the film (Golubović makes commercials and music videos to make ends meet) fail to mar this tragedy with an optimistic end.

Jan Cvitkoviè’s Kruh in mleko (Bread and Milk, 2001), a dark voyage into the alcoholic heart of small-town Slovenia, failed to pick up any awards. However, given that the film won the Young Lion of the Future prize at Venice earlier this year, the director is unlikely to be complaining too heavily.

The themes evident in the main competition were continued in the Balkan Survey section, where eleven films were on show. Mirroring the predominance of wit in the main selection, at least four of the Balkan Survey films could theoretically be classified as comedies. The tag, however, would be slightly misleading given that all of them actively engaged in social or political commentary.

The film that fitted most firmly into the comedy genre was Croatian Dalibor Matanić’s Blagajnici hoće ići na more (The Cashier Wants to Go to the Seaside, 2000), which follows the attempts of a cashier in a supermarket to persuade her dodgy boss that she deserves a holiday to take her sick daughter to recuperate on the coast. It is also a romance, but all sentimentality was reserved for an ironic Lassie pastiche ending. The remainder of the film’s running time was made up of acidic (and frequently hilarious) stabs at the criminality inherent in contemporary Croatian society.

Faruk Sokolović’s Mlijeèni put (Milky Way, 2000), only the third film to be produced in Bosnia since the end of the war in 1995, also mitigates its saccharine effect with an incisive exposé of the lives of ordinary people in Sarajevo. The ordinary people in question are two couples, one Croatian and one Muslim, who try to circumvent the emigration rules by swapping partners to get the coveted “mixed marriage” status for their paperwork. In contrast to Matanić’s offering, the punch is reserved for the ending in this absurd and occasionally slapstick film

Slogans (2001), by Albanian director Gjergj Xhuvani, is a more subtle film, with its humour used to illustrate the absurdities of life and the impracticalities of love under the regime of dictator Enver Hoxha. The love interest and jokiness in the Slovene film Oda Prešernu (Ode to the Poet, 2001), by Martin Srebotnjak, on the other hand, is largely secondary, and the main thrust of the film an exploration of the way “national” culture is abused by officialdom.

Most films by Balkan directors are low budget affairs. Two films on show in the Balkan Survey section, however, were international co-productions with the big bucks (in relative terms at least) out on show—Milèo Manèevski’s Dust (2001) and Goran Paskaljević’s How Harry Became a Tree (2001).

Dust, a Sam Peckinpah-style Wild “Eastern” set in turn-of-the-century Macedonia and present-day New York, has been eagerly awaited by all those who saw the director’s debut, Pred doždot (Before the Rain, 1994). The anticipation was somewhat dented by the hostile reception Dust received when the largely British-funded USD 16 million film was the gala opener at Venice this year. Critics almost universally derided its naïve and unconvincing plot, and at a Venice press conference Manèevski refused to respond to allegations that the film’s anti-Turkish sentiments made it racist. A matter of days later, Manèevski (in a strop reminiscent of Emir Kusturica) let slip in an interview that the film might be his last. Nevertheless, the public screening I attended at Thessaloniki was packed to full capacity. The mood when the lights went up at the end, however, was less than buzzing.

Goran Paskaljević, most famous for Bure baruta (The Powder Keg / Cabaret Balkan, 1998), stayed clear of Serbian producers to make How Harry Became a Tree, which makes being lacklustre seem positive against the offensiveness of Dust. This Irish / Italian / British / French co-production is set in 1920s Ireland and based on a Chinese tale of a man who defines himself by his enemy and in doing so alienates his son and brings about his own downfall. However, you never escape from the feeling that Paskaljević really wants to shoot a story about his home town, Belgrade, and the excessive Irishness of it all and the overly melodramatic score irk. Moreover, the acting is mixed, with the stronger performances seeming to be coincidental rather the result of directorial skill in bringing out the best in the actors.

A third international co-production by a mature director was Lucian Pintilie’s Dupa amiaza uniu tortionar (The Afternoon of a Torturer, 2000), which shows the attempts by Frant Tandara, a bee-keeper and erstwhile torturer in a Romanian prison, to confess his crimes to a journalist, to the shock and dismay of his relatives. It’s a more modest film than Manèevski or Paskaljević’s in terms of budget and setting, but one whose themes are more cohesive. Based on the true-life story, it’s been a controversial film in Romania (Pintilie, through use of the camera’s view, equates both the torturer and the journalist with God), and one that has led the Romanian Minister of Culture to lash out against the director. Despite its raw subject matter, it’s unlikely to grip international audiences to the same extent as some of the director’s previous films dealing with the horrors of the Ceauşescu era, such as Balanta (The Oak, 1992).

That Thessaloniki as a Festival is a huge success goes without saying: any event that can keep going for 42 editions has to have something to it. The range of international guests (including Faye Dunaway, John Boorman, Jerzy Skolimowski and Pawel Pawlikowski) also point to the respect in which it is held. But the Festival is also successful in other terms. With Communism now well and truly dead and Milošević about to be tried in the Hague, regional stability could be on the horizon. Greece—long one of the poorest countries in the EU, sticking out in awkward isolation from the rest of the Union—is well aware of this and is anxious to carve out a role for itself. Now the roles are reversed, and the country is finding itself the rich relative to the Balkans.

Thessaloniki, Greece’s second city and located less than 100km from the Macedonian border, is an important part of this new equation of power in cultural terms. The Festival’s imaginative programming of Balkan film is one manifestation of this, but more interestingly is the money the Greek government is putting into the promotion of regional cinema. The South Eastern Europe Cinema Network held their first general assembly at Thessaloniki during the conference, and at a press conference announced that a permanent office for the Network in Thessaloniki had just been opened and that the Greek government would contribute a seed EUR 50,000 (USD 45,000) to establish a funding programme for promoting Balkan film. In addition, the Greek Film Centre funded the publication of the Network’s Film Professionals’ Guide, a meaty industry directory for the region. The Greeks are clearly banking on the future benefits of being a regional hub.

If the Balkans do stabilise, one would hope that their cultural output will increase in quantity and quality. And if Balkan film can regain the respect it was once held in and extend that to a wider audience, Thessaloniki may well find that it increases in importance as a film festival.