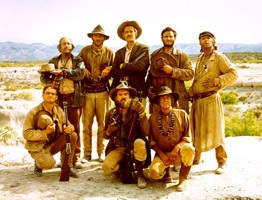 Although its violent reputation may seem anachronistic by today’s standards and possibly surpassed by “rednecked peckerwood” imitators such as Quentin Tarantino, The Wild Bunch still remains unsurpassed as one of the great Westerns of the last century. Following Peckinpah’s ideological assault upon the conventions of John Ford’s cavalry trilogy in the mutilated, but still resonant, Major Dundee (1965), The Wild Bunch continues his brutal interrogation into the pathological nature of American masculinity and society – making his film more relevant now than ever. Jim Kitses sees the film as a dark vision of the American experience, succinctly expressed in his monumental sentence, “The Wild Bunch is America” (1). Others have noted its allegorical associations concerning the Vietnam War (2). But The Wild Bunch uniquely revealed the redundancy of nostalgic myths of the Frontier as well as unveiling the dark side of those American imperialist ambitions also documented by Gore Vidal in his historical novel Empire (1987). Peckinpah continues his ironic demolition of Ford’s West by again using his mentor’s favourite hymn, “Shall We Gather at the River”, before the first massacre in The Wild Bunch, as well as casting Ford icon Ben Johnson in a darker version of his Ford roles. Peckinpah knows his traditions. But there is no “anxiety of influence” operating here. Instead, Peckinpah depicts his own era’s age of anxiety by revealing the bankruptcy of certain ideological formulas that influenced his predecessors. In Vera Cruz (1954), Robert Aldrich anticipated Peckinpah by depicting American mercenaries in Mexico but not in the same apocalyptic and political manner. Stylistically, Akira Kurosawa’s The Seven Samurai (1954) and Arthur Penn’s The Left-Handed Gun (1958) influenced Peckinpah. But he extended those influences in more creative and dynamic ways.

After The Wild Bunch, Peckinpah became dogged by such monikers as “Bloody Sam” or the “Master of Violence” (3). Yet, as Stephen Prince has shown, the director actually intended to make his audiences confront the horror of screen violence. Although he largely failed in this endeavor, this is less his own doing than the result of the powerfully spectacular conventions of cinematic violence which routinely undermine the best intentions of any director (4). In Straw Dogs (1971), Peckinpah certainly achieved his aim of audience alienation by placing violence within a narrative context “marked by despair, melancholy, and suffering” and by distancing viewers “from their own excitement and enjoyment of the aestheticized violence” (5). But he also framed his violent set pieces within a particular context designed to counterpoint and question the violence depicted on the screen. Thus, according to Bernard F. Dukore, the initial spate of confronting violence in the town of Starbuck lasts some three minutes and 48 seconds while the more detailed, apocalyptic Agua Verde slaughter runs for five minutes and ten seconds (6). Although these spectacular scenes of screen violence may carry some audiences away, contradictory elements appear in both the prologue and concluding epilogue, as well as within the sequences themselves. Dukore notes that Harrigan and the bounty hunters who, ironically, represent capitalism and the law, actually “inflict deadlier havoc on the civilians than the Bunch does” (7). But the Bunch is not free from blame.

To prevent the audience from overly sympathizing with the Bunch as victims, Peckinpah cuts from the relatively exterior slaughter to the relatively calm but grotesquely deadly interior of the bank, where Crazy Lee holds hostage three clerks and a woman. Most of these interior shots, in which one of the Bunch is a victimizer, last longer than shots of the mayhem outside. (8)

The sequence ends with Deke Thornton (Robert Ryan, the nominal leader of the bounty hunters) looking on in disgust at the slaughter Harrigan instigated.

Although the Agua Verde gunfight lasts for over five minutes, Dukore notes that the sequence precipitating Pike’s (William Holden, the nominal leader of the Bunch) growing disillusionment, and leading to the Bunch’s decision to live up to ideals they’ve probably never followed before in their entire lives, actually runs for seven minutes and two seconds. If we include the touching sequence involving Pike and the young prostitute – who represents the life he will never have (a momentary revelation similar to Jack Carter’s look at a mother and two children in the Wallsend Ferry sequence of Mike Hodges’ Get Carter, 1971) – the resonances are even stronger. These scenes form an important prologue leading to a massacre that begins when Pike decides to shoot Colonel Mohr after avenging the death of Angel by killing Mapache (Emilio Fernandez). Despite the exhilarating nature of the sequence, Peckinpah also undermines Pike’s brief moment of glory. Pike shoots a man hiding behind a mirror, a surrogate for the “dark figure” who killed his only true love, and who has haunted him ever since. But Pike’s victory is undercut when the victim’s woman then shoots him in the back! Pike then turns and shoots her, uttering the derogatory epithet “Bitch!” Although he may believe he has exorcised his particular demon, these circumstances are completely different to the events and actions he is trying to erase (9). His personal victory is ironically undermined here. But whatever motivations influence the Bunch they die in solidarity with each other and “surely are better human beings than their antagonists who torture for pleasure” (10).

The film’s violence is not gratuitous. It is worlds apart from the later Hollywood appropriations by Oliver Stone, Tarantino, and others. Paul Seydor’s classic study of Peckinpah’s westerns reveals the importance of the technical and moral factors influencing the director’s particular choice of style:

The slow-motion intercuts with their hypnotic allure distance us from the action by aestheticizing it, thus intensifying aesthetic feeling as such but ameliorating any vicarious experience we might have of the physical sensations the action produces…. Peckinpah developed a technique that tends to divorce feeling from sensation (which is what makes his art so seductive, hence disturbing) and that enables him to strike exactly the right balance between an emotional, indeed an almost palpably physical proximity to the violence and an aesthetic distance from it. (11)

The poignant nature of the epilogue should also be considered. It begins with Thornton and the remaining bounty hunters arriving at the scene of the massacre where hundreds have died. While Thornton views Pike’s body, Coffer and T.C. look for plunder. These “peckerwoods” represent Peckinpah’s dark court jesters, symbolising the depravity lurking beneath and around the Bunch (who have now redeemed themselves). The Bunch finally “do it right” for the one and only time in their lives. Having fulfilled his bargain with Harrigan, Thornton decides to remain, knowing full well what will soon happen to his depraved “deadly companions”. Sykes arrives with revolutionaries who will benefit from the Bunch’s Last Stand. The two surviving members decide to ride the “high country” again. As Sykes tells Thornton, “It ain’t like it used to be… but it’ll do”. His modest statement suggests that it will more than do. Butler appropriately recognises that the survivors now have an opportunity to do something constructive: “The Wild Bunch’s drama of pain over, it seems possible for men to be bound together by a common brotherhood.” (12) As Sykes and Thornton ride off into the distance, they join the revolution and continue the movement their flawed and deceased counterparts began. The image dissolves to the dead members laughing in solidarity as if acknowledging the implications of the decision. This laughter is no attempt to redeem depraved heroes. As Christopher Sharrett states,

it suggests quite simply that the path of the Bunch always led to this moment. The final image, the Bunch’s entry into Valhalla (with the strains of “La Golondrina” describing a complete utopian space), is Peckinpah’s most romantic gesture, but the contradictions are again poignant and compelling. (13)

Admittedly, this is a peculiarly utopian conclusion for a director whose vision generally became bleaker and pessimistic as his career wore on. The village scenes appear early in the film. They represent a brief, but soon-to-be lost, Edenic moment that the Bunch will never experience again. However, although Sharrett sees the film as representing “an American idealism long since corrupted, its energies spent, its politics turned into exaggerated individualism” (14), the significance of this scene should not be underestimated – the Bunch become heroes remembered by a community. Their actions will enable it to survive now that Mapache is dead. The Bunch now represent ironic images of that American Adam that has haunted their national literary tradition for so long. Now dead, their legend may inspire others in a different world far from an America corrupted by Harrigan and a Mexico threatened by Mapache and his German imperialist allies. However, Peckinpah concludes the film on a freeze-frame and subsequently diminishes its size. He deliberately uses another 20th century technological device, like the automobile seen in Mapache’s camp and the machine gun used in the final bloodbath. The Bunch may pass into legend. But Peckinpah’s use of this final cinematic device also qualifies the optimistic nature of his conclusion. The positive implications left by this particular legend may encounter marginalisation within the dark world of the 20th century that Peckinpah documents in his non-western films. At the end of Ford’s The Man who Shot Liberty Valance (1962), the newspaper printed the legend. The Wild Bunch concludes with an image produced by an optical printer, diminishing the poignancy of a utopian legend in size even before the credits conclude.