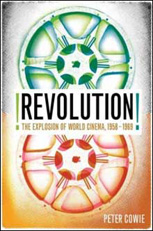 If the word “revolution” in Peter Cowie’s title functions to hint at the complete artistic and expressive renewal that filmmaking began to undergo during the ’50s, and more drastically, the ’60s, then the exclamatory mark that accompanies it not only reinforces the impact of this word’s signification, but also mutely conjures the mood of surprising possibilities that erupted at this time into global cinema with such dazzling force.

A critical history of sorts, Revolution! is something more vital than either criticism or history. Cowie has chosen to focus on the films and filmmakers that he feels characterise the ’60s cinematic revolution, but equally to re-visit and re-animate those films and filmmakers that affected him most. He wrote to me: “I sought out filmmakers who had meant a lot to me during the ’60s, even if they might have receded into obscurity since”. Filmmakers like John Korty, Vilgot Sjöman, and Richard Lester. For an era that witnessed a florescence of intensely personal autobiographical films, Cowie’s approach seems appropriate, an irrefutable witness in itself you could say of the imprint that the ’60s left on his own formative and transformative years.

Yet despite this strong personal element, or perhaps because of it, Revolution! has a noticeably undogmatic quietness of tone. Cowie employs a consistent strategy of slipping to one side in order to let the film directors speak for themselves through a series of interviews. These interviews, conducted with directors including Pontecorvo, Rosi, Bertolucci, Wajda, Resnais and Reisz, form a large and integral part of Revolution!, resulting in a text which resembles a fusion of times, places, people, events and films, a long fragmented discursive multi-perspectival record. The interviews encompass everything from discussions concerning the making of particular films to cinematic influences, from descriptions of the changing political climate to enriching details such as Forman’s account of his run-in with the communist censors. And they generate a set of meanings which are unusually rich. This intersecting and expanding pattern of meanings constitutes the central activity of Cowie’s book: an attempt to engage with what ’60s cinema means, with what it meant then, both to Cowie personally and to the directors whose voices dominate the book, and what it means now.

Cowie suggests two ways of looking at and remembering ’60s cinema: the first as an Age of Enlightenment, the second as an Age of Anxiety. Cowie himself tends towards the conviction that the latter is the “more justifiable epithet” (p. xii). But despite the fact that Cowie chooses anxiety and not enlightenment as the pivotal feature of ’60s cinema, it is interesting to note that the very place he most openly attempts to articulate this anxiety is also the place that he most clearly reveals its inseparability from a concept of enlightenment. “All over Europe”, he writes, “directors gazed, Narcissus-like, into the navel or the mirror, questioning their role in society, and even – like Guido in Fellini’s 8½ – their profession as film-makers” (p. xii). Paradoxically, when Cowie attempts to describe the anxiety that caused filmmakers to engage in a radical reassessment of their role and profession he does so through a metaphor of awareness that combines “enlightenment” (gazing into the navel) with an intense sense of the uniqueness of one’s self (gazing Narcissus-like into the mirror). From a purely textual-syntactical perspective, Cowie’s phrase here twines images of “enlightenment” and “self-awareness” together. But also, from a conceptual perspective, it establishes a vital relationship between the liberating awareness that informed ’60s cinema and the intense individuality of its filmmakers on the one hand, and what can be viewed as their creative anxiety on the other. This rather complex relationship between enlightenment, self-awareness, anxiety and creativity is overtly and covertly scattered throughout Cowie’s text.

Erich Fromm has exhaustively dealt with an analogous relationship in a series of psychological works. In Fromm’s work the sense of being an individual is accompanied by a double awareness in which freedom and fear are inextricably woven together. He hypothesises that the emergence of individuality involves a psychic freedom from the nurturing oneness of nature or society which is inevitably accompanied by a fear of standing alone in the face of an overwhelming universe. But whereas Fromm is concerned with explaining the dynamics of this relationship between an awareness of individuality and anxiety, Cowie is not. Cowie’s text consistently hints at a link between an anxiety based on intense individuality and the profound creativity of ’60s cinema, but he does not attempt a systematic exposition of this link. Rather he express is as a silent implication. Thus, when Cowie talks of a scene in Five Easy Pieces (Bob Rafelson, 1970) where Jack Nicholson breaks down in tears while talking to his wheelchair-bound father, he pinpoints the inarticulacy and anxious struggle to find a means of personal expression both in front of and behind the camera that prevailed during this era.

The mute manner in which this struggle informs Cowie’s interests is also reflected in the still images (ranging from 1948 to 1971) that he has selected, most of which evince an undertow of disquiet and potential danger. In addition to this, it is hard not to notice the frequency with which images containing cameras or guns occur. Perhaps this is due to the workings of chance, but Freud has suggested that chance, in such contexts, can be viewed as the invisible toss of the die of unconscious mental operations. The camera and the gun can enter into a symbolical exchange of meanings, not only because they are linguistically, and thus conceptually, linked by a Freudian quirk of language which speaks of both as being “loaded”, and expresses the activity of both as “shooting”, but also because of the way in which Cowie himself consistently joins the visionary power of ’60s cinema to its questioning and disquiet.

The complex relationship between liberating awareness, intense individuality, and creative anxiety generates an invisible centre of attraction around which Cowie’s exploration of the meaning of ’60s cinema revolves. Certainly in terms of the legacy of ’60s cinema, Cowie continually returns to touch upon the thought that the “troubling relevance” of these films lies in the personal disquiet that emanates from them, and in the challenge that they throw down to all established and honoured complacencies, and that it is these elements of “threat” and “reproach” (to borrow the terms that Cowie borrows from Lindsay Anderson) with their sense of danger and their whiffs of desolation, that have come to constitute the profounder and more enduring influence of the ’60s cinematic revolution.

Revolution! The Explosion of World Cinema in the Sixties, by Peter Cowie, Faber & Faber, New York, 2004.