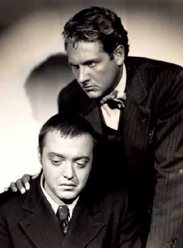 Film lovers who are loyal to the notion of auteurism will automatically think of Crime and Punishment as belonging to Josef von Sternberg, but they would be mistaken. This version of the Dostoyevsky classic is Peter Lorre’s, a vehicle for the actor’s particular talents. After the box-office failure of The Scarlet Empress (1934) and the political suppression (due to complaints by the Spanish government) of The Devil is a Woman (1935), Sternberg was banished from Paramount. As David A. Cook reports: “This was the end for the director. Destroyed by his refusal to compromise with the studio system and by his own profligate style, his contract was cancelled” (1). Crime and Punishment, for him, was just an assignment (2), but for Lorre, born to play Raskolnikov, it was a cherished project. In fairness to both artists, I think that is how the film should be viewed – a Peter Lorre tour-de-force ably assisted by Josef von Sternberg. In that light, it certainly deserves more credit than it has received – dismissed as “limp” in Cook’s A History of Narrative Film (3) and virtually ignored on the Internet. Faithful to the spirit and not the letter of Dostoyevsky (in my view, a requirement for a good screen adaptation), Lorre and Sternberg – with the able assistance of character actor Edward Arnold as Inspector Porfiry – created a Kafkaesque fable, presented to us in the timeless landscape of a disturbing dream.

According to Hal Erikson of Allmovie.com, the villain and rising star of Lang’s M and Hitchcock’s The Man Who Knew Too Much had his secretary type up a synopsis of the novel in words of one syllable and presented it to Columbia’s chieftain Harry Cohn (4). Allegedly, Cohn loved the idea and asked, “Tell me – has this book got a publisher?” Be that as it may, Lorre is showcased to great effect, using his villainous and creepy demeanour to create an anti-hero who is genuinely complex – disturbing and sympathetic at the same time, an obvious goal of Dostoyevsky’s source novel.

Lorre’s nuanced performance allows the film to capture the author’s key concerns which are essentially religious in nature. Eastern Orthodox values, as Russians tend to interpret them, can be strange and even incomprehensible to Westerners. However, perhaps their living connection with Eastern Europe helped Lorre and Sternberg to understand and accurately depict these values. Secret humility and repentance coupled with a redemptive view of suffering, in Dostoyevsky’s mind, result in the merciful championing of the most abased characters. St. John of Kronstadt (a contemporary of Dostoyevsky and priest to Czar Alexander) writes, “Humble yourself inwardly before everybody, counting yourself lower than he or she” (5), and Dostoyevsky’s treasured St. Isaac the Syrian says, “When he sees all men as good and none appears to him to be unclean and defiled, then in very truth his heart is pure” (6). Dostoyevsky himself writes in his journal regarding Crime and Punishment,

The Idea of the Novel
1. Orthodox View. What Orthodoxy is.
2. There is no happiness in comfort. Happiness is purchased by suffering. (7)

The film is filled with moments that are difficult to understand unless one is familiar with these basic underpinnings and motivations. For example, Raskolnikov gives away money he doesn’t really have and refuses to explain to the Inspector his sudden good fortune. Raskolnikov is not only motivated by misguided Nietzschean/Napoleonic arrogance, he is also motivated by love twisted with despair.

The novel is so much more than just a guilt trip, and Lorre’s supple face and body language brilliantly capture these complex themes, shifting from elation to despair and from paranoia to bravado in a way that indicates a deep understanding of the Russian spirit as embodied in Raskolnikov. The brilliant performance of Edward Arnold as the Inspector and the subtle cat-and-mouse game portrayed by him and Lorre can only be properly understood in all its layers in this Russian context. The Inspector truly loves Raskolnikov and is seeking to redeem him rather than merely apprehend him. Between them are moments of black comic brilliance, and the interaction between the two is one of the greatest performances by a duo in the history of cinema.

As for Sternberg, he may have been down, but he was certainly not out. This third outing in Russia doesn’t offer the baroque visual thrills of The Scarlet Empress but, in its own way, its lean austerity is a mythopoeic “painting with light” (8). Erikson claims that “the story is subtly updated, though any distinctly ‘contemporary’ touches such as automobiles, telephones and current slang are studiously avoided” in order to “make the film even more accessible to a mass audience” (9). This may have been the original intent, but I see it as an effective decontextualisation in order to place the story into the realm of universal myth and recurring nightmare, giving it a timeless, placeless quality that makes us all Raskolnikov and its images perpetually relevant. Lorre is dwarfed by the shadows on his staircase, and time and again he steps malevolently out of darkness into light. In the closing scene the shadow of an imperial eagle/cross falls onto his chest creating an effective symbol of judgement and mercy. A favourite moment of mine has a slouching Lorre rising and stepping aside to reveal a portrait of a slouching Napoleon who looks suspiciously like Peter Lorre.

We watch Crime and Punishment with the luxury of having both artists’ complete work available to us. Peter Lorre and Josef von Sternberg carry an artistic resonance with them that through juxtaposition adds rich levels of meaning and aesthetic pleasure to this little seen film. For us, all of Lorre’s character’s, from M‘s Franz Becker to Mr. Moto to Joel Cairo and Ugarte, can be layered onto Raskolnikov to great effect, and, for me at least, it is impossible to watch this film without remembering the angry visual critique of Czarist Russian decadence found elsewhere in Sternberg’s work. There is a larger-than-life grandeur and lyricism that may not be entirely in the film itself but washes in from the rest of Sternberg’s oeuvre, and his grim world-view also informs our viewing. Their personalities and talents combine beautifully here to give us a neglected classic.