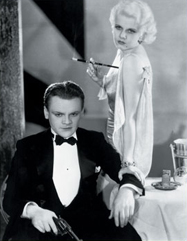 The author will be presenting a lecture on pre-Code Hollywood at ACMI on December 10, 6pm prior to the screening of The Public Enemy. For further articles on the Cinémathèque’s “Hazing the Hays Code: Hollywood’s pre-Code’ Era” season, please refer to this issue’s CTEQ: Annotations on Film.

Like many 1930s crime movies, The Public Enemy (1931) begins with an explicit statement of authorial intent: “It is the intention of the authors of The Public Enemy to honestly depict an environment that exists today in a certain strata [sic] of American life, rather than to glorify the hoodlum or the criminal”. This declaration of civic responsibility is usually regarded as an empty, cynical gesture intended to appease critics concerned at the movies’ “subversive” effects, but such an interpretation simplifies the complex and contradictory cultural position occupied by Hollywood’s representations of criminality in the early Depression. Contemporaneous reviews treated The Public Enemy‘s claim to provide “a sociological study” of gangland more seriously, endorsing its “remarkably lifelike portraits of young hoodlums” as “a hard and true picture of the unheroic gangster” (1).

The studio did not aim to produce either a sociological treatise or a socially subversive text, but the “roughest, toughest, and best of the gang films to date” (2). In the cultural climate of the time, its producers had to defend it against the persistent criticism that such movies were a source of inspiration for criminal behaviour. The editorial justification of The Public Enemy as a contribution to social debate was not, however, something tacked on to the end of the project to fool the censorious, but an integral part of the movie’s process of construction. As the script was being written, Darryl F. Zanuck, head of production at Warner Bros., argued to the administrators of the Production Code that “if we can sell the idea that … ONLY BY THE BETTERMENT OF ENVIRONMENT AND EDUCATION for the masses can we overcome the widespread tendency toward lawbreaking – we have then punched over a moral that should do a lot toward protecting us” from cuts at the hands of state and municipal censor boards (3).

No one who saw Little Caesar or The Public Enemy in 1931 saw them in a cultural vacuum. Embodying the metropolitan civic corruption that had been tolerated in the 1920s, the gangster had been an acceptable representative of anti-Prohibition sentiment in the popular press until 1929, but in the cultural catharsis of the early Depression he became a scapegoat villain, threatening the survival of social order and American values. This shift in public sentiment was most conspicuously charted in changed press attitudes to Al Capone, who had ceased to be the celebrated “Horatio Alger lad of Prohibition” long before his conviction for tax evasion in October 1931 (4).

Contrary to the mythology of a “pre-Code” cinema, the “classic gangster film” was in fact the product of only one production season, 1930-1931, and constituted a cycle of fewer than 30 pictures. The box-office success of The Doorway to Hell in late 1930 and Little Caesar in January 1931 triggered a series of imitations in a pattern typical of the industry’s exploitation of a topical cycle, but none of the pictures released after April 1931 were box-office successes. By then, exhibitors were reporting that audiences had had enough of gang pictures, while a plethora of civic and religious organisations complained that these movies continued to endow gangsters “with romance and glamour”. In response, the industry claimed that the movies were “deterrents, not incentives, to criminal behaviour” (5), “debunking” gangsters through “the deadly weapon of ridicule”, and stripping them of “every shred of false heroism that might influence young people”, most conspicuously through the use of ethnic stereotyping in casting and performance (6). After the New York censor board eliminated six scenes from The Public Enemy before permitting its release in mid-April, however, the MPPDA acted to curtail the cycle, establishing guidelines for “the proper treatment of crime” in pictures and eliminating scenes of inter-gang conflict and stories with gangsters as central characters.

The conventional critical identification of The Public Enemy with Little Caesar and Scarface as the trilogy of “classic” early 1930s gangster movies has encouraged a reading of its plot as if it portrayed the rise and fall of a gangster in Capone’s image. Unlike Little Caesar or Scarface, however, The Public Enemy does not depict the acquisition, exercise or loss of power. Tommy Powers (James Cagney) remains more hoodlum than gangster, occupying a subordinate role in the bootlegging business, not an organisational one, obeying instructions rather than giving them, and untroubled by any ambition to escape the neighbourhood.

Zanuck’s claim that the movie was “more biography than plot” was not, however, inaccurate: The Public Enemy might fairly be described as a composite biography of a neighbourhood criminal gang such as Chicago’s Valley gang, led by Patrick “Paddy the Bear” Ryan until his assassination in 1920. His protégés Terry Druggan and Frankie Lake became the first gangsters to distribute beer on a large scale in Chicago after Prohibition, providing Capone’s mentor John Torrio with a model of successful collaboration between bootleggers and respectable business. By 1924 bootlegging had made them millionaires, and Druggan boasted to the press that even the lowliest member of his gang wore silk shirts and rode in chauffeur-driven Rolls Royces.

The movie’s press book explicitly identified its two protagonists as being based on Lake and Druggan, but Tommy inherited his “sunny brutality”, his impulsiveness and lack of organisational prowess from press accounts of Northside gang leaders Dion O’Banion and Hymie Weiss, who were depicted as figures of local colour rather than as Capone-like businessmen. The beer wars between Capone and the Northsiders were most often represented as a conflict between two systems of social organisation, Capone’s mercenary capitalism against O’Banion’s dependence on loyalty, friendship and affection.

The movie borrows freely from the “factual” accounts of the O’Banion gang’s exploits, incorporating several incidents from newspaper reports of the lives of O’Banion, Weiss, and Louis “Two-Gun” Alterie. Most famous of these was the 1923 death of Samuel “Nails” Morton in a riding accident, and the subsequent (apocryphal) execution of the horse by either O’Banion or Alterie. After O’Banion’s assassination in 1924, Alterie vowed revenge by proposing a publicly staged shoot-out with O’Banion’s killers, akin to Tommy’s attack on Schemer Burns’ headquarters. Weiss was notorious for his evil temper and impulsiveness, and reports that he once pushed an omelette into a girlfriend’s face were cited as the source of The Public Enemy‘s infamous grapefruit incident. His assassination in the first “machine-gun nest” murder in October 1926 was recreated in the killing of Matt Doyle (Edward Woods).

Like other crime movies of the period, The Public Enemy omitted any substantial or detailed representation of what sociologists at the time described as the “unholy alliance between organized crime and politics”, in favour of their representation of the spectacle and melodrama of criminal performance (7). Tommy does become a member of the nouveau riche, dressing and driving in the style to which Terry Druggan’s gang became accustomed, and visiting as ritzy a nightclub as Warner’s set budget would allow. But Tommy and Matt remain “boys” throughout the movie, and Tommy’s psychological immaturity is most vividly demonstrated in his relationships with women. Incapable of domesticity – Matt says he is “not the marrying kind” – Tommy treats women as a form of property, a means to display his new affluence, along with clothes and cars. When Kitty’s (Mae Clark) attempts at domesticity start “getting on my nerves”, he trades up for a more luxurious model, but his relationship with Gwen (Jean Harlow) is never consummated, since Matt interrupts them with the news of Nathan’s death, and Tommy is deprived of the social and sexual opportunity she presents because he has to go and shoot a horse.

The Public Enemy is also a family melodrama, staging the conflict between the two social worlds of the second generation immigrant, dramatising the family conflicts generated by the process of Americanisation. Tommy’s father makes only one appearance in the movie, emerging from the house in police helmet and braces to beat Tommy for theft. His silence intensifies the symbolic identity as both Father and the Law bestowed on him by his improbable costume. He is subsequently absent from the movie, and the law is otherwise present only through the appearance of the garrulous Officer Patrick Burke, who tells Mike that “the worst part” of Tommy’s delinquency “is that he’s been lying to his mother”. Tommy and his elder brother Mike fight in every scene they share until Tommy is in hospital, and for all his moral rectitude, Mike disrupts every opportunity for family harmony.

In its plot and character delineation, The Public Enemy attempted to render its protagonist unattractive, but the picture’s most problematic element was also its most significant commercial achievement: the creation of a new star in James Cagney. To an even greater extent than was true of Edward G. Robinson’s performance in Little Caesar, Cagney’s screen persona was defined by his first starring performance. Alone among the major stars of Classical Hollywood, Cagney’s appeal was almost exclusively to an urban male audience.

Although he did not play a gangster – that is, a character making his living through organised criminal activity and in armed conflict with the police – again until 1938, Cagney did play a series of gamblers, con artists, ex-gangsters and reformed criminals who behaved very much as gangsters, and through these performances he became the mediated, heroic embodiment of the hoodlum: “good-natured, well-dressed, adorned and sophisticated, and above all… American, in the eyes of the gang boy” (8). Some of his most disreputable fans accepted the authenticity of his performance, believing that both he and Robinson were slum boys who had “made good in a big way in the movies”, and eagerly imitating Cagney’s dress and mannerisms, in the process supplying superficial evidence of the movies’ doleful influence on the young (9). Nevertheless, adolescents with more practical experience of criminality recognised the repressive artificiality of narrative closure when they saw it. As one explained, “Sure, I like Little Caesar and Jim Cagney, but dat’s de boloney dey give you in de pitchers. Dey always died or got canned. Day ain’t true” (10).