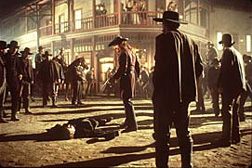 Walter Hill’s films have always mixed the exploration of masculinity with the construction of myth, alongside an investigation of film genres achieved through the referencing of key directors, in particular. Hill began his film career as a second assistant director on such films as Bullitt (1968), The Thomas Crown Affair (1968) and Take the Money and Run (1969), before writing several screenplays including, most notably, Peckinpah’s The Getaway (1972), which was adapted from the Jim Thompson novel. In 1975 he directed and wrote his first feature, the testosterone driven Hard Times starring a laconic Charles Bronson (released in Australia as The Street Fighter), followed by the Jean-Pierre Melville homage The Driver (1978) with Ryan O’Neal as the consummate professional getaway driver pitted against an obsessive cop. Hill’s commercial success began with his third film, The Warriors (1979), which distills a Greek myth (the military expedition recounted by Greek historian Xenophon in Anabasis) through the imagery of comic books. This was consolidated with The Long Riders (1980), Southern Comfort (1981) – a Vietnam allegory set in the Louisiana swamp lands – and his greatest hit, 48 Hours (1982). Streets of Fire (1984) followed but thereafter Hill’s career faltered and he never again achieved the same commercial success, even with the sequel, Another 48 Hours (1990). Hill’s critical standing followed the same trajectory as his commercial success. Nevertheless, no critic has ever been able to satisfactorily analyse the essence of Hill’s filmmaking (and this article makes no pretence at achieving such an ambitious goal); Hill’s penchant for effectively portraying violence frequently impeding a proper understanding of his artistry.

The Long Riders and Wild Bill represent the extremes of the commercial reaction to Hill. The success of The Long Riders partly revived the dormant Western genre, while Wild Bill, after its failure in the United States, was released straight to video in the United Kingdom and Australia, screening on 35mm only once in Melbourne. (1) Yet, although there are differences between The Long Riders and Wild Bill, there are many similarities. Both fit comfortably within Hill’s oeuvre, exploring his major themes from slightly different perspectives. The films tell the stories of seminal Western legends sprinkled with Hill’s characteristically powerful scenes of kinetic violence. The Long Riders deals with the lives of outlaws, the James and Younger brothers, with actual brothers portraying the gang members: James and Stacy Keach play Jesse and Frank James, David, Keith and Robert Carradine feature as Cole, Jim and Bob Younger, Randy and Dennis Quaid play Clell and Ed Miller, and Christopher and Nicholas Guest are Charlie and Bob Ford.

Wild Bill deals with the legend of James Butler Hickok (Jeff Bridges), gunfighter and marshal, who was shot in the back during a poker game. The James Gang and Hickok had become famous during their own lifetimes through having their exploits recounted and exaggerated in dime novels and magazines. (2) In the case of the outlaws in The Long Riders these tales only began to appear after the fateful Northfield raid. Hill follows the essential facts of the ‘histories’ he is recounting while altering many lesser details. For example, Hickok was never romantically linked with Calamity Jane (Ellen Barkin) although legend (and Hill) suggests otherwise (although she did often wear men’s clothing and had a reputation for hard drinking, swearing and promiscuity). Hill turns Belle Shirley/Starr (Pamela Reed) into a prostitute while in reality she was an outlaw, just like Cole Younger the father of her first child. Also, Belle only teamed up with Cherokee Sam Starr after Cole was imprisoned. Hill is like many other filmmakers, altering historic details to improve the dramatic thrust of his films. His changes draw stronger links between the characters as well as enhancing the mythical components of the stories. But, Hill offers only cursory psychological and social explanations for his characters’ motivations. For the outlaws it’s because The Civil War taught them how to rob banks. Historically this is true, as the Younger and the James boys rode with the infamous Quantrill’s Raiders during the war, learning the skills and behaviour necessary to rob banks. Hill also suggests Hickok is primarily motivated to act by the demands of his legend.

Both films use muted colours, especially suffused and richly glowing yellows and browns that give a sepia-like appearance to the films. Wild Bill has sequences in black and white while the final shot in The Long Riders reverts to black and white before fading to black. The films also integrate authentic folk music, in the case of The Long Riders compiled and performed by Hill’s long time collaborator, musicologist Ry Cooder. Both films have detailed set design and scenes are often populated by a throng of men and women. This lends the veneer of an authentic West to both films.

Despite these similarities, the cinematic models referred to by the two films are very different. The Long Riders is fashioned on the works of Hill’s mentor Sam Peckinpah, especially The Wild Bunch (1969). The James Gang wear long white coats just as the members of Peckinpah’s ‘wild bunch’ did, and the opening and final bank robberies are like alternate versions of The Wild Bunch‘s opening robbery. Hill also uses the quintessential Peckinpah technique of filming movement in slow motion during the action sequences and cutting back to that movement several times during the sequence, adding a mesmerising poetry to the violence. Hill even includes a sequence of horses smashing through glass windows similar to a scene in The Wild Bunch. Hill builds his myth of the James Gang on the conventions of the traditional Western (or anti-Western if you prefer), as exemplified by Peckinpah. The leads in the film are anti-heroes, outside the law and yet supported by a local Confederate community. The outlaws are presented as family men, especially the leader Jesse James whose courtship and betrothal forms a major proportion of the earlier part of the film. Jesse is shown as moral. For example, he expels a trigger-happy member from the gang. In contrast, the gang’s nemesis, the Pinkerton Detective Agency, are Yankees who kill indiscriminately, murdering a non-outlaw Younger cousin and Jesse’s 15-year-old intellectually disabled half-brother. As the violence escalates – and the James gang is not above killing several Pinkerton men – tensions in the gang surface and the gang disbands for a period. This creates a schism between the members of the gang and Jesse no longer heeds their advice leading to the disastrous Northfield raid.

Wild Bill is very different in its mythological construction. The model for this film is Altman’s deeply critical Buffalo Bill and The Indians, or Sitting Bull’s History Lesson (1976). The real Hickok toured briefly with Buffalo Bill Cody briefly before being sacked for rashly shooting too close to the actors. Hill shows Hickok as a poor actor unable to take advantage of his notoriety. Whereas The Long Riders‘ narrative is conventionally linear, Wild Bill‘s is more fragmented and obtuse, no doubt contributing to its box office failure in America. The film begins with several shoot-outs establishing Hickok’s reputation, but also indicating that this Western hero seems eager to kill to solve his problems, accidentally killing his deputy and murdering the lover of the woman he loved. After these expository sequences that comprise the film’s first 15 minutes, the film arrives at the last few days of Hickok’s life. Hickok is surrounded by a troupe of sycophants which includes Calamity Jane, an Englishman called Charlie (John Hurt) and a yarn spinning old timer, California Joe (James Gammon), willing to spread Hickok’s fame to whoever will listen. Unlike the James Gang, Hickok has no sense of family. He is also disassociated from his life, suffers from glaucoma, smokes opium and is barely able to interact (socially or sexually) with his friends. Jeff Bridges’ performance as Hickok is uncomfortable to watch, he is awkward and doesn’t emanate a strong presence. In The Long Riders Hill was constructing a myth, here he is, like Altman in Buffalo Bill and the Indians, demolishing a Western myth. Whereas The Long Riders contains many long and medium shots, and is frequently set outdoors and in the country-side, Wild Bill is shot in claustrophobic close-up and is mainly set indoors in the city of Deadwood. Even the exteriors in Wild Bill are oppressive, often filmed at night, or in the rain, or in the mud. The world is shown to be closing in on Hickok. While he had achieved fame from his exaggerated exploits, and his striking appearance – his flowing locks and stylish way of wearing his six-shooters butt forward – Hickok is now weary, trapped by his own myth, having to walk down the centre of a muddy street rather than use the boardwalk, and kill his adversaries although there is no reason for it. He can only escape reality through his mystical dreams and, ultimately, his death.