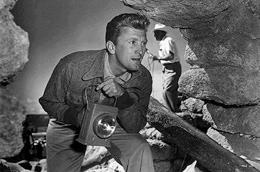 In the 1940s the screenwriting partnership of Charles Brackett and Billy Wilder yielded hit after hit for Paramount. Then in 1950 as Sunset Boulevard opened and Oscar nominations looked certain, Wilder announced that he wanted to call the partnership quits. Ace in the Hole was to be Wilder’s attempt to make a personal film. It remains an extraordinary movie to emerge from a major studio during the period.

The conceit which young radio writer Walter Newman presented Wilder was not original, evoking a 1925 Kentucky cave-in that was front-page news for weeks. Ex-newspaperman Wilder was taken with the possibilities. Chuck Tatum (Kirk Douglas), a down-at-heel newspaperman from New York, rolls into Albuquerque. Some time later a man is accidentally buried alive in a nearby Indian cave dwelling. Deliberately keeping him buried, the newspaperman builds up the story until all America rolls up. Boosting circulation and creating a national sensation, the story puts Tatum back on top. Then Leo Minosa (Richard Benedict) dies. Remorseful, Tatum tells the crowd to go home. The story resonates down the years.

“Written by Billy Wilder… Produced by Billy Wilder”; the credits tout the authorship of a project on which the director experienced less interference than on any other. Ace in the Hole used the traditional tension between the Hollywood plot and the Hollywood audience much as Hitchcock would in Rear Window (1954). It is Wilder’s reflection upon spectatorship and the Hollywood director. Seen in this light, Chuck Tatum becomes Billy Wilder, the fixer who makes the spectacle happen around him. Emerging out of an aesthetic in which the seamless match of movie with experience has seemed immaculate, few other Hollywood films of the time commented upon the way Hollywood films work with such a fruitful and powerful flourish. Having dissected Hollywood itself in Sunset Boulevard, Wilder now lampooned the populist conception of America that for decades Hollywood had naturalized. Neil Sinyard and Adrian Turner perceptively capture the spectacle as metaphor:

The accident spot is transformed into a surrogate cinema – a drive-in to which the masses are drawn…. The cars line up in orderly rows, just as people sit in theatres, their attention focused on the mountain. The spatial relationship between the viewer and the screen is precisely echoed, and to the thousands of spectators the drama on the mountain must resemble a movie…. Audiences of Ace in the Hole and the film’s sponsors must have been aware of this implied criticism – especially Paramount, whose famous mountain logo assumes an ironic significance in this context – and reacted accordingly. (1)

So confident was this personal statement that there was even talk of replacing Paramount’s mountain with a coiled rattlesnake girthed in stars. The studio not only baulked, but sent press agents to every city desk in America to persuade editors that Paramount didn’t believe all journalists to be as crass as Tatum.

It is a measure of Sinyard and Turner’s insight that, in an era when reception studies celebrate the heterogeneity of spectators and their responses, editor Arthur Schmidt’s cuts from action to audience bear out the compelling validity of their reading. And in an age when auteurism has acculturated audiences to regard films as personal visions, we welcome moral complexity in our movies. As in the mesh of realism and moral ambivalence then emerging in the European art film, Wilder’s is a project in which the strategies and tropes of realism mire a complex scenario in apparently actual experience. Shot amidst the swirling dust, sagebrush and interminable desert glare of New Mexico, one can notice the assurance with which Wilder/Tatum fuse their scheme with a particular passing moment. Persuaded by the promise of revenue from a gathering crowd to remain with her ailing husband, the bus pulls away to reveal Lorraine Minosa (Jan Sterling) walking back inside, the vehicle’s daily halt simultaneously eliding and punctuating her inconstant resolve. Suturing us into the movie, this desultory moment also stitches Lorraine into real evolving time. Schmidt cuts from Chuck’s decision to take cub reporter Herbie (Arthur) with him to New York, to the fairground just as a Country and Western singer croons: “We’re Comin’, We’re Comin’, Leo…” Referring to Wilder’s naturalistic direction, Sterling told Ed Sikov: “He just uses your own personality – and the camera.” (2)

Far from the boudoir innuendoes of 1930s Brackett-Wilder collaborations, Ace in the Hole was symptomatic of a taste for brutal modernity manifest in Wilder’s work since before even Double Indemnity (1944). Embodied in Tatum is the ruthless ambition of a society heading for international hegemony as it broke the back of what it had gladly dubbed the ‘American Century.’ By 1950 the suburban American population had grown to 20,872,000, while New York had overtaken London as the world’s leading financial centre. (3) Leaving the soporific crowd in his dust, the pugnacious Tatum evokes New York at a particularly triumphant post-war moment. There is scarcely a shot in the film which doesn’t feature Tatum, and in one of the boldest in any Wilder film, Lang sets up a low angle as the bleeding, defeated journalist collapses at the feet of his editor.

Whilst Ace in the Hole won an award at the Venice Film Festival, it flopped so badly at the American box office that a chastened Wilder went on to mainly adapt hit Broadway plays until 1960. Most Americans either hated the film or stayed away. Reviewers savaged it in turn. In 1997, the film was remade as Mad City (Costa-Gavras). If the title ‘Mad City’ carries a hint that this city is exceptional, it also reminds us that Ace in the Hole‘s title was changed to The Big Carnival, according to the industry convention that ‘Big’ suggested exceptionally immoral doings. Oddly, the studios are still dependent upon yet scared of an unpredictable crowd. And with good reason, perhaps. As Wilder once said, people are people, after all. Fifty years on, some still pause at highway pile-ups….