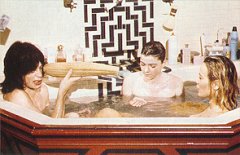 It is virtually impossible to write about Performance without referring to the multi-layered themes, identities and posturing of the ‘performers’ who populate and circulate around the film. This is a film that foregrounds issues of identity, subjectivity and personality, its extraordinarily angular structure providing multiple, crystalline points of entry, exit, engagement and distanciation. Following on from the cool temporal pyrotechnics of Alain Resnais and his ‘pop’ protege, Richard Lester (particularly the Roeg shot Petulia [1968], staged in Haight-Ashbury fuelled San Francisco), the film’s co-directors, Donald Cammell and Nicolas Roeg, create an endlessly turning and returning world, in which characters dissolve into other characters (sometimes literally), acts and gestures are repeated, and in which the barriers between fantasy and reality, past, present and future are seriously tested (in fact, obliterated). Scenes, images and actions are often connected or joined in unexpected or uncertain ways. Seemingly disorganised, casual, atemporal and discontinuous montage and mise en scène, evolves, on repeated viewings, into a rich nexus of motifs, references (from books, as photos on the walls, on the soundtrack) and visual and aural metaphors. In some ways, the great visual metaphor of the film and its branching structure are the images that attempt to visualise the atemporal processes of memory. As the camera appears to crash through layers of time and memory, and seemingly the human brain, the film attempts to connect each of these layers, and give them to us all at once. This is one of the factors that makes Performance a fascinating if somewhat unsatisfactory film – though often brilliantly constructed and shot it reaches for a state that is largely beyond or counter to cinema’s nature (essentially, atemporality and simultaneity). In general, the tone of the film is Borgesian, both circular and endlessly forking, as in the asynchronous opening shots of a screeching jet plane, which initially appear as a ‘jolt’ to the spectator, but find their place in the background skies of several of the film’s penultimate shots.

Performance is not a likeable film. It is difficult to get into the groove of its fragmented and uneven structure, particularly as it lurches and flashes from the gangster/business underworld, the first forty minutes of the film focused on Chas (James Fox), to the bohemian counterculture of Turner’s (Mick Jagger) house. The first section of the film is, in many ways, the most fragmented, and betrays the cuts that Cammell was forced to make to the film. Nevertheless, rather than lamenting and bucking against this imposition – mainly insisted upon so that we get to Jagger earlier – the film’s tactic is to use this cutting to set up a fragmented and blurred sense of place, space and character identity. Editing is also used to create implicit and explicit connections between characters, to flash frames that belong at other points in the story, and to unsettle easy patterns of point of view and identification. This works to fluster the spectator’s expectations, to blur distinctions between what might initially seem to be a gangster film, a trip film, soft-core sex film or a celebrity vanity project.

Performance is also a ‘pop’ film, or, at least, it has often been considered in this way. In this respect it is useful to compare the kind of films associated with some of the key musical celebrities of the 1960s such as Jagger, Bob Dylan and The Beatles. Whereas Lester’s Beatles’ films (A Hard Day’s Night [1964] and Help! [1965]) and D. A. Pennebaker’s Don’t Look Back (a 1967 documentary of Dylan’s 1965 British tour), centrally stage the vibrant charisma and pop celebrity of their star protagonists, Jagger’s film appearances are much more troubling, indistinct and ill-at-ease. This is an understandable characteristic of the self-analytical postmortem of Altamont we see in David and Albert Maysles’ rockumentary Gimme Shelter (1970), but it also defines the fragmentary glimpses and questionable ‘presence’ that distinguishes Jagger’s appearances in Godard’s Sympathy for the Devil/One Plus One (1970) and Performance. Whereas Dylan and The Beatles engage and command the camera, and the space and people around them, Jagger’s presence and his performances are much more undecided, uncommanding even. You can’t take your eyes off Dylan or The Beatles, but it’s often difficult to know if you are even looking at Jagger. Compare Dylan’s wilfully fractured presence in the deliberately evasive and wildly fragmented Eat the Document – a filmed record of his 1966 European tour that was finally compiled by Dylan in the early 70s in seeming homage to Performance – to Jagger’s effete narcissism. Even in the lead role of the charismatic Ned Kelly [1970], Jagger fails to exude a galvanising personality. Performance is a film where everything has its mirror image or double, where appearances can be both deceiving and fleeting, and where it is uncertain where the boundaries of character and actor lie. Thus, Performance utilises the instability of Jagger’s image – particularly its androgyny – to reinforce its ideas of dissolution, archetype and the chimerical nature of identity. (1)

Performance is as challenging to listen to as it is to watch, and it is the soundtrack that is perhaps the most influential and groundbreaking aspect of the film. Rather than being a totally ‘composed’ score or a collection of ‘found’ pop songs, Jack Nitzsche’s soundtrack mixes together disparate and ‘impure’ musical forms, conventional arrangements and snatches of voice, ‘orchestra’, synthesiser and sound effects – presenting itself as both a conventional ‘score’ and counterpoint, rock sampler and an impure mix of pop, orchestral and visionary electronic scoring. The music chosen and composed for the film ranges from proto-rap (The Last Poets), blues, Native American (Buffy Sainte-Marie), synth washes, bottleneck guitar and dulcimer colourings (Ry Cooder), to cribbed Beefheart psych-blues with a touch of tabla. (2) It is not just the range of performers and their interpolation that distinguishes Nitzsche’s score, but the manner in which it interweaves, pulses and competes with the world and actions of the characters. At times the score totally dominates the sonic realm, rising to a peak in Merry Clayton’s signature gospel scream, while at others the music track appears to be coming from another room, is played by Turner on his sound system, propulsively scores the journey of a car into the country, or is performed by the film’s one true musical performer, Mick Jagger. In keeping with the processes of mirroring and contrasting that underscore Performance, Jagger’s two musical performances in the film are radically disparate. Despite expectations, the film takes more than an hour to get to Jagger’s first musical sojourn, a solipsistic, but authentically rootsy version of Robert Johnson’s “Come on in My Kitchen”. This ‘performance’, which is unlike any other moment associated with Jagger’s generally fey and opaque Turner (it actually is self-defining, even galvanising), is contrasted to the surreal “Memo from Turner” sequence. This trippy fantasy, which features Jagger donning a dapper suit and tie and behaving as a gangland boss, plays with the conventions of musical performance. The number is self-consciously synched and shifts vocals from Jagger to one of the other men gathered in the room. As in many other aspects of the film we are uncertain how to regard this sequence and performance – at the moment where Jagger seems furthest from his star persona he sounds most like it. Both of these ‘performances’ contribute to the multiplicity of Turner’s character rather than provide a mark of authenticity (the moment when the ‘real’ Jagger emerges).

Performance tells a relatively straightforward story in a completely cockeyed fashion. Chas, a sadistic underworld pretty boy has to escape from his familiar surroundings and immerse himself in the strange ‘otherworld’ of London counterculture. In the process he loses a sense of himself, his identity dissolving and merging into the opaque world and character of Turner. With its somewhat antiquated themes, techniques and characters, Performance is not a fun film. Although it seems, at one level, to sum up the Zeitgeist, it is also a singular and insular work. The film can be linked to such early ’70s films as Mike Hodges’ Get Carter (1971) and similarly themed ’90s films as Todd Haynes’ The Velvet Goldmine (1998), but the slipperiness of its hybridisation of styles, genres and performances make it an angular and imperfect point of reference (but an exemplary ‘queer’ film). Learning the lessons of Performance, Roeg went onto a much lauded career as an art filmmaker, while Jagger’s acting career never really came to much. Though both soon turned up in Australia to respectively make and star in Walkabout (1971) and Ned Kelly. Cammell and Fox’s subsequent careers reflect the more traumatic and transformative effects of Performance. Fox dropped out of acting to become an evangelist. Cammell struggled to complete Performance the way he wanted and to make films for the twenty-five years. He committed suicide in the Hollywood Hills in 1996.