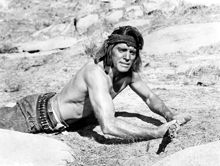 The journey of Massai (Burt Lancaster) in Robert Aldrich’s Apache has nothing to do with the fearless African tribe, but the association with these legendary warriors is no accident. Apache centres on issues of tribal identification, the warrior state and individualism as Aldrich turns his attention to the capitulation of the American Indian to the domination of the white settlers. The surrender of Geronimo early in the film signposts the defeat of the Native American and the victory of the white man; the conclusion to these tribal battles. But right from the opening titles, we are made aware of Massai’s divergence from either tribe – he exists apart, alone, and his story has apparently passed into legend. His mad dash through the tense surrender of the Apache Chief functions as both protest and death wish; a refusal to accept the death of his culture, and a desire to die along with it. His subsequent capture sets up the clash with the first of his many enemies, Al Sieber (John McIntire). Sieber takes a cruel swipe at the proud Apache Massai once he is chained and subdued: “To die in battle would be a sweet death, a warrior’s death.But you’re not a warrior anymore. You’re just a whipped Injun”. With his tribal identity lost, his incarceration strips Massai of his own definition of himself – he is even denied the death deemed suitable and noble in such circumstances. What this establishes, though, is Massai’s journey for redefinition, his search for his own territory in terms of both self-concept and physical domain.

The destruction of the warrior state forces the loss of Indian identity, and it is Massai’s escape from the train destined for Florida which prompts his search for self. Finding himself in St. Louis, Massai confronts the world of the white man. Aldrich pans slowly as Massai peers into window after window – diners, images of opulence and wealth, drunks, shoeshines and, the most significant of all, workers in a Chinese Laundry. Here is a tribe ostensibly integrated into the white man’s world, albeit performing menial tasks. But we know this can never be the way for Massai; his pride and individuality prevent him from adopting the position of those in the laundry. Alongside Massai’s search for his own, individualised state, Aldrich sets up numerous templates for integration. Later, in Oklahoma, Massai stumbles upon a Cherokee farmer who shows him kindness and convinces Massai that he could, in fact, live in harmony with the whites if he takes to planting corn and building houses – essentially adopting the white man’s ways. Initially scornful, Massai along with his squaw Nalinle (Jean Peters) set about establishing a new tribe in a new land, a sort of pastiche of cultures and styles. Nalinle steals extra corn and a pair of trousers for Massai, and he becomes a curious blend of white man and Indian, fiercely independent of, but ultimately influenced by, the two tribes he rejects. With his heritage subsumed, no longer warrior, no longer Apache, and certainly not subscribing wholesale to white methodology, Massai and Nalinle become something separate and distinct from the other tribes they have encountered. They appropriate elements from them all to create a prosperous, nameless tribe. The prospect of birth, and the flourishing corn crop, emphasises this period of fertility, of growth. Removed from the rest of the world, and undetected by the manhunt headed by Sieber and Nalinle’s spurned beau Hondo (Charles Buchinsky – later Bronson), Massai and Nalinle are free to create their own rules and traditions, their own warrior state, free from the dominance of the white man, and the shame of the surrender of the Apache.

With its careful exploration of cultural isolation and a rejection of the more traditional white hero of countless other entries in this genre, Aldrich’s Apache is a rare thing. In this film we are actively encouraged to see the world through the eyes of Massai, the Apache warrior who fights against white civilisation and Indian surrender. That he is sympathetic is perhaps going too far – Aldrich is careful to point out his stubbornness, his paranoid insistence that the world is out to get him. His flagrant mistreatment and mistrust of the stoically loyal Nalinle also prevents him from becoming a squeaky-clean hero. Yet Massai possesses a certainty, a nobility that is admirable. Whilst Sieber and Hondo appear flat, earthy, placed squarely on terra firma, Massai strikes a far loftier pose, framed against an endless blue sky, jumping fleet-footed over rocks and chasms, gazing at snow capped peaks and rocky monoliths. The contrast with his rival Hondo is stark and immediate. Hondo accepts the white man’s ways, adopts the army uniform, and people comment on the shininess of his buttons. Essentially, Aldrich is at pains to paint Hondo as a sell-out, a man who has betrayed his heritage, and the clothes he now wears are a shiny, superficial façade that merely conceals the vacuum where his heritage, his people, used to reside. Hondo’s importance to the film, though, is perhaps obscured by the altered conclusion to Apache, an ending imposed upon Aldrich by the studio.

The original script was tailored to a showdown between Hondo and Massai – the symbol of integration versus that of individualism, which is essentially the thematic battle that wages throughout Apache. Hondo was to shoot Massai, thus elevating Lancaster’s character into the stuff of legend, as has been made apparent from the opening frames of the film. Indeed, his death is carefully foreshadowed throughout, with Massai’s persistent assertions that eventually he will be caught, that he will inevitably be punished for defying the order of both tribes: “Every white man, every Indian is my enemy. I cannot kill them all and some day they will kill me”. Yet under pressure from United Artists in the final days of shooting a second, more optimistically upbeat ending, Aldrich soon learnt that “if you shoot two (endings), they will always use the other one, never yours”. (1) This tampering shifts the focus and intent of the film, but creates an effective compromise between the warring factions. With Massai embracing new life and regeneration, Sieber is prepared to allow him his own space, declaring that Massai “just called off the war”. In this remote corner of America, Massai and Nalinle will be free to nurture their new life and the individual does in fact triumph in his defiance of the codes imposed upon him by others. So whilst the interference of the studio has in some ways negated Aldrich’s vision for the film, and renders some of the narrative threads redundant, it does still manage to achieve something new and unexpected. If nothing else, Aldrich’s Apache blends the conventional requirements of the studio with a critical perspective on the impact of white civilisation and its role in the disempowerment of the Native American. By its conclusion, it’s clear that Apache recognises and celebrates the worth and value in a distinct, individualised state, a place free from the oppression of white culture and the shame of the capitulation of Geronimo and the once noble Apache tribe.