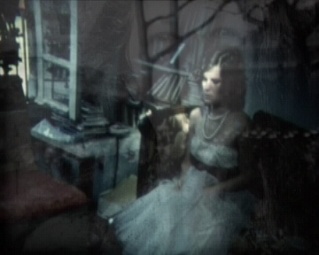 In a field dominated by intellectual showmanship and hermetic eccentricity, Viviane Vagh’s filmmaking speaks with a voice as familiar as it is poetic. Her latest film, Free Women/Femmes libres (2009), makes an appeal that needs neither explanation nor defending. A clear humanist message, however, is not born of simplistic material. A multi-talented artist, Vagh deftly weaves into the film multiple layers of dance, photography, music, theatrical and performance art, and poetry in French and in English. Free Women would be deemed universal if its sensibility were not genuinely feminine. Vagh’s lyrical persona wonders how her gender connects her to all women – in suffering, in servitude, as victim, as mother, as female body – wonders if she carries in her womb and in her breasts the pain, love and pleasure of all those others.

Viviane Vagh intends the film to be “a statement on the fact that women are still to be freed”. It calls all women to “share in the potential to be free human beings in their expression and in themselves”. Such a noble theme sounds ponderous in prose, but the film avoids didacticism beyond its title; the mode here is compassionate. Sensual bodily expression, punctual phrases and faces appeal primarily to the emotions. There is not one but many women in the film: a woman breastfeeding, exhibitionist dancers, various actresses on stage; we catch a glimpse of a girl from Vagh’s Petite series; in the interior of a Parisian flat reflects a young woman wearing a white dress; and the filmmaker inserts her own image under the title and in two super-imposed close-ups. An extreme close-up of Vagh’s eye and another of her speaking mouth establish her first person poetic persona. The able layering of so many images, which is the backbone of the piece, conveys the inner thoughts of this poetic eye. Her interior and exterior selves must come to terms within its gaze. The eye’s imagination not only wonders from youth to old age, but across cultures. There are the anxious movements of a modern dancer whose legs struggle around a white sash; her rhythms are set in harmony with the pivoting hips of a dancer in sequined Persian dress. Footage of a military parade evokes not the horror of war but frustration at its persistence, and anxiety over its source. World music sounds of African drums, church bells, a didgeridoo, European violins and then Middle Eastern strings, and a didgeridoo encroach again and again toward one cosmopolitan beat. The music is composed by Jonathan Levine, and the didgeridoo played by Vagh, who also takes credit for the dense soundtrack. 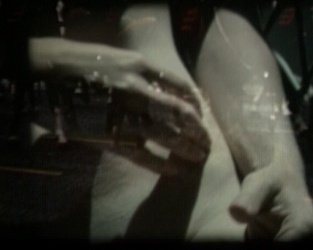 As for the blend of languages, Vagh delivers the unimposing voice-over in the same style she developed in earlier films: reflecting poetic fragments from French into English, and vice-versa. One doesn’t feel the suffocation of not having subtitles, or the parroting of a translator that deflates every word. In fact, repetition and translation create the poetic instrument of the discourse. This is most interesting when the French and the English are not equivalent, of course, being out of step for phonetic or other motivations; but she does not indulge as much in this film as in previous ones. This critic’s literary passion would love to see Vagh develop the bilingual voice-over more radically, although such wordplay does not belong in this film.

Considered singly, every element in Free Women is quite direct and unsubtle. Yet, when seen as an ensemble, none carries the melody. This harmony is what makes the film accessible without forfeiting its poetic integrity. It comes as no surprise that the artist herself has myriad roots: backgrounds in theatre and dance, half-French and half-Australian nationality, an American spouse and a Greek mother. To belabour the point, even the format of the film is diverse – taken from Super 8, Standard 8mm, 16mm and video footage – and with music both electronic and acoustic. Here is the opposite of purism.