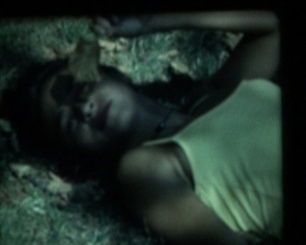 A young girl on a sunny day. Gracefully, she comes and goes. Does she know she’s being filmed? Does she know that, as her image multiplies on the screen, she seems to disappear?

A series of close-ups: a young girl is in the foreground. See her. Look at her. What does it take to really observe someone? After a moment, you will lose her: she’s so present – so big – on the screen that you won’t notice her anymore.

Viviane Vagh has captured, in this short and elegant film, the poetry of dissolution. Now you see me, now you don’t (2007) can be an ode to life, as well as an elegy for beauty. Enthralling music by Jonathan Levine, along with the smooth voice of the filmmaker, contribute to give a particular tempo. A call for contemplation: presence/absence, power/loss. The film, thus, renders the poetry of all things that fly away.

Is this series of motion pictures a game? If so, here’s how it works. Let us capture the fragility of life itself. Let us catch the elusive. Let us celebrate Mystery. The young girl in the film symbolizes all that is vital: youth, beauty, summer, colour. The present moment. All of what we don’t fully understand as it unfolds.

The (seventh) Art of seeing 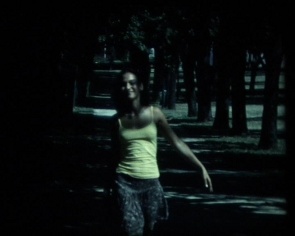 Now you see me, now you don’t is a very poetic work of art, but also a scientific proposition. It actually works as a device for depicting, almost voluptuously, the mechanism of seeing motion pictures.

On the one hand, the editing is shown as an exhilarating continuation of the pleasure of filming. The images entangle and unfold in a harmonious and precise chord. On the other hand, we understand that in order to see a whole world in motion, we need fragments of nothingness. Cinema and its 24 moments of darkness per second.

That is why we need to see the young girl disappear, in order to fully see her, and maybe try to understand how cinema works. If her absence is embodied, it is because the filmmaker deploys all of the cinematic power. And thus, the young girl could epitomize cinema itself.

But it could just be a game.

Now the young girl walks away and you suddenly realize that you would like to look at her again. She seems to be deserting the stage and the music returns, more captivating than ever. The feminine whispers engulf an empty path. Why do we (only) love what we’ve missed? As the girl turns away, we grasp her presence. We see her again, but we don’t see her anymore.

I thought it could simply be a game, then. It could be cinema, or love, or desire. It may as well be life.