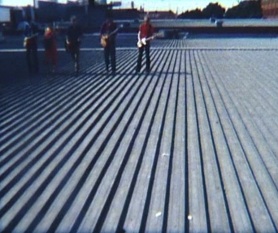 Post-punk’s discursive watchword was “demystification”: unpack the “meaning behind the moaning” (as Public Image Ltd’s John Lydon would sing in “Careering”), bypass the industrial machinations of the music industry, self-publish and self-actualise. If post-punk had a chronologically correct visual correspondent, it was the year-zero of No Wave filmmaking in New York, but in actuality the independent æsthetic fostered by post-punk had already been manifest in the work of such earlier American underground filmmakers as Maya Deren, Stan Brakhage, Jack Smith and Kenneth Anger.

Thus, it seems appropriate that both the non-narrative “blipvert” culture of the music video should owe so much to the formal and technical breakthroughs advanced by underground film, and that the Post-Punk Internationale would continually foster entente cordiale with film and video.

Interestingly, post-punk’s divesting of major finance from the process of music making and dissemination wasn’t immediately matched by a similar move within filmmaking technology; thus post-punk managed, for a time, to invert this hierarchy. But given the natural tendency for post-punk’s more interrogative fringes to gather in university arts and film departments – there is a strong case to be made for film theory being one of the most potent actualisers of post-punk’s self-interrogative drive – access to equipment was, for some, a simple matter of campus life.

Clinton Walker’s Inner City Sound (1), for many the sacred text of “Punk and Post-Punk in Australia, 1976-85”, is a visual feast, but, interestingly, its photographic memory of the time slips into three predictable camps: the photo-vérité capture of live performance or rehearsal; the posed rock ’n’ roll shot; and perhaps most damningly, the “wacky”/“deconstructionist” presentation of those on the margins (Systematics, Tsk Tsk Tsk, etc.). Walker is unnecessarily churlish about acts like these, or Slugfuckers, whose excellent presentation (imagine the Kuchar brothers just out of high school) is dismissed by Walker, describing them as appearing “at the Sculpture Centre in Sydney, which says something in itself”. But there is a great photo in the book from the archives of Tom Ellard’s Severed Heads, which enacts a perfect “bedsit Jamie Reid” or Linder détournement – with its oversized, garish eyes and mouth pasted on a seated body, it’s a dream vision of Greil Marcus’ brain matter. 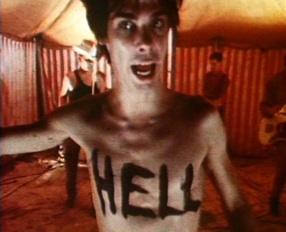 Indeed, post-punk was always a literate, referential form and many post-punk music videos lay their references on pretty thickly. The Birthday Party’s “Nick the Stripper” has its moments – its Rabelaisian, carnivalesque celebration of lower bodily stratum crosses over into Grand Guignol and “Living Dead” parody. The video is an index of the merrily abject, from Nick Cave’s insect-thin, pale body, through the bleached-out skin and sunken cheeks of guitarist Rowland S. Howard, the Lord of the Flies’ pig’s head, etc. The lurid colour of the video reflects Simon Reynolds and Joy Press’ observation in The Sex Revolts that, in The Birthday Party’s songs, “the eye is jaundiced, the nostril’s aghast; the lyrics are a psychedelic malaise of squalid imagery, teeming with dull hues, slimy textures, foul odours, which are matched by the febrile but lugubrious jazz-punk music” (2). The Laughing Clowns’ “Holy Joe” is perhaps more successful, at least in its intent: by placing the group within a setting that clearly references German expressionism – this is The Cabinet Of Dr Caligari 101 – the video suggests, correctly, the continental, arch and seemingly impenetrable approach of Ed Kuepper’s finest group.

Elsewhere in Melbourne, the Clifton Hill Community Music Centre (CHCMC) was fostering a particularly knowing, articulate, theory-dense take on the collision of post-punk and postmodernism. Philip Brophy’s Tsk Tsk Tsk took on the formal properties of rock music in performance pieces that addressed the structural dimensions of the rock process, stripping the form of any of its emotional qualities and reducing it to pure signification: this constitutes a particularly brutal and damning de-mystification. Essendon Airport crossed the systems music of Steve Reich with easy listening and articulate pop to essay trinket-like pieces whose structure was only fully explained in performance – think, for example, of the concert where Robert Goodge traced a map of Clifton Hill by foot, his playing broadcast back into the space, where it was accompanied by David Chesworth. The visual pay-off is the presence-through-absence of Goodge, his psycho-geographic mapping of the city, and his return to ontological “presence” as he re-enters the space.

At its best, the CHCMC was all about multi-arts, or multi-media – there was also some direct crossover with the Super-8 film people in Melbourne, as Ernie Althoff notes:

Even the most conventional ensembles surprised audiences with music-theatre pieces every now and then. Tableau, drama, mime and dance were incorporated inventively into concerts, and much work was done in the Super-8 film and video fields. Indeed, the Super-8 film people saw the ethics of CHCMC aptly befitting their medium. Film and/or video concerts, either combined with music or performance or just shown straight, were featured in all the years of the Centre’s operation. Colour slides were also used. Installations activated by audience or performers were constructed. (3)

Ros Bandt’s Coathanger Event was a particularly successful example of this cross-pollination: a jumbled assemblage of coat hangers, the audio outcome of their real-time noise interaction amplified and then translated to the visual realm by their channelling through a Lissajous figure on various television screens. 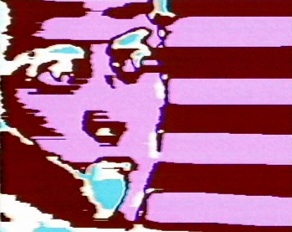 Australian post-punk eventually followed the curve dictated by its English peers – “conform to deform”, engage in entry-ism. Much like Scritti Politti’s shift from Marxist rigour to postmodern surface sheen, most of the members of Essendon Airport eventually re-grouped as dance act I’m Talking, whose own approach to the visual (expensive videos and lip-synching on Countdown) worked at 180-degrees from their post-punk history. But I like to think that the de-mystificatory promise and exploratory drive of post-punk resonated throughout the plastic 1980s, that most un-august of decades: in many ways, the moment this mode of creativity finally collided head on with “consensus reality” was during Severed Heads’ in-studio live appearance for ABC TV’s Rock Arena in 1986. This may be chronologically ex post facto, but it’s also the culmination of one of Tom Ellard and company’s most fruitful, feverish passages of creative engagement.

At this point in time, Severed Heads had begun their peculiar rapprochement with dance music (you can hear the full-blown dance-floor re-toolings of 1988’s “Greater Reward” implicitly in songs like “Petrol” and “Hot With Fleas”), but they were still working with the primitive video synthesisers and audio-visual crossover material that placed them firmly within the post-industrial/noise experimentalist camp. Hence, this footage (which can be found on YouTube) is lurid, gorgeous, fuzzy, distorted, grainy, rough, ready, hot under the collar – beautifully mangled. Here’s final proof, not only that post-punk was a geographically irreducible beast (Severed Heads were from Sydney), but also that its hard-won lessons resonated well beyond the temporal frame placed on it by exterior forces.