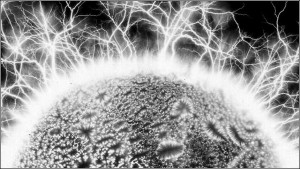 Melbourne specifically, and Australia more generally, has for many years suffered from the absence of any kind of dedicated forum for the survey of contemporary and international experimental moving image. Locally, in recent years the concessions provided to experimental works by the city’s flagship festivals (MIFF, St Kilda FF, MUFF) and even ACMI have sometimes seemed to be almost borne of an embarrassed sense of obligation. Happily, for several years the Melbourne International Animation Festival (MIAF) has distinguished itself by its support for works at the furthest margins of its cartoon mandate. The Abstract Panorama program of MIAF’s 2008 edition was typical of a festival rich in epiphanies, and motivated by an extravagantly catholic curatorial logic.

Among the multiple highlights: new works from Thorsten Fleisch, and Felix Dufour-Laperrière (working in collaboration with Dominic Etienne Simard). Head, by the latter duo, played like an elegy both for the passing of analogue film, and of the twentieth century to which that medium was so ardently bound. Unfortunately, the work suffered by its screening from a digital copy, which might have illustrated their point, but also diminished the quality of the image. Dufour-Laperrière’s website testifies to his prolific creativity, and I hope MIAF will continue to provide a forum for his remarkable works. Conversely, Energie was much better served by digital format. Fleisch can make justifiable claims to working alchemical miracles through visual media; typical of the filmmaker’s obsessive concern for materiality, this work results from 30,000 sheets of photographic paper exposed to the high-voltage electron beam of a cathode ray tube. It’s a beautiful work in starkly contrasting black and white, with a fibrous reticule arcing wildly about a pulsing orb. In its documentary account of naked element, it makes solar flares seem twee and torpid in comparison. Jens Theile’s score is an aptly discordant crackle-and-zap.

I guess I can confess to being exasperated by the Pavlovian recourse to applause after a film in these programs. It’s a convention that belongs with the performing arts, and my own feeling is that unless the filmmakers are present, as an audience we should confine ourselves to genuinely spontaneous and convulsive appreciations (tears, laughter – even a boisterous shout, between shorts). Once the program starts, clapping seems to me to have about as much place in the cinema as idle chit-chat to your neighbour. So I found a kind of rancorous satisfaction in the sucker-punch denouement of Jonathon Kirk’s powerful I’ve Got A Guy Running. A discreet abstraction in cubist monochrome, it starts far beneath the threshold of our conscious recognition, and comes intriguingly closer to making visible sense. The soundtrack lends matching distortions that occasionally suggest what might be human speech. The ending wasn’t completely unexpected, but the effect on the audience was audibly stunning: a chorus of gasps. No applause for this one, but I‘ll confidently venture that it was the most affecting work in the program. Ultimately, the film provides another, and exceptional, satisfaction: its courage to acknowledge another material reality, and an apt reminder of the manifold evils committed remotely, in our name, and upon which our civilisation is contingent.

It’s in this context that I felt a little ambivalent about the work of Jean Detheux, Lost Shade. This one is a kind of Rorschach-flicker, with images rapidly alternating, positive-to-negative, either side of a central vertical axis. The source material is composed of footage of military aeronautics – and so the film, which employs its effect in a manner that is more akin to Paul Sharits than Martin Arnold, might be thought to hazard the charge of aestheticising violence. An ethical dialogue could be framed around the use of found footage, and illustrated by these two works, both very fine, but working at the opposed poles of dialectical and materialist approaches… its central question being: what kind of responsibilities (if any) are adopted by the filmmaker in their choice of footage? 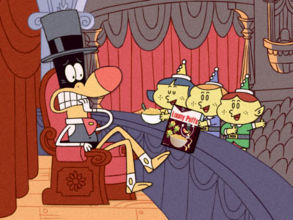 MIAF’s Late Night Bizarre program provides a survey of more figurative extremities in contemporary animation. The Augenblick Studio was represented by episodes from their Golden Age suite of sleazy parodies, in loving mockery of North American cartoons of yore. Somewhat akin to Robert Marianetti, David Wachtenheim & Glen Steinmacher’s Journey to the Disney Vault (MIAF 2006), it’s also an echo of the infamously litigious “Disneyland Memorial Orgy” poster and Sky Pirates comix. In each of these travesties the humour proceeds from the tension between a devoted attention to replicating a familiar graphic milieu, and the tabloid revelation of drug bacchanals, poly-sexual perversions and downright bastardry. Aaron Augenblick and his crew are probably the most sophisticated Flash animators on their continent & their new television series, Superjail (Christy Karacas, helming) describes a landmark precedent for creative cartooning. The Studio’s consistent form is nihilistic hilarity rendered in exquisite high style; it’s probably significant that Augenblick studied at New York’s School of Visual Art, where two of the avatars of comic art, Gary Panter and Art Spiegelman, are both on staff.

A different kind of tension supports the narrative arc of another Flash animation, Igor Coric and Steve Lieberman’s Global Warming: a cheerful absurdism that beholds the fatuous ubiquity of climate change (in the media, as subject for polite conversation) with a wry regard. The charmingly stylised design is redolent of the Zagreb school, but the hooks are in the infectious jaunt of the lyrical accompaniment. It could almost function as a neo-con mis-infomercial if it wasn’t so ludicrous. 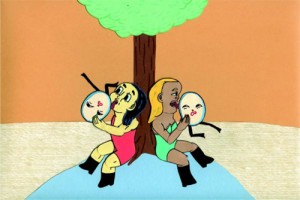 Other works were notable for a whimsical outsider-vision, with a visual logic suggestive of art brut. Canadian Amy Lockhart’s Walk For Walk is something of a grotesque, albeit compellingly so. More innocent infantilisms motivate Milla Nybondas’ completely disarming The Elastic Barber, which achieves an outlandish folk-myth resonance from a modest initial premise. Federico Solmi and Russell Lowe’s The Evil Empire demands a further mention in this same respect; the “Vatican nasty” narrative is very slight, but Solmi’s design and Lowe’s dizzying spatial illusions are both extraordinary. As with Augenblick, all these filmmakers are elaborating on a heritage of fine art and national animation styles, and their stories are visualised with erudite sophistication as a result.

MIAF made its own accommodations to this heritage in the San Francisco Bay Area Historical program, co-curated by Festival Director Malcolm Turner and US animation partisan Karl Cohen. Cohen’s contributions to animation scholarship are formidable, both as a stalwart of the Association Internationale du Film d’Animation (ASIFA) organisation and as the author of the revelatory Forbidden Animation: Censored Cartoons and Blacklisted Animators in America. This program delivered its own epiphanies: several varieties of delinquent genius exemplified by the lysergic paraphilia of Vince Collins’ Malice In Wonderland (1982), the atavistic stop-motion slapstick of Willis O’Brien’s Pre-Historic Poultry (1917) and an episode of Jay Ward’s pioneering television cartoon, Crusader Rabbit (1950). While Seth Orlitzky’s computer-generated Ballet Frenetic (1989) has been overtaken by intervening years, the inclusion of Marcy Page’s early Paradisia (1987) was a rather neat acknowledgement of the NFBC Producer and Festival guest.

In his 8th year as MIAF Director, Turner has in no way given the impression that he has exhausted his ideas, or passion for animation. MIAF’s programming is considered and extensive in the scope of its survey (dozens of other works deserve a more detailed reckoning, but someone else will have to provide it). This year’s Festival benefited from programs drawn from SIGGRAPH and the US Visual Music Marathon, as well as a long-standing partnership with Madman Entertainment (in the form of the omnibus film, Fear(s) of the Dark, which I couldn’t attend, but am eagerly anticipating). In his introduction to the Abstract Panorama program, Director Turner alluded to intentions for a future program of work from the Austrian distributor, sixpack: something else to be excited about, and indicative of a Festival which embraces animation in its broadest conception.